million people have fled violence and persecution across the region. It is one of the world's fastest-growing humanitarian crises.

million people in dire need of humanitarian assistance - five million of them are children.

people in Burkina Faso have been displaced inside the country in 2020.

About the Crisis in the Sahel

The Sahel, a region in Africa that includes the countries of Burkina Faso, Mali and Niger, is experiencing one of the world’s most severe humanitarian and protection crises.

Indiscriminate attacks by armed groups and militias, insecurity, widespread human right violations - including gender-based violence and violence against children - and the effects of climate change have triggered massive displacements across the region. In less than two years, at least 1.8 million people have been internally displaced and more than 845,000 have sought refuge in neighboring countries – including some 650,000 people uprooted in the past year alone. The crisis is already affecting neighboring countries, such as Mauritania and Chad, and risks spilling over to Benin, Côte d’Ivoire, Ghana and Togo.

The coronavirus pandemic (COVID-19) has posed additional challenges in this already dire situation. Despite low number of cases reported, the pandemic risks overwhelming national health capacities and wreaking havoc among the most vulnerable communities. So far, lockdowns and other preventive measures have exacerbated food insecurity in areas hosting refugees and IDPs, pushing at least 6 million people into extreme poverty and 4.8 million to suffer from acute malnutrition. 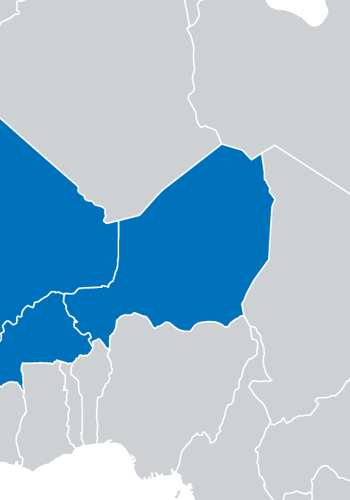 Sahel: One of the world's fastest-growing humanitarian crises

How to Help Refugees in the Sahel Region

UNHCR is on the ground aiding refugees in the Sahel region, but resources are stretched too thin. Your gift will offer hope for a safe future.

What is UNHCR doing to help refugees in the Sahel?

UNHCR, the UN Refugee Agency, is scaling up efforts to meet the growing demands of vulnerable populations through the provision of emergency shelter, lifesaving relief items, healthcare and education services as well as psychological support to victims of sexual and gender-based violence (SVBG).

The UN Refugee Agency is also working with the governments of Burkina Faso, Chad, Mali, Mauritania and Niger to launch an intergovernmental platform, called Bamako Process, aimed at strengthening the security and protection of vulnerable populations across the region.

See all stories about the Sahel refugee crisis > The central Sahel is one of the world’s most vulnerable regions to the effects of climate change, with temperature increases that are 1.5 higher than the global average.

With 80 percent of the population depending on agriculture and livestock activities, the changes in rainfall patterns and frequency of drought and floods -all product of the extreme temperatures- are threatening livelihoods and exacerbating food insecurity in the region. This, in turn, threatens to increase conflict, instability and more displacement across the region.