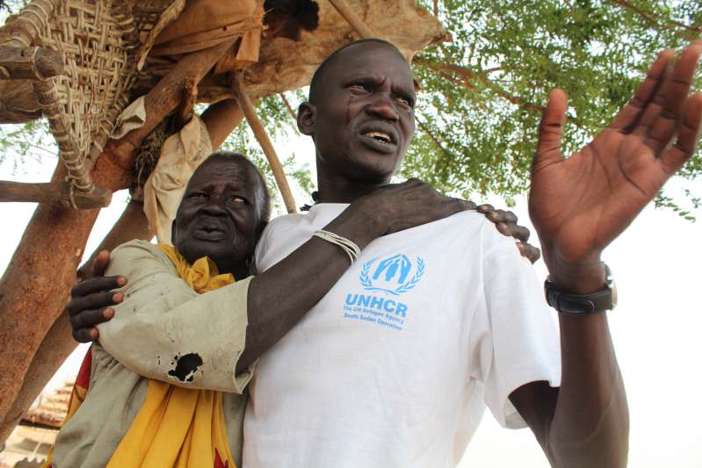 Guor's mother clings to him like a child during their first meeting in two decades. © UNHCR/T.Ongaro

It was all too much for his mother, who collapsed when Guor arrived at Pan de Thon village in South Sudan's Unity state. She had last seen him in 1993, when he went to live with relatives in Khartoum before fleeing for his life at the height of the north-south war when the country was part of Sudan.

Guor, a United States-based refugee whose reunion was made possible by UNHCR, picked his mother up. Weeping, they hugged under the hot sun. "Guor? Is it you, my son?" she asked.

"It is me, Mama," replied the 29-year-old, who ran in the 2012 marathon under the Olympic flag because South Sudan (the world's youngest nation) did not have a recognized national Olympic committee. The runner without a country came 47th in a time of 2 hours, 19 minutes and 32 seconds.

Arm in arm, Guor and his mother started to get to know each other once more. In a reversal of roles, Guor's mother Athieng Majak Kon clung to him like a child. Getting over her shock, she soon broke into a stream of chatter and took him round the family home, pointing out where he was born.

The news soon spread through the village that a son had returned from across the seas. A sprightly old man leapt around with a stick and sang – it was Guor's father Mading Maker Deng. He rubbed cow dung ash on his son's forehead in a traditional sign of welcome. Later, he recounted how as a young man he had chased giraffe barefoot across the plains, taking credit for his son's athletic prowess.

But the joy was tinged with sadness. Guor was forced to flee Sudan because of the devastating 1983-2005 civil war, which left hundreds of thousands of people dead, including eight of his siblings.

Unity state was a dangerous place when he was young. And the rural areas lacked basic services such as education and health care. So, when he was eight years old, Guor's mother sent him to live with an uncle in Khartoum.

But southerners were regarded with suspicion in the Sudan capital and often accused of spying. Guor and his relatives fled to Egypt, unnerved by the persecution and fearful for their lives. It was a difficult time, but in 2001 they were resettled in the United States.

The 16-year-old took full advantage of the educational opportunities and his athletics ability was soon noted by his high school teachers. Guor went to Iowa State University on a scholarship, graduating with a BS in Chemistry in 2011. Then came the Olympics.

He was not ready to run for South Sudan, but he had applied for US citizenship and this was being processed. A social media campaign rallied support for Guor and last August, a week before the marathon, the International Olympic Committee said he could run as an independent athlete.

Surrounded by loving relatives, Guor mused about the conflict that had forced his family apart and caused so much suffering. "The human cost of war is difficult to measure," he said. "My siblings died of treatable diseases . . . My mother's children should have been her social security. Instead, she was left to fend for herself, right into her old age," Guor noted.

"Conflict damages families," he continued. "Our country is blessed with untold wealth. Yet, death and wasted potential are the price that families – entire communities – were made to pay by the conflict. I have not met a compatriot who was not affected by the war. My mother's situation is a case in point."

Looking gently at his mother, he said he was shaken by how much she had aged, weighed down by the strain of a harsh rural life. With both her children absent – Guor's only surviving brother lives in the South Sudan capital, Juba – his old mother struggled to take care of herself.

As a child, Guor had helped her with household chores as well as growing maize, millet and sorghum in the backyard and harvesting wild rice for her granary in the dry season. He learned early that it was a child's duty to care for their mother.

Family and friends gathered under a neem tree in his father's yard and talked about the old days. It was the onset of the rainy season and he recalled caring for his father's livestock on these plains.

But the young man did not forget the people who had helped him over the years, above all his foster parents in the United States. "They are my family," he said. "From them I received guidance to grow into a responsible adult. They helped me push my limits to receive a university education. The families that fostered me and those who mentored me helped make me who I am today," he added.

"I am especially grateful to UNHCR for bringing me home to the two most important people in my life – my mother and my father," he said, adding that had they not sent him away he may have died like his siblings. For his mother, Guor's visit ended years of uncertainty. "Thank you for bringing Guor home. I have seen my son. My heart has finally rested," she said.

* Marial is the name of his uncle, who brought Guor to the United States. As part of the process for obtaining US citizenship, he now uses his original full name: Guor Mading Maker