The UN Refugee Agency is calling on donors around to world to contribute $145 million to fund its emergency aid operation for tens of thousands of civilians fleeing fighting in two Sudan states and seeking shelter in Ethiopia and South Sudan.

Zeneib was living in her husband's village in Sudan's Blue Nile state when it was attacked. She lost three brothers then endured tremendous hardship on the journey to Ethiopia with her children.

"The amount is meant to cover the needs of up to 185,000 Sudanese refugees in the two countries," UNHCR spokesman Adrian Edwards told journalists in Geneva, adding that it came on top of top of UNHCR's 2012 budget of $269.1 million for programs in Ethiopia and South Sudan.

Heavy fighting between the Sudanese Armed Forces and the Sudan People's Liberation Movement-North (SPLM-North) in South Kordofan and Blue Nile states has driven more than 130,000 Sudanese refugees into Ethiopia and South Sudan.

"UNHCR anticipates continuing arrivals over the next months with clashes continuing and humanitarian conditions deteriorating in the conflict zones," Edwards said. "More than 30,000 refugees have already been registered in the two countries so far this year, a pace of arrival not foreseen during the regular 2012 planning cycle," he added.

"The Sudanese emergency has been simmering for months, overshadowed by other crises on the continent," said George Okoth-Obbo, director of the Africa Bureau in UNHCR. "The needs are real and urgent, with refugees having to walk for weeks to reach safety, running out of food and water, and living in the bush." 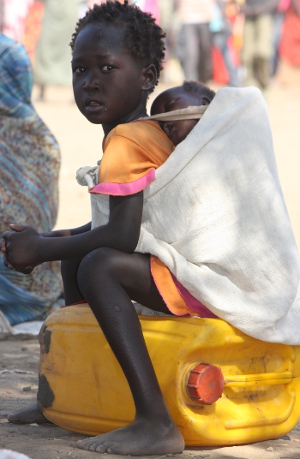 A young refugee carries her infant sibling while sitting on a water can.

Many of the new arrivals are in remote border areas that are close to the fighting. In South Sudan, Elfoj in Upper Nile state and Yida refugee settlement in Unity state have both seen air raids. UNHCR has relocated some 20,000 refugees from unsafe border sites since January 6, moving them to four new settlements.

In Ethiopia's Assosa region, the pace of relocation from border areas has also picked up in recent weeks as a result of fighting in Blue Nile and the end of the harvest season for refugee farmers living near the border. "The two existing camps have reached full capacity and new arrivals are being sheltered at a transit centre until a third camp can be built," Edwards noted.

In addition to urgent relocation from volatile border areas, UNHCR's emergency response includes the provision of basic relief items and services, registration and child protection. In December, the refugee agency mounted a massive airlift to bring in supplies – tents, plastic sheets, jerry cans, kitchen sets and more – to the refugees in South Sudan.

UNHCR will also use the funds to build and service additional refugee settlements, improve road access and stockpile relief supplies ahead of the rainy season starting in April.