The sun is still rising in the Congolese sky, but Jean is already busy cleaning the small garden in front of his new house in Bili refugee camp. He greets me with a wide smile. After nearly two years on the run from violence in the Central African Republic (CAR), he and his family are finally safe.

Jean, his wife, 29-year-old Edwige, and their four surviving children are among the 800 refugees who have settled in Bili camp, near the northern edge of the Democratic Republic of Congo (DRC), since its opening two weeks earlier.

“My house was destroyed when the Sélékas arrived in Bangui,” he says. “I was there. There were many abuses and they set fires. I fled for the first time into the forest with my family, 40 kilometres away. 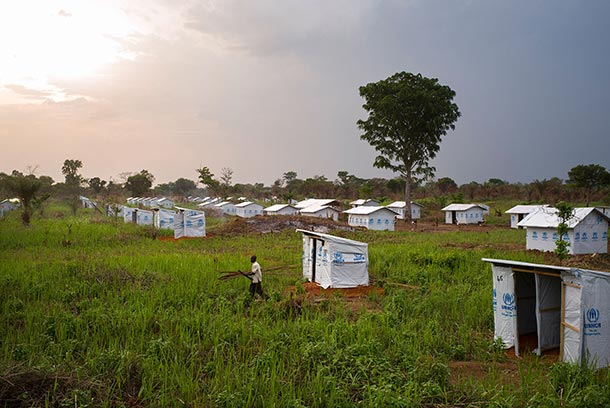 Managed by UNHCR, the newly opened Bili refugee camp in DRC is now home to more than 2,000 refugees from the Central African Republic. UNHCR/Corentin Fohlen

After one month in the forest, they returned to Bangui, where Jean rebuilt their home and prayed for a lasting peace. But a few months later, when anti-balaka fighters staged a counterattack on the city, they had to flee again. It was Christmas Day, 2013.

“The anti-balakas were fighting with the Sélékas,” he recalls. “It was very serious. The Sélékas came to my house. They took me to kill me. I cried. I told them that I was not a rebel. They wounded me with a crossbow. On 25 December, I realized that the problem was catastrophic.”

The attack was so sudden that Edwige left one of their children behind as she ran out of the house. “The fear of the gunshots made her run away and she forgot the child just for a few minutes,” Jean explains. “The Sélékas killed our child. He was two years old. They threw his body away.”

“The Sélékas killed our child. He was two years old. They threw his body away.”

After the Christmas Day attack, more than 10,000 refugees from CAR managed to cross the Oubangui River into DRC – ordinarily a 10-minute voyage by boat. Upon arriving in Zongo, the Congolese city directly opposite Bangui, they were transferred by UNHCR to Mole refugee camp.

Jean’s family had a much harder time escaping. “We were too far from the river and we could not reach it,” he says. Instead, they fled again to the forest, eating leaves and roots for two months as they dodged repeated Séléka attacks. “The children lost a lot of weight,” he says. “We were suffering… We had no help.”

Jean led them to Kouango, his grandfather’s village, but soon it, too, came under attack. “I said: ‘My Lord, where can I go to stay safe with my family?’ ” 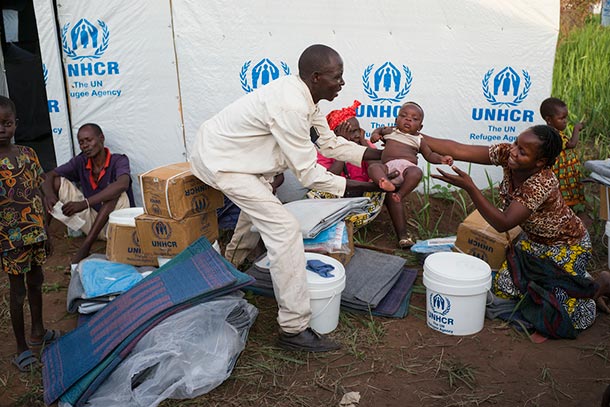 Finally, after months on the run, surviving on little sleep or food, they found a way to cross into Bosobolo territory, in DRC’s Equateur Province, over 400 kilometres upriver from Bangui.

“We took a pirogue,” Jean says, a traditional wooden boat. “But we nearly had an accident because there were many children on board. We called God. We lost a few of our clothes. We finally arrived in Congo on 18 April 2014.”

They spent the next 11 months in Sidi, in an informal settlement close to the border. UNHCR brought them here to Bili, some 50 kilometres from the border, as soon as the new camp opened.

“I am very happy to be here,” Jean says. “The six houses around my house are all my family. My mother stays in one with four grandchildren. My sister is in another one with two children. My brother is in one with one child, and my little brother is waiting for his wife and children, who are still in Bangui.”

More than 90,000 refugees from CAR are now living in the DRC. Some reside in one of the five refugee camps – Mole, Boyabu, Zongo, Bili and Mboti – where UNHCR and its partners are providing emergency assistance. Others live among the host communities. 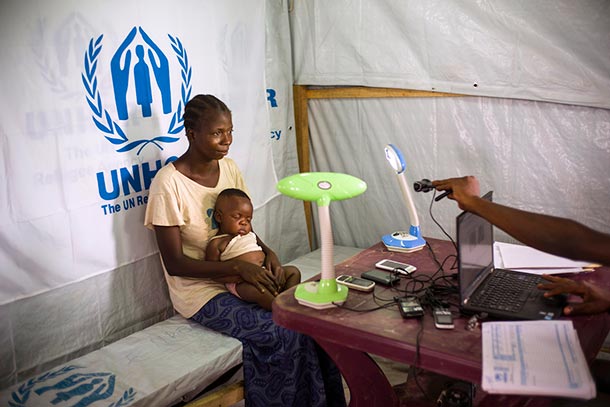 Jean’s wife, Edwige, and the youngest of their four children wait to register at UNHCR’s Bili camp in the DRC. It has taken them nearly two years to escape the violence back home. UNHCR/Corentin Fohlen

Many at Bili camp tell me that they expect the fighting in Central African Republic will continue, causing further instability and displacement in 2015.

But Jean is optimistic. Despite his ordeal, he hopes that one day he will be able to return to his country.

“I hope to return to CAR, because it is my country,” he says, with a hopeful smile. “I am waiting for the right time to go back home. I hear that there is a possibility to go back for the elections.”

Before we part, I thank Jean for his time – and he thanks me in return. “I was wondering when someone would ask me to tell my story,” he says. “I am very happy you did.”

By Céline Schmitt based in Kinshasa, Democratic Republic of the Congo