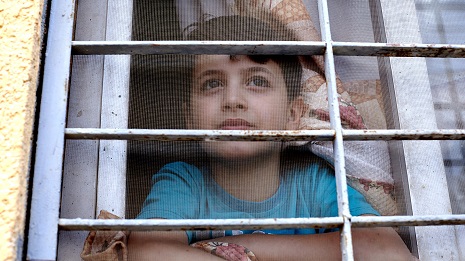 Mahmoud looks out of the window of his family's rented apartment near Cairo. ©UNHCR/S.Baldwin

Mahmoud is just a boy. He loves playing with friends, going to school and reading to his little sister. His mother and father, like any parents, simply want the best for him. But Mahmoud’s story is far from ordinary.

His epic journey began on an autumn day in 2012, when the nine-year-old and his family fled their hometown of Aleppo, Syria. Seeking shelter from a war that has killed thousands, they settled in Egypt, renting a small, sparsely furnished apartment in a sand-swept suburb of Cairo. But daily life was far from easy and, with a change in government in June 2013, it was about to get much harder.

Public opinion soon turned against the 300,000 Syrians seeking refuge in Egypt. Local boys began bullying Mahmoud, at one point even physically attacking him. Afraid for his life and unable to attend school, he refused to leave the apartment, and instead chose to help his father, Mohamed, who was struggling to make ends meet by selling bread to neighbors.

“I wanted to leave because there is no school here and I don’t have friends,” Mahmoud told UNHCR in 2013, his words punctuated with tears. “Here, they hit me all the time.”

Mohamed, too, saw no future for his son in Egypt. Eventually, he took the decision no father should ever have to consider: he put his son on an illegal boat bound for Italy – alone. “No one sends their son out into the world alone unless they live in real fear,” Mohamed explained. “Our lives are too difficult here.”

But escape proved difficult, too. The vessel Mahmoud boarded was fired upon at sea before it left Egyptian waters. The boy spent five traumatic days in a detention center before he was able to see his family again.

Back in Cairo, the bullying resumed. When UNHCR interviewed Mahmoud, he could barely hold back the tears. And with no future, no education and no friends to play with in Egypt, he told them he was not afraid to take the boat again. “I have a dream that one day we will have a new house in a better place,” he said, resolutely. “I will go to school and make new friends.”

All the boy wanted was the chance to live in peace. What happened next would turn his luck around.

UNHCR presented Mahmoud’s case to the Swedish government, which had started accepting Syrian refugees as part of a resettlement program. In December 2013. Three months after Mahmoud boarded the boat, his family was accepted.

They were to live in the municipality of Torsby, a small town in central Sweden with a history of helping vulnerable refugees. Before they left, young Mahmoud was both excited and apprehensive. He wanted to know when he would start school? What their house would be like? Whether he’d have friends, and if his father would find work? At last, he was eager to restart his life.

In January, the family flew to Sweden, touching down at a local airport and continuing on into Torsby by car. “When I first heard I was going to travel, I was so happy,” said Mahmoud, wrapped in a scarf, as the car sped through the freezing, Swedish landscape. “I have traveled twice before in my life, but the last two times we traveled we were escaping. And this time I am going to live a new life.”

Over the next few days, the family received their Swedish identity cards, met local social services and dealt with basic needs, like finding suitable clothing for the freezing temperatures. Mahmoud, his eyes sparkling, took the transition in his stride. Finally, he was able to run outside and play without fear – even partaking in his first snowball fight. Not only that, but for the first time in two years he had the opportunity to learn.

“I was so happy when I saw the school,” he said, smiling, after his first day in class. “And I was happy I made some new friends.” Although he was shy to start, his eagerness to learn shone through and today he is able to introduce himself in simple Swedish.

Although he will never forget his past – in Syria, in Egypt and during his terrifying time at sea –Mahmoud exudes a new sense of confidence when he talks. “Now I just want to live a new life, far from violence, killing and war,” he told UNCHR as springtime approached in Torsby. “If a boy asks me about my life before, I will tell him that it was difficult, but it is better now.”

Donations from supporters like you make these kinds of achievements possible. Consider making a donation today to ensure UNHCR can continue providing life-saving aid to Syrians in need.