Displaced women fear they will be unable to support their families without access to work and education. 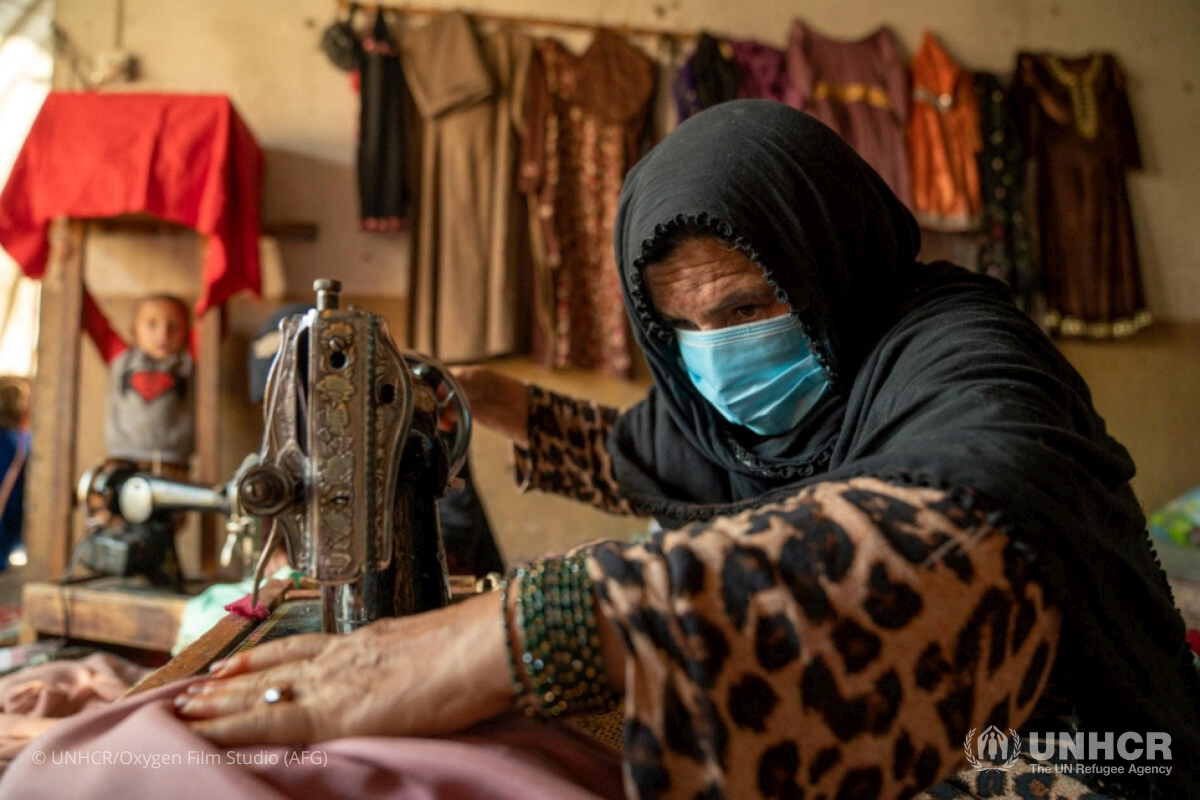 On a recent snowy winter morning, with temperatures hovering at -10° degrees Celsius, a group of worried women have gathered at a community center on the eastern outskirts of Afghanistan’s capital, Kabul.

Many have recently completed a livelihoods training project run by local NGO, Amputee Bicyclists for Rehabilitation and Recreation (AABRAR), a partner of UNHCR, the UN Refugee Agency.

Under the project, 10 women received training last year on tailoring and sewing, although many other women eager to learn new skills also attended the sessions as volunteers. At the end of the training, the women were provided with sewing machines and other equipment, and linked with local businesses and buyers.

It is an important initiative for a community where the landscape is barren and access to services and opportunities are limited. Several hundred displaced families live here as well as around 1,100 families who are “Kuchis”, traditionally pastoral nomads who returned to Afghanistan in 2016 after spending decades in Pakistan because of insecurity at home.

The village is located in one of 80 areas in Afghanistan where internally displaced people and refugees have most often chosen to return. UNHCR and its partners have designated these Priority Areas of Return and Integration (PARRs) and the livelihoods project is one of several community-based initiatives aimed at improving essential services such as education, health and employment in these parts of the country.

“At night, my worry keeps me awake.”

But the future of the project and the women hangs in the balance. Recent decrees issued by Afghanistan’s de facto authorities have placed further restrictions on women’s movements and participation in public life, including an order in late December barring all female employees with national and international non-governmental organizations from going to work. It remains to be seen if the de facto authorities will amend this decree, following widespread criticism. If it stays in place, projects such as this one, which involves female NGO staff training other women, will be unable to continue. 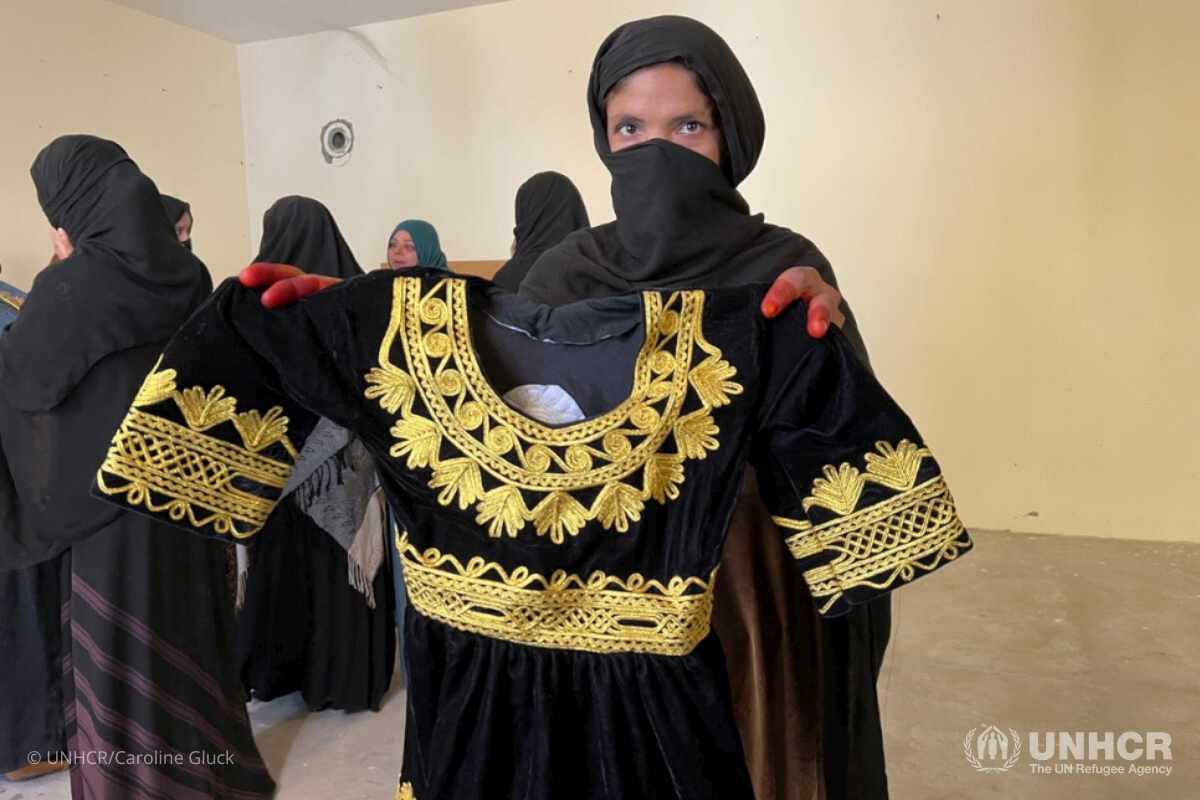 Eighteen-year-old Sanam* who graduated from the training program last year, said she cried when she heard about the latest decree.

“I was so, so sad and disappointed,” she said.  “At night, my worry keeps me awake.”

Sanam is the only member of her family earning an income since her father died. “I was so proud to be able to support my family just like a man. And my family are also very proud of me, that I can support them as a girl,” she said.

Her monthly income has already fallen by two-thirds since the new restrictions were introduced and existing ones tightened. “It’s difficult to go to the bazaar. I can’t go everyday now, and I also need a Mahram (male guardian, who is a family relative) with me.  It means it is harder to buy materials for work and it’s harder to sell my products. Before, I could earn about 7,000 Afghanis a month (US$78), but now I’m only able to earn about 2,000 ($22).”

Another woman, Shakoko, nods in agreement. The 26-year-old mother-of-two is also the main breadwinner in her family after her husband went to Pakistan in search of work. “I came here so I could learn about tailoring, which gives me some income. “The money I earn I use for my medical treatments. If I didn't have any work, what could I do? I wouldn't be able to support my family,” she said.

Zinab, a trainer with the project, described it as a lifeline for local women, many of whom are now breadwinners in their families. A widow who learned to sew from her mother and relies on her income as a trainer to support her children, she said the project provides a safe space for women and has also helped them to develop friendships and grow in confidence.  “Many women in this community are not [formally] educated. They don't have other opportunities to be able to support themselves.

“I’m really afraid about the impact of this for the whole community,” she added. “If you have no job, you have no money and there will be no support for your family. What will be the future for their children?” 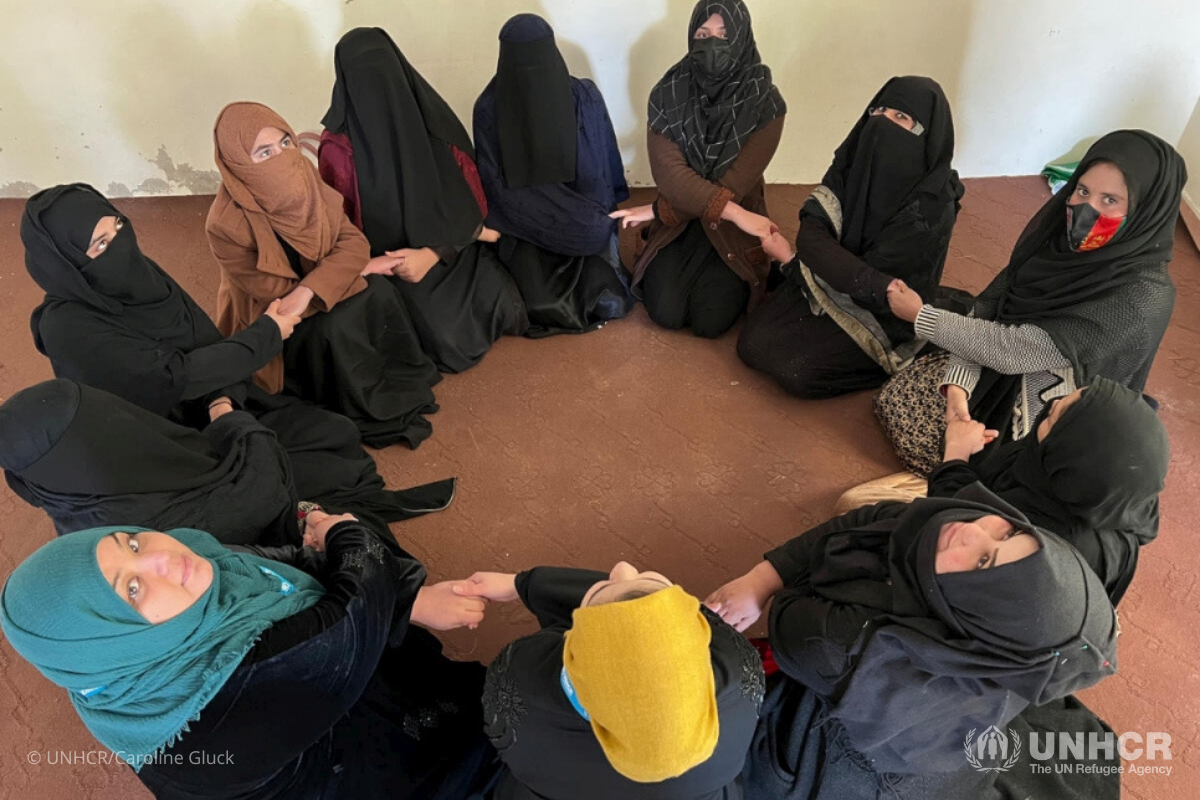 Since the de facto authorities came to power in August 2021, girls have been excluded from attending secondary schools, and a ban on women attending universities was announced in December.

The latest directive preventing women from working for NGOs is expected to have a major impact on the delivery of critical humanitarian aid at a time when half of Afghanistan’s population is facing acute food insecurity and more than 3 million people remain displaced from their homes.

UNHCR has joined other UN agencies and NGOs in calling for the directive to be reversed.

“Preventing women from humanitarian work is a grave denial of their humanity,” said UN High Commissioner for Refugees Filippo Grandi. “It will only result in further suffering and hardship for all Afghans, especially women and children.”

As the women leave the center, an elderly male community leader talks to UNHCR staff, urging them to continue the project, despite the new challenges. “We are very happy with the project. In the future, we hope UNHCR can train not just 10 women, but 100 women here!” he says.