GENEVA, August 31 (UNHCR) – The UN Refugee Agency is seeing an increase in the number of Syrian refugees arriving in eastern Lebanon's Bekaa Valley, with local charities and authorities reporting about 2,200 people settling in the east over the past week – almost double the recent weekly average.

In northern Lebanon, the arrivals rate remains steady at about 400 people arriving every week. UNHCR is adding new telephone hotlines to help the increasing number of refugees seeking to register. The tense security situation in the city of Tripoli last week meant many refugees were unable to make their registration appointments. "The center is now open and operations have returned to normal," UNHCR spokesman Adrian Edwards said. 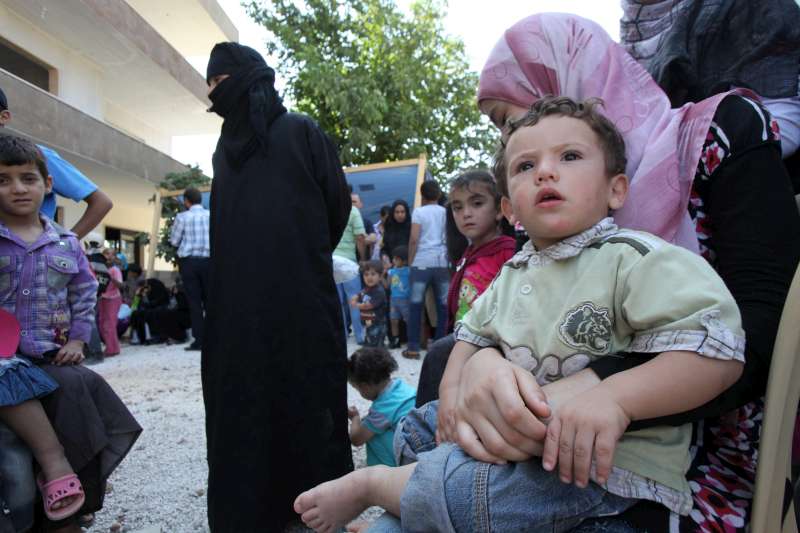 Syrian refugees at a UNHCR registration centre in the village of Jeb Janeen in the Bekaa Valley. © UNHCR/S. Malkawi

According to the Syrian Arab Red Crescent (SARC) 7,200 people are seeking refuge in 45 schools and six dormitories in Aleppo. Many are staying in mosques while others move from village to village to escape the violence. UNHCR staff in Aleppo report a complete breakdown in mobile coverage and internet connectivity.

UNHCR is also monitoring the situation for refugees in the northern border area of Akkar, which is still affected by shelling from the Syrian side of the border. The villages of Al-Nura and Debbabiyeh, which host more than 80 refugees, saw nearby shelling in recent days.

Meanwhile, the squeeze on shelter across Lebanon remains one of UNHCR's biggest concerns, with many refugees still staying in schools that are supposed to open in a week or two for the new school terms. Twenty families were evicted from a school in al-Marj, west Bekaa, earlier this week but were allowed to extend their stay following intervention by UNHCR, its NGO partners and the Ministry of Social Affairs.

"We continue to search for alternative shelter for refugees staying in schools, and are running a hotline for refugees who are coming under pressure to vacate," Edwards said. "So far, we've received 20 reports of refugees being pressured to leave. We are monitoring these cases and asking for understanding by local school authorities to avoid Syrians being evicted," he added.

Last week, UNHCR submitted to the authorities a list of 11 abandoned buildings that the agency proposes to refurbish to house refugees. "So far we have received permission to use three of these and are waiting for further approvals for the renovations. We hope the government can expedite the remaining approvals," Edwards said.

In northern Lebanon, preparations are under way to relocate refugees to an abandoned private school in Tekrit. UNHCR's shelter strategy in Lebanon includes a mix of refurbishing buildings to house Syrians and offering cash for shelter grants for the most vulnerable.

Meanwhile in Turkey, two more refugee camps have been opened in the last week to accommodate new arrivals. Together, the new camps can host 23,000 refugees. Another three camps with capacity to accommodate 10,000 refugees each are due to open in September.

A number of refugees who are currently staying in schools, dormitories and gyms in seven cities in the south of Turkey will be transferred to the new camps. The government is now hosting 80,410 people in 11 camps and schools in border provinces.

A further 8,000 people were reportedly waiting as of Thursday to be admitted through the two border posts. Local authorities have informed UNHCR that the border is not closed and that people are being admitted in smaller groups. Meanwhile, UNHCR is continuing to support the government relief effort by providing tents and other items.

In Syria, UNHCR has received lists from authorities specifying which of the schools accommodating people displaced by the conflict will continue to shelter families once the academic year begins in mid-September, along with alternate public premises for use by people currently sheltering in schools. "Our office in Syria plans to undertake urgent work on buildings that can be used as communal shelters to allow displaced to move out of schools before September 16th," spokesman Edwards said.

On Thursday, UNHCR staff visited eight shelters in rural Damascus and confirmed pressing needs for sanitation, bedding, water and food. UNHCR continues to distribute relief items and financial support to the displaced through the Syrian Arab Red Crescent. Hundreds of mainly Iraqi refugees continue to approach the UNHCR office on a daily basis.

UNHCR's Edwards also said there had been an increase in the number of Syrians fleeing to Kurdistan in Iraq over the past two weeks, with 2,784 people crossing the border. There are now 18,682 Syrian refugees in Iraq.

In a related issue, the Al-Qaem border crossing point is still closed and UNHCR continues to advocate with the Iraqi government to reopen it. The Al-Waleed and Rabia border points remain open. At the same time, Iraqi refugees continue to return to Iraq from Syria – 31,459 Iraqis have returned since the escalation of the Syria conflict.

In Jordan, an average 1,400 Syrians per day have been arriving at the Za'atri camp over the past week, bringing the total number who have been received in the camp to about 23,400. In addition, some 200 Syrians elected to return to Syria on Wednesday after signing voluntary repatriation forms. According to local authorities, some 1,700 Syrians have returned voluntarily over the past six months.

Outside the immediate Syria region, some refugee arrivals have been seen further west in Europe, although numbers are still relatively low. Sweden has the highest reported increase with 2,911 Syrians having sought asylum since January, compared to 640 in all of 2011. Other countries report a small increase in numbers. In France, 255 Syrians applied for asylum between January and July 2012, representing a fraction of the 50,000 asylum applications filed last year.

As of August 29, the total number of Syrian refugees registered or awaiting registration topped 228,976.

Donate to the UN Refugee Agency today to help the exodus of refugees from Syria!