Asylum-Seeking Families Deserve our Protection and Compassion, Not a Closed Door

The dire situation at the U.S.-Mexico border has a human face, like those of Ana*, Rafael and their 3-year-old daughter Julia, who I met at a shelter in Tijuana, Mexico, last month. I traveled to locations along the border to meet with officials from the UN Refugee Agency, its partner organizations and people who have been forced to flee their homes to learn first-hand about the circumstances that tens of thousands are grappling with every day. The story of this young family from Honduras is as common as it is harrowing.

The family fled their neighborhood in Tegucigalpa, the capital city, because gangs demanded money and threatened violence. “We quit our jobs and left all our possessions,” Ana shared, still visibly shaken from the trauma. The family took a bus to Guatemala and then north through Mexico. The goal was to seek asylum in the United States, but due to current restrictions put in place by the U.S. government that block access to an asylum screening, the family was sent back to Mexico. They arrived scared and confused -- their first concern was shelter and safety for Julia. “The first shelter we stayed at [in Tijuana] was ugly and dirty,” said Ana. “We were sleeping on the floor.”

Thankfully now the three are staying in a new shelter where they feel safe and welcomed -- for the few weeks they can remain there. Rafael has found temporary informal work and is saving money so the family can rent a small apartment when their time at the shelter comes to an end. And most importantly, Julia is happy, has made friends and is even taking English classes. But Ana knows this situation is only temporary and ever so fragile and their safety will remain in peril as they are constantly on the move. Their life-threatening fear of returning to Honduras looms large. As the family tries to get by in Tijuana, they desperately await news that they will be permitted to find safety in the U.S. -- to claim asylum. 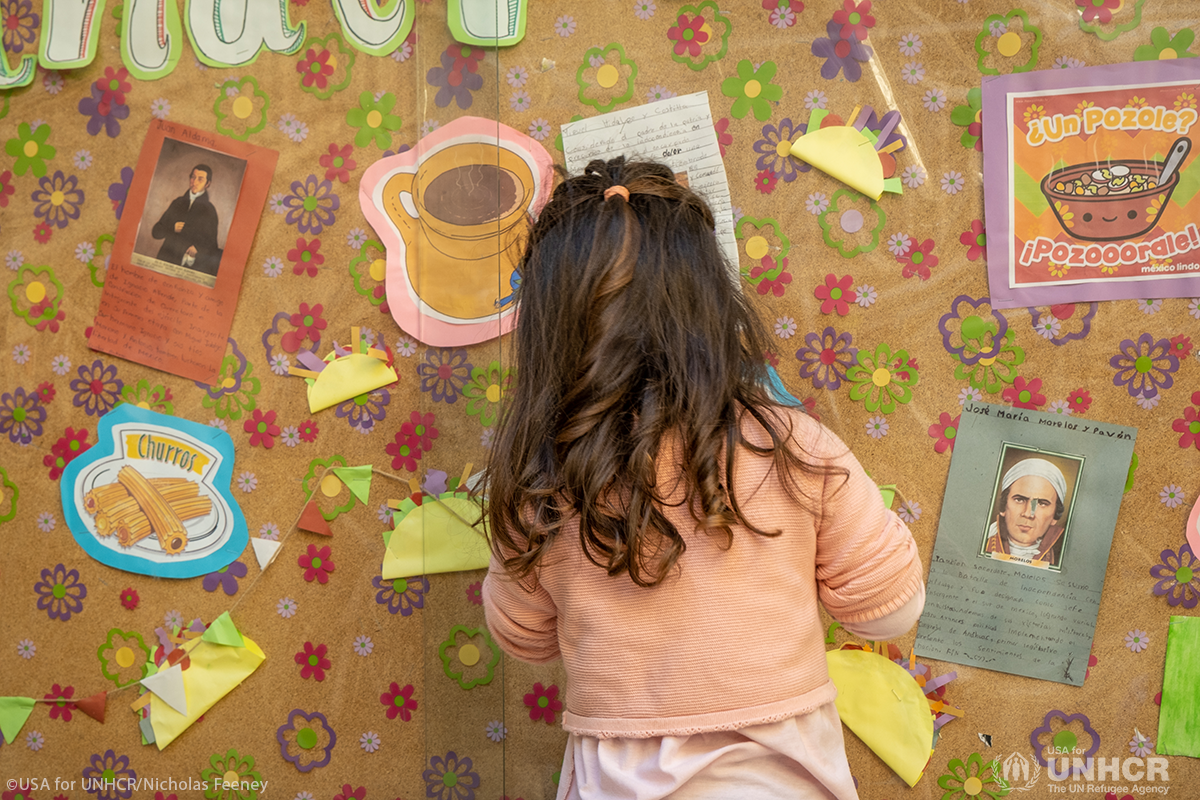 Currently, there are thousands of asylum-seekers temporarily staying along the U.S.-Mexico border, many of them having been forced to flee their homes in Central America and countries such as Mexico, Venezuela, Colombia, Cuba, Haiti and beyond. Worsening violence, extortion and persecution by drug cartels or gangs are the primary reasons families say they were forced to flee. And indeed, I spoke with families who have experienced horrific violence -- women who have been sexually assaulted, young people who have witnessed the murder of a family member.

At the same time, as is often the case when I’ve met with refugees in the most difficult situations around the world, there is reason for hope. At many of the shelters, families have a real chance to regain a sense of normalcy in their lives, albeit for just a few days or weeks. In some cases, children are taking classes or have access to short-term educational programs at the shelters. And I’ve also been inspired by the groundswell of support from U.S.-based non-profits who are helping ensure asylum-seekers are cared for and receive the best legal advice.

Reflecting on all that I observed and experienced throughout my time on the border, I’ve returned with three key imperatives:

The UN Refugee Agency must continue to play a critical role.

Often behind the scenes and working along both sides of the U.S.-Mexico border, the UN Refugee Agency partners with civil society, governments, faith-based organizations, legal service providers and others to better protect asylum-seekers, especially the most vulnerable among them. UNHCR’s response has focused on:

Partner organizations must be fully supported.

As in many humanitarian emergencies around the world, UNHCR works hand-in-glove with local NGOs and service providers along the U.S.-Mexico border.

In Tijuana, I saw the life-changing work happening at Casa Migrante, which provides a safe place for families to recover from their perilous journey. In El Paso, I met with passionate legal service providers from Diocesan Migrant & Refugee Services and Las Americas who are working to protect the rights of asylum-seekers as they make their way to safety. In Ciudad Juarez, I visited Casa Acogida, a shelter and vocational center tirelessly working on behalf of survivors of sexual and gender-based violence while providing a chance for families to regain their independence. And in San Diego, Jewish Family Service and the Survivors of Torture International are providing food, shelter and legal representation to asylum-seekers.

These organizations are among the many I visited. There are thousands of compassionate individuals working long days, under very tough circumstances, and often on shoe-string budgets. I could not be more thankful for their service and partnership.

In conversation after conversation with those who are providing care and services I heard about the detrimental impacts of two current U.S. policies - the Migrant Protection Protocols (MPP), often referred to as the “Remain in Mexico” program, and Title 42, both which were instituted by the previous U.S. administration. Under MPP, individuals who are seeking asylum and arrive to the United States at the border are sent back to Mexico where they are required to wait until their asylum cases are processed, which could take years. Under Title 42, a provision of U.S. health law, people seeking asylum at the U.S. border are turned away and expelled, citing the need to protect the country from further spread of COVID-19. UNHCR maintains that protecting public health and protecting access to asylum are fully compatible, and many countries have put in place public health measures that respect the right to seek asylum since the beginning of the pandemic. Both these policies have the effect of suspending the right to seek asylum that otherwise has been long-guaranteed by the United States.

The Biden Administration has taken steps to end MPP, but at present both of these policies remain. I join with the UN High Commissioner for Refugees in calling for the U.S. government immediately and fully to lift its Title 42 restrictions, as well as express concern about the MPP program and its impact on asylum seekers’ safety and security. With these policies, those forced to flee -- like Ana, Rafael and Julia, along with tens of thousands of others -- will continue to be denied their fundamental rights to seek safety in the U.S.

The humanitarian situation at the U.S.-Mexico border is complex but one thing is simple -- families like Ana and Rafael's who are fleeing violence and persecution deserve our compassion. Read more about their story and get the facts about the U.S. asylum and border policies impacting the situation in our latest explainer.