Badge of Honor: This Asian American and Pacific Islander Heritage Month, Nga Vương-Sandoval celebrates her name, and her journey 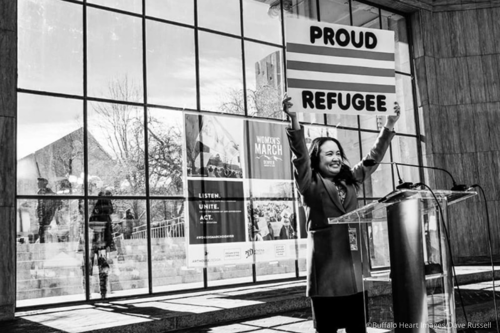 When Nga Vương-Sandoval (pronounced Na Voong San-doe-val) stepped on stage recently to deliver her speech at the Bold Women Change History Summit in Denver, Colorado, she had one mission in mind: To highlight the beauty of demonstrating compassion and encouragement to anyone who has been forced to flee their home due to violence or persecution.

“I wanted to bring my lived experience to advance services and awareness for future newcomers,” she said. “But most important, I wanted to show that being a refugee isn’t a badge of shame; it’s a badge of honor.”

By the end of her speech, many were wiping their eyes as she received an extended ovation.

“I wanted to show that being a refugee isn’t a badge of shame; it’s a badge of honor.”

When she was three years old, Nga fled Việt Nam with her family. It was April 30th, 1975, the day Sài Gòn fell to the North Vietnamese army. Nga said she was too young to grasp the gravity of that moment, but she vividly remembers what she witnessed.

“Thundering sounds of heavy artillery echoed in our neighborhood. The ear-splitting sound of machine guns ricocheted in our streets. Sounds of women and children screaming pierced through our ears,” Nga recalled. “We had to leave because we were forced to, because we had no other option.”

Nga and her family were among the tens of thousands of Vietnamese who fled Việt Nam in the closing days of the war. Their flight for safety prompted US President Gerald Ford to sign the Indochina Migration and Refugee Act of 1975, which granted refugees special status to enter the United States and established an ad hoc resettlement program through voluntary agencies and private sponsorships.

Ford’s successor, President Jimmy Carter, then signed into law the landmark Refugee Act of 1980, which established the contemporary US refugee resettlement program and asylum system; aligned the US definition of “refugee” with the internationally recognized definition; mandated the establishment of annual refugee admissions ceiling; and required annual consultations between Congress and the US President.

A new start in the USA 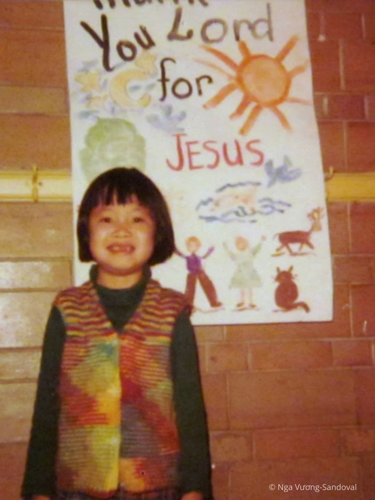 The legislation in 1975 paved the way for Nga and her family to build a new life in the United States. After living in two refugee camps in the Philippines and Guam, they arrived in the midwestern state of Arkansas, then later moved to Colorado, where Nga started primary school. She had a welcoming first grade teacher and studied hard. Nga’s proudest moment came when she received the “Student of the Month” award.

But Nga soon faced a challenge that she couldn’t resolve. Her name, Nga Vương, which means royal swan in Vietnamese, proved difficult for American English speakers to pronounce. And when her new teachers didn’t know how to correctly say her name, they opted not to call on Nga at all during class.

“[I] wasn’t called on, just because they couldn’t pronounce my name.”

“It was detrimental for me, as a very studious student, and [I] wasn’t called on, just because they couldn’t pronounce my name,” Nga said. “It happened all throughout grade school. The teachers didn’t have the humility to ask and I didn’t have the confidence to correct them because I was a child.”

As an adult, she runs into the same issue. A former colleague who couldn’t pronounce her name asked Nga to change to an “easier” English name. Nga said she has heard similar stories from refugees and immigrants of all ethnicities, who have had to abbreviate their names, or switch to an American-sounding name.

“For a split second, when I hear people do that, my heart drops a little bit.” Nga said. “I feel that there’s so much that we’ve given up already. we’ve lost so much, and it’s like to lose one more thing is so heartbreaking to me.”

The history of AAPI Heritage Month

On May 7, 1843, the first Japanese immigrant arrived in the United States. On May 10, 1869, the “Golden Spike” was driven into the ground in the state of Utah, completing the first transcontinental railroad. Chinese accounted for almost the entire workforce on the historic railroad, but received no recognition.

More than a holiday or a month 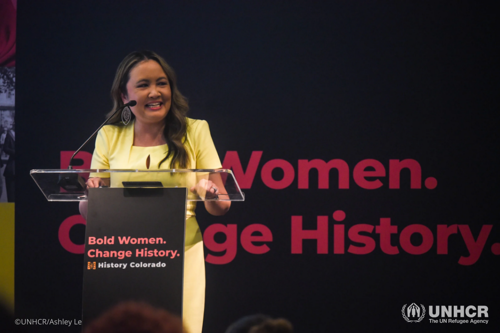 As more people are forced to flee war and persecution, Nga hopes that Americans will go beyond simply understanding different cultures, and truly welcome them into their daily lives, a concept she refers to as “cultural embracing.”

Nga works as US Refugee Advisory Board project manager at the Refugee Congress and an Immigration & Diversity, Equity, and Inclusion Advisor at 3i Law Firm. In the little spare time she has, she serves on various boards and advisory committees that work on immigrant and refugee issues and maintains a packed speaking schedule.

“Everyone in the world has been impacted by displacement.”

“I strongly believe in storytelling… I believe that’s the most important mechanism in order for people to shift their mindset, shift that old-fashioned, antiquated paradigm of thinking that ‘that’s not my problem. It’s an overseas problem. They don’t look like me,'” she said.

“Guess what? Everyone in the world has been impacted by displacement… What do we have left if we don’t have our core values of seeing the importance of and the value in other people, especially when they’re in need of it the most?”

UNHCR, the UN Refugee Agency, serves as the ‘guardian’ of the 1951 Convention Relating to the Status of Refugees and its 1967 Protocol. States are expected to cooperate with the organization in ensuring that the rights of refugees are respected and protected. 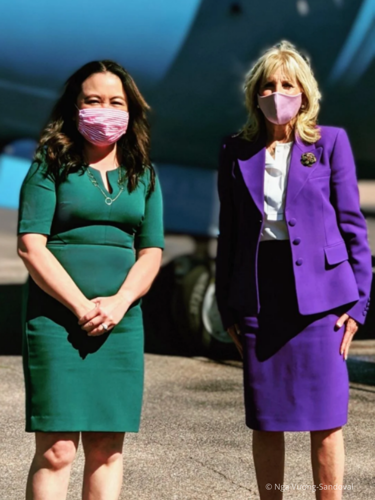 When Nga received an email from the White House in May 2021, she thought it was spam. She vetted the email, relying on her background in homeland security.

“Within 24 hours, I was standing in front of Air Force Two with First Lady Dr. [Jill] Biden with a very clear mission in mind to relay my message of raising the presidential determination,” she said, referring to the number of refugees the president authorizes to enter the country each year.

She recalled telling the First Lady that the president’s recent presidential determination of 62,500 was a start, but that it had to be higher because every single number represented a life.

“I believe it’s the power of refugees.”

In October 2021, President Biden announced that the United States would raise the refugee admissions cap to 125,000 for fiscal year 2022.

“I believe it was a collective effort [that included] the silent heroes who you never see on the forefront and those who don’t want to be in the limelight or people who advocate in their own quiet ways,” she said. “I believe it’s the power of refugees.” 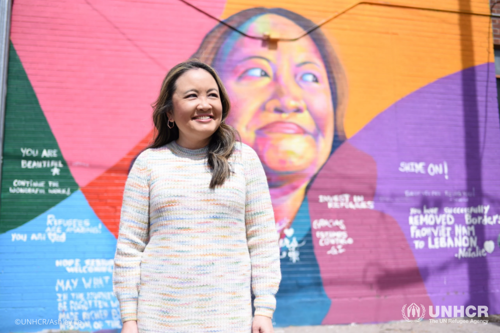 The story of Nga’s refugee journey and activism has reached many people, including Denver-based artist Thomas Evans. In late 2020, Thomas began painting a mural of Nga in Denver’s Five Points neighborhood.

“Using street art as a platform is important for me to tell a story of who’s putting in the work, what does the community look like,” Thomas told those gathered to watch the mural unveiling. “I looked up Nga… we got to talking, and I was like, ‘I definitely have to paint you.’ So for me it was like I have to tell that story in a unique way.”

“You have successfully removed borders.”

The colorful mural is filled with messages from visitors.

“Invest in refugees,” one message said.

“You have successfully removed borders. From Việt Nam to Lebanon,” read another message signed by a visitor named Natalie.

In January 2021, President Joe Biden signed the Memorandum Condemning and Combating Racism, Xenophobia and Intolerance Against Asian Americans and Pacific Islanders in the United States. It declared, “the Federal Government must recognize that it has played a role in furthering these xenophobic sentiments.”

Seeing herself in others forced to flee 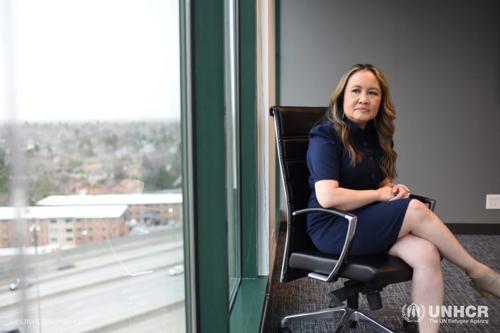 From Syria to Afghanistan, from the U.S.–Mexico border to Ukraine, the humanitarian crises of the last decade have instilled in Nga a sense of urgency as each event serves as a reminder of the painful journey her family once took.

“We don’t come from the same continent. We don’t speak the same language. But I understand what you’re going through and I want you to know that I’m going to fight to have you and your family reunited and that you’re going to reach safety the way that my family and I have.’ ”

“Anti-racism means actively identifying and opposing racism and racial discrimination. Today, and everyday, I call on all of us to raise our voices against policies, practices, and behaviors which exclude.” –Filippo Grandi, UN High Commissioner for Refugees