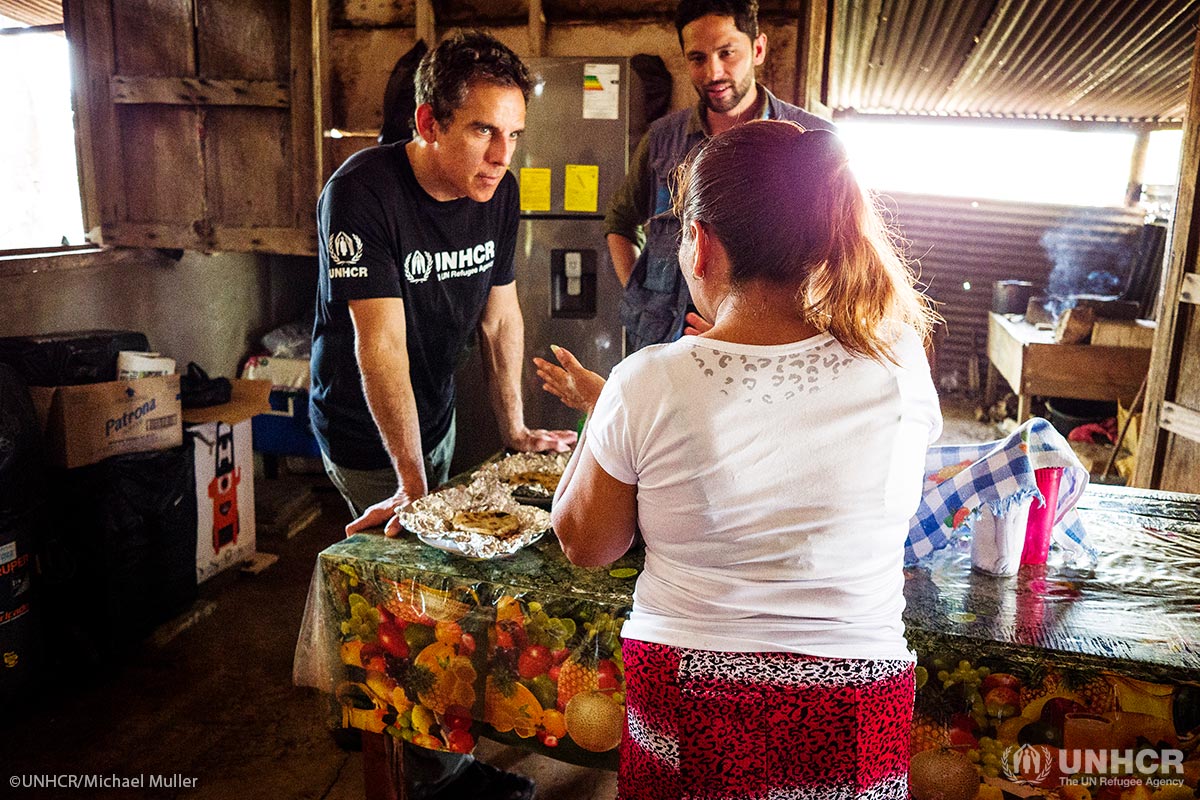 Meeting refugees in Guatemala this week, UNHCR Goodwill Ambassador Ben Stiller calls for action and solidarity with refugees around the world.

The announcement comes today as Stiller concludes a trip with UNHCR to Guatemala, where he met some of the men, women and children from the North of Central America who have been forced to flee their homes because of violence. In recent years a growing number of people across El Salvador, Guatemala and Honduras have fled extraordinary, unchecked violence at the hands of organized criminal groups and gangs – including murder, rape, abduction and even the forcible recruitment of children into gangs. Stiller spent time in Guatemala meeting refugees including unaccompanied children and seeing how UNHCR, with the government and its partners, is working to support and protect them.

Commenting today on his new role as Goodwill Ambassador, Stiller said, “I am enormously honored and proud to take on this role as Goodwill Ambassador for UNHCR, the UN Refugee Agency. UNHCR is an organization that is working tirelessly all over the world helping men, women and children fleeing war, terror and persecution. Here in Guatemala, the families, including children, that I met experienced fear and violence back home that is beyond imagination. They are vulnerable and have suffered immensely. They need help. UNHCR is on the ground here with its partners providing them with support, protection and shelter.

Stiller continued, “With over 68 million displaced people around the world today, there has never been a more compelling reason or greater urgency to show solidarity and support for refugees. I for one will do what I can as a Goodwill Ambassador for UNHCR, to advocate for refugees and encourage others to join me.”

Filippo Grandi, the United Nations High Commissioner for Refugees, said, “Ben will be a great Goodwill Ambassador. I have witnessed personally his commitment to the world’s refugees and his extraordinary capacity to talk about the complicated issue of displacement in a manner that is clear, passionate and convincing. And this is precisely the role of Goodwill Ambassadors: to raise awareness, generate support and give a voice to those who have been forced to leave their homes. I am looking forward to working with him.”

UNHCR works with governments and partners on the ground in locations all over the world to support and protect refugees and help them build better futures. In Guatemala, UNHCR is working with the government and civil society partners as part of a comprehensive regional response. Through this regional response framework, known locally by its Spanish acronym, MIRPS, six governments in the region have agreed to work together to address the full scope of forced displacement, from its root causes, strengthening asylum and protection systems and working on durable solutions. This initiative is a concrete example of regional cooperation to address difficult situations of forced displacement, which has directly informed the development of the Global Compact for Refugees, to be adopted at the end of the year.

Ben Stiller has been supporting UNHCR since early 2016, meeting with refugees in Germany and Jordan. Best known for his role in films like Dodgeball, Zoolander and Meet the Parents, Stiller has played a key role in UNHCR projects including the #withrefugees campaign.

Most recently, on 20 June 2018 to mark World Refugee Day, he appeared in a special edition Buzzfeed Tasty film entitled “Homemade Chicken Shawarma, As Made By Ben Stiller and Ahmed Badr”. In the film Stiller joins writer and former Iraqi refugee Ahmed Badr to make an at home version of chicken shawarma, a traditional dish from Ahmed’s homeland Iraq, bringing back memories of his childhood in Baghdad before he was forced to flee.