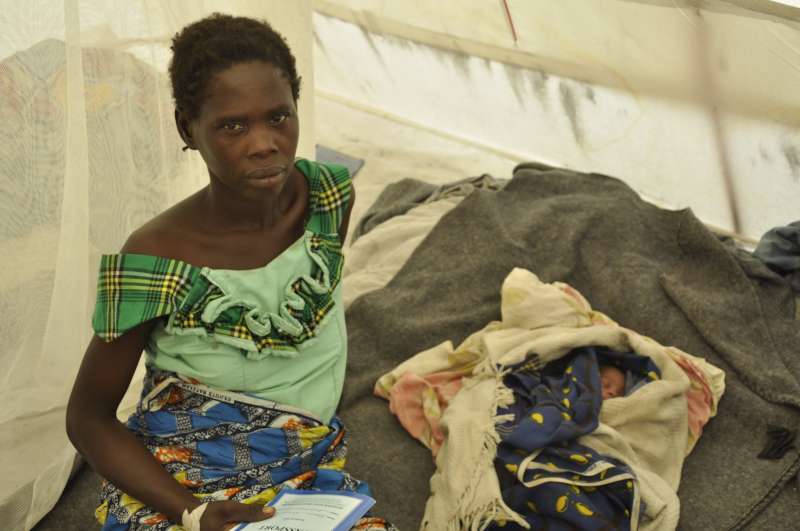 Congolese refugee Monica with her newborn child Andrea. The baby was the first to be born at Bubukwanga Transit Center in western Uganda. © UNHCR/L.Beck

Andrea joins a nursery of baby chickens and goats in this new transit center in the foothills of western Uganda, some 15 miles from Democratic Republic of the Congo (DRC). His birth was the first registered at the transit center since it opened last Sunday. He is now one of seven babies born here as refugees.

It's not an auspicious start for a boy whose mother, Monica, has lived most of her life in a region blighted by conflict, violence and lawlessness. She fled her home in Kamango, a town in North Kivu province, after it was attacked last Thursday by a Ugandan rebel group called the Allied Democratic Forces.

The attackers, using a megaphone, told everyone to leave the town and then killed the community leader. Fearing for her safety and that of her unborn child, Monica told UNHCR that she decided to make for the Ugandan border.

"As girls were leaving their houses, they were being grabbed and taken into the forest," she recalled. Monica was so far along in her pregnancy that she had to be carried by neighbors to the border – getting separated from her husband, son and grandson along the way and reaching Bubukwanga alone.

When Monica's waters broke on Tuesday, just five days after she had fled her home in the DRC, she sought help at the local district health center, but they had no drugs. Luckily she was found by visiting UNHCR medical staff working in a team with other partners, including Médecins Sans Frontières (France).

She became one of the first recipients of the medical services available at the health center, adjacent to the new transit center, where she gave birth to Andrea on Tuesday night. "When they [UNHCR] found me they gave me a lot of drugs and I was so grateful," she said.

Stephen Mwaura, UNHCR's health and nutrition coordinator for south-west Uganda, said providing maternity care could be a real challenge in an emergency situation like this, especially for those on their way to safety. "At least here in the transit center we are able to provide comprehensive care, but our main challenge at the moment is a lack of beds for arriving mothers and we are looking for ways to get at least an additional 10," said the doctor, who had found Monica in the district health facility.

The health facility at the transit center provides around-the-clock medical assistance to the more than 15,500 refugees currently living in Bubukwanga as well as needy members of the local community.

Services include an in-patient department, maternity ward, nutritional screening for malnourished children and ante-natal care for mothers such as Monica. Around 250 patients are currently being seen at the health center but this number is expected to rise as more people arrive in Bubukwanga.

UNHCR and its medical partners are also running a mass vaccination campaign in the transit center for children up to the age of 15 years. Here they are immunized against measles, de-wormed and given Vitamin A supplements. Many of these children have never received medical care of any sort.

Monica is already back on her feet – she has no time to sit around – but the infection she developed when her waters broke means that she has trouble walking far and needs to rest regularly. Doctors at the healthcenter are closely monitoring her and providing her with the necessary medication.

She has also been housed in one of 229 family tents in the transit center and is being assisted in collecting her meals from the communal kitchen and given extra blankets for her and her baby.

Monica's main hope is that Andrea grows up healthy and gets an education – where that will be, she doesn't know. But she can't imagine herself and her son going back to the DRC. On Thursday, she was finally reunited with her husband, who was delighted to see his wife alive and to meet his son for the first time. For UNHCR staff, Andrea is a joyful addition to camp life and a symbol of hope.