Refugees from Central African Republic attacked as they flee to Cameroon 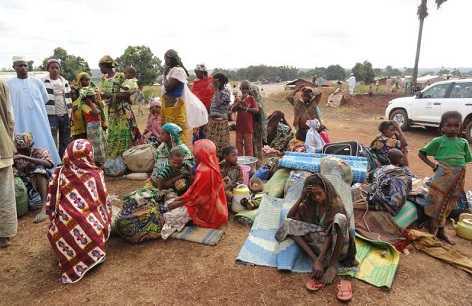 CAR refugees who have arrived at the Gbiti transit center in Cameroon. Some 10,000 refugees a week are now streaming over the border from Central African Republic.© UNHCR/M.Poletto

GENEVA, April 11 (UNHCR) – The UN Refugee Agency said on Friday it was extremely concerned by reports that anti-Balaka militiamen were blocking and attacking civilians trying to flee violence in the Central African Republic.

"Over the past two weeks, our colleagues in Cameroon have been seeing refugees arrive with wounds from machetes or gunshots," UNHCR spokesperson Melissa Fleming told a news briefing.

She said UNHCR staff had also seen increasing numbers of people crossing into Cameroon via remote border entry points in an effort to evade the anti-Balaka militias. All are arriving in a terrible physical condition.

"New arrivals told our colleagues that anti-Balaka militias have blocked main roads to Cameroon, forcing them to wade through the bush for two to three months before reaching the border," she said. "The refugees also said that the anti-Balaka attacked them during their flight."

UNHCR staff in recent days have registered and treated a woman, a boy and a man with serious machete wounds, plus another man with a gunshot wound in the chest.

The majority of new arrivals – all Muslims, the main target of the anti-Balaka militias -- are women, children and elderly people, Fleming said. They told UNHCR staff the men stayed in CAR to create self-defense groups to protect their community and their cattle.

"UNHCR is calling on the anti-Balaka to stop preventing civilians from fleeing to neighboring countries for safety," Fleming told reporters. "We are also calling on all sides to the conflict to renounce violence."

Muslims have been the main target of the anti-Balaka militias but targeting of populations based on their religion by rival militias has affected both Christian and Muslim communities.

Despite the obstacles to their escape, an average of 10,000 people a week now cross from CAR into eastern Cameroon. With the main entry points at Garoua Boulai and Kenzou inaccessible because of anti-Balaka activities, people are using alternatives. This has increased the number of entry points into Cameroon from 12 to 27 over last three weeks, making it more difficult for UNHCR to monitor the border.

Most new arrivals are coming from the area of Boda, near the Democratic Republic of Congo, and Bozoum, near Chad. Because of the long detour, all the refugees are arriving in a terrible state, some with swollen feet or legs and others suffering from malnutrition.

Working with its partners, the UN Refugee Agency has increased the number of mobile clinics at entry points to provide emergency care as refugees arrive. It is also supporting public health centers overwhelmed by the number of refugees and their condition.

Meanwhile, UNHCR has relocated some 20,000 refugees who had been living in the open in the Garoua Bouai and Kenzou border areas. They are now settled in sites set up at Lolo, Mborguene, Gado and Borgop in the East and Adamwa regions.

So far this year, Cameroon has received 69,389 refugees from CAR. This is on top of 92,000 who had fled in earlier waves since 2004 to escape rebel groups and bandits in the north of their country.