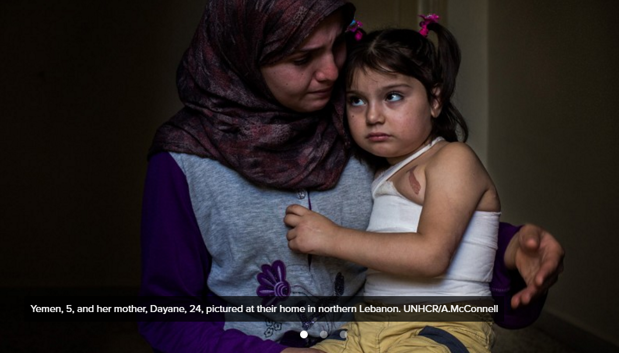 A staggering number of refugees bear wounds from the Syrian conflict. These 12 survivors in Lebanon are learning to be whole again.

The three-year war in Syria has claimed the lives of more than 190,000 people. Over half a million more, by most estimates, have been wounded in the conflict.

In Lebanon, one in 30 Syrian refugees have suffered conflict-related injuries. The scale of this brutality has driven huge demand for prosthetic limbs – demand that far outstrips supply.

Thousands of refugees are now struggling to lead normal lives despite grave handicaps, ranging from lost limbs to blindness, burns and paralysis. UNHCR is working with partners such as the World Rehabilitation Fund to help those most in need. But the scale of the problem means much more needs to be done.

When photographer Andrew McConnell and I visited the 12 survivors profiled here, we were struck by the severity of their loss as well as the depth of their honesty and grace.

Eleven months ago, Nawaf was sitting in his room in Hama, Syria, when a bomb hit the house, severely burning the right side of his body. Nawaf’s uncle rushed him to the nearby field hospital, where his right arm was amputated above the elbow.

When his father came one week later, he was shocked to see what the war had done to his only son: “He was a very happy kid,” says Abou Nawaf. “He used to work the lands with me, go to school. He had such a fun happy spirit. But after his injury he changed completely.”

With help from the World Rehabilitation Fund, a UNHCR partner, Nawaf is learning a range of movements using the prosthetic arm and is slowly becoming more self-reliant.

Hussein was playing with his siblings and cousins in the living room of his home when a bomb struck the building. Everyone inside was presumed dead and their bodies were carried to the hospital morgue. 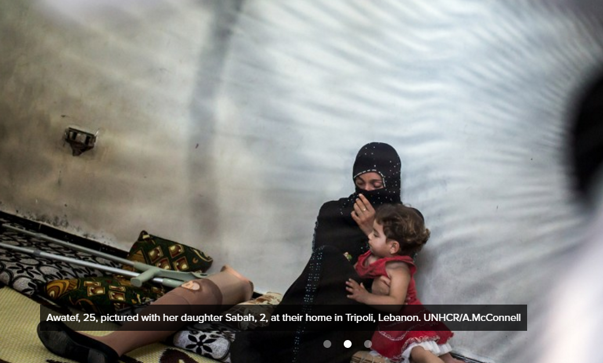 The next day, as the small bodies were being prepared for burial, someone noticed that Hussein was still alive – unconscious, and shaking from the cold. He was rushed back to hospital, where doctors had no choice but to amputate both legs above the knee.

With the help of World Rehabilitation Fund, Hussein now has two new prosthetic limbs and is learning to walk again.

Hasna was traveling with her husband and two children on a motorcycle in Qusayr in March 2012 when a bomb fell nearby. “My daughter was sleeping in my arms,” Hasna recalls. “She never woke up.”

Her husband was still alive as they were being transported to a field hospital. “My husband was holding my hand the entire time, up until we were driven to the town of Lousseh” she says. “It was there they informed me that my husband had breathed his last breath.”

Despite four surgeries in Lebanon, she ultimately lost both legs. Handicap International, an NGO working in the region, supplied her with prosthetics. “It was hard and difficult, but now I always try to focus on the positive things,” Hasna says. “I don’t want to be sad and angry, I don’t want the negative feelings to take control of me.”

On a cool night in April 2013, shelling and shooting started in the town of Awar in Homs, Syria. One of the bullets hit Ali, a father and a husband in his fifties. After piercing his left shoulder, it struck four of his vertebrae and his lungs before exiting near the right side of his waist.

Now Ali is paralyzed from the waist down. His lack of movement has resulted in bedsores that get worse with time. UNHCR is seeking partners who can provide him with additional care.

In January 2011, Fatima was traveling with her father and brother to Homs when a bomb fell on the road. The next thing she remembers was waking up in the hospital, overwhelmed with shock and tears. “I couldn’t see anything,” she said. “My right leg was not there. There was nothing there.”

After being fitted with two prosthetics that did not fit properly, and suffering from depression, Fatima was fitted with a new prosthetic by UNHCR’s partner, the World Rehabilitation Fund. “I feel good now. I can even climb trees!” she exclaimed. 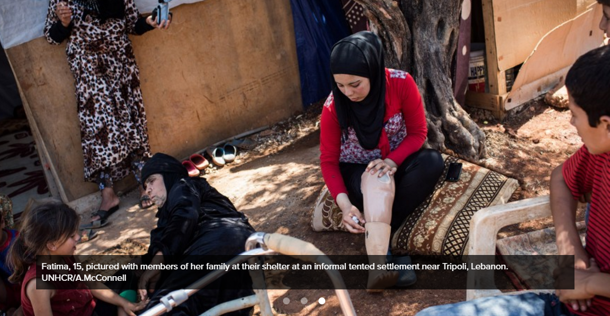 Ahmad lost both legs after a mortar attack near his home in Zabadane, Syria. Both he and his wife now volunteer with UNHCR, providing information to other refugees in the Tripoli area of Lebanon.

On a cold night in November 2013, as bombs fell around her home, Yemen ran to the kitchen in terror. In her panic, she ran straight into the stove, spilling a pot of boiling water down her front. With most of her body burned, her mother rushed her to a nearby field hospital, then carried her to safety in Lebanon six days later.

“She is very traumatized. She is afraid of everybody and is always crying from pain,” says her mother, hugging Yemen to her chest. “She still has a long way to go. She needs plastic surgery to graft skin from her body.”

While others were celebrating the New Year on 1 January 2013, Ihsan, a 22-year-old dental student, was getting his leg amputated. Injured three days earlier by a bomb that fell on his hometown in Damascus, Ihsan underwent two separate surgeries.

“The last thing I remember was seeing fire then feeling an immense sharp of pain before passing out. I woke up the next day in the hospital,” he recalls, “They kept trying to save my leg. But after three days they had no choice but to cut it off.”

Undaunted, Ihsan continued to volunteer for the Syrian Arab Red Crescent, even after his injury. Where once he ventured out in rural Damascus province to provide information and support for the injured, now he stayed home, to help administer the way help was being delivered. Today he is a refugee in Lebanon, he is serving as a refugee outreach volunteer with UNHCR.

Six months ago, Awatef was giving her young children a bath outside her house in Homs when she heard shelling. She grabbed her children and ran inside. “The second I put my first leg inside the house I couldn’t feel the other one as I fell to the ground,” recalls the 25-year-old. “My mother in law took my children and held my leg. The only thing keeping it in place was the skin.”

In Lebanon UNHCR’s partner, the World Rehabilitation Fund, fitted Awatef with a prosthetic limb and she walked for the first time in six months. “It was very hard to walk with the prosthetic leg, but I was so happy. Now I keep practicing so it is getting easier.”

Sabah, 57, has diabetes and had been unable to find insulin for the past two years anywhere near her home in Homs, Syria. “We couldn’t find the medication anymore. Even if we did there was no way to reach it.”

Around the same time the insulin stopped, Sabah was at home with her family when their neighbour’s house was bombed, shattering her windows. A piece of glass cut her foot and she was rushed to the field hospital where the glass was removed and the wound cleaned, but without insulin her injury did not heal. The wound became infected and her son brought her to a hospital in Lebanon where doctors amputated her toes. “I haven’t walked in two years and when you’re 57, two years feels like an eternity,” says Sabah.

Reem lost her leg, her home, her husband and her daughter all in the same second in October of 2012 when a shell hit their house in Hama. A month and half after the tragedy, the now mother-of-two brought her children to the Bekaa Valley in Lebanon where her parents had fled before her. “I came to Lebanon because I had no one left in Syria,” says Reem. “My parents and siblings were here and after my husband died I had no one there.”

Mohammed was severely burned by shelling two years ago near his home in Homs. Irsaa was outside when the shell hit her house. She ran inside to find Mohammad with burns to most of his upper body. She rushed him to hospital where he spent two days receiving treatment. Mohammed returned to the hospital for more than a year to get his wounds cleaned and bandages changed. Irsaa says, “He used to look down at this body and start to cry and scream.”

The boy needs a series of operations and skin grafts to his arms and neck, Syrian doctors told his mother. “Maybe if he looks more normal he can learn how to become a kid once more,” adds Irsaa.