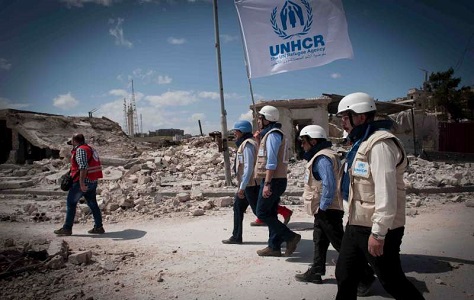 Amid the destruction of war, the UNHCR flag is carried forward during a ceasefire in Aleppo that allowed the delivery of desperately needed humanitarian aid.© UNHCR/B.Diab

ALEPPO, Syria April 9, 2014 – The UN refugee agency and the Syrian Arab Red Crescent (SARC), with agreement from the government and opposition forces, have delivered the first humanitarian aid into a besieged area of Aleppo, Syria since last June.

The ceasefire, agreed for the duration of the operation, was fully respected as two truck-loads of supplies were moved by hand into the Boustan al Qaser neighbourhood of eastern Aleppo.

The food, medicine, blankets, plastic sheeting, hygiene kits and kitchen sets were unloaded at the last checkpoint on the outskirts of the city. The aid -- moved the final 1.5 km to a SARC warehouse using 54 pull-carts and 75 workers in 270 separate trips -- will now be distributed to the population.

UNHCR staff had seen the dire humanitarian situation inside eastern Aleppo, reporting acute shortages of food, water and basic supplies. No humanitarian aid has reached the population since UNHCR last accessed the area in June 2013.

It is estimated that some 6.5 million of Syria's 22 million people have been displaced inside the country, while another 2.6 million are now refugees, mainly in neighboring countries. The humanitarian situation continues to deteriorate.

Donations from supporters like you make these kinds of achievements possible. Consider making a donation today to ensure UNHCR can continue providing life-saving aid to Syrians in need.