Congolese orphan starts a new life in US after surviving abuse 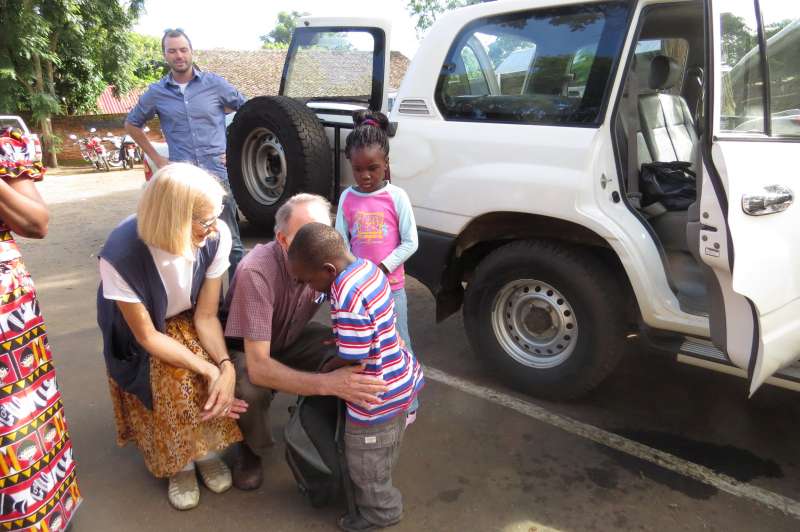 Medical staff say goodbye to Faustin as he leaves for the airport in Lilongwe and a new life in the United States. © UNHCR/A.Tilahun

LILONGWE, Malawi, March 19 (UNHCR) – The news on the radio was very bad. A young refugee boy had been abandoned in front of a hospital in the Malawi capital, Lilongwe, bearing multiple scars and suffering from a gangrenous leg, which doctors had to amputate to save the child's life.

UNHCR staff members, who had listened to that disturbing report last July, soon visited Faustin in Nkhoma Hospital, where the confused youngster asked who would take him home and become his new mother. One thing was clear; he did not want to return to the home of his uncle, the guardian who brought him to Malawi from the Democratic Republic of the Congo after Faustin's parents were killed there in 2011.

Almost a year on, seven-year-old Faustin is a different child, in a different country. Although the animated young boy rarely shows signs of the trauma and loss he has suffered, the physical scars and his awkward gait are a constant reminder. But he now has something good in his life – a new home in a safe environment, a decent education and the love of the new mother he called out for in hospital.

The United States agreed to resettle the boy under its Unaccompanied Refugee Minor Programme after his name was forwarded by UNHCR, following consultations with a wide range of partners, including Nkhoma Hospital, local partners and the Malawian government. He flew to his new home and family earlier this year.

The programme places orphans and unaccompanied refugee children with foster families across the United States, who provide love and support until the child legally becomes an adult. Faustin also gets access to the rights that US citizens enjoy, including the health care that will be necessary as he grows and needs adjustments to his prosthetic leg and treatment for any lingering health problems.

He should also be free from the fear that marked his life in the care of his jailed uncle, who admitted to UNHCR interviewers that he and his wife had abused the child. After they arrived in Malawi in 2011 from the volatile DRC province of North Kivu, the couple prevented Faustin from attending school, denied him food, made him perform hefty household chores and regularly beat him.

When Faustin attempted to run away, neighbours caught the youngster and returned him to his relatives who tied him up with metal wire and beat him. "My leg was on fire. The wire was so hot," Faustin told UNHCR about the gangrene in his leg. After this final abuse, his aunt left him outside the hospital and fled for Mozambique.

Until his departure, Faustin was kept in protective custody at Nkhoma Hospital, where the staff grew very fond of him and made every effort to make him feel as comfortable and safe as possible. The staff even hired a tutor to help Faustin study English in preparation for his move to the United States.

Meanwhile, 500 Miles, a Scottish charity working in Malawi, volunteered to fit the boy with a prosthetic leg, free of charge. While his first days were unsteady, Faustin improved significantly and by last November he was walking more confidently.

As the day of his departure grew closer, he became more and more excited. "In America, will there be toys?" he asked en route to the airport. Minutes earlier, the entire hospital team and several staff from the other agencies involved in his case lined up in front of the hospital to say goodbye to Faustin.

The medical director at Nkhoma Hospital, an American, told Faustin he would see him at his high school graduation as they hugged goodbye and the UNHCR team accompanied him to the airport, where he flew to his foster family and new life . . . and plenty of toys.

Malawi hosts some 17,000 refugees and asylum-seekers, mainly from Democratic Republic of the Congo and Eastern Africa.

By Chris Murphy in Lilongwe, Malawi