Congolese refugee in Kenya shows he is not helpless 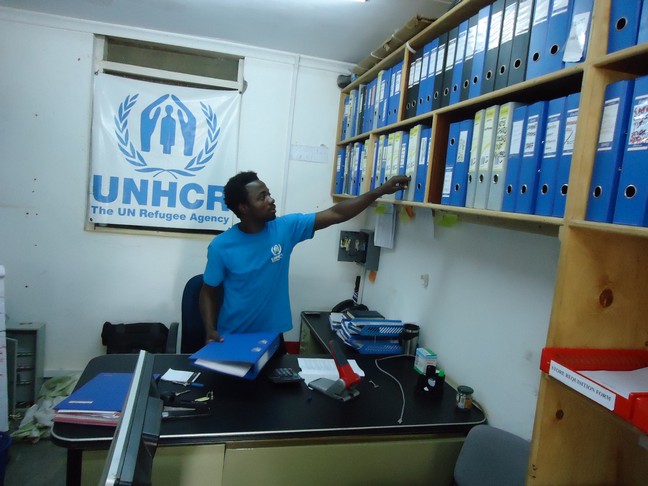 Amani Kishonge Ruhimbana in the office he uses as compound management assistant, one of the jobs he has undertaken as he seeks to improve his life. © UNHCR/D.Mwancha

"There is often a bad image created out there about refugee camps," said the refugee in his mid-20s who fled conflict in the Democratic Republic of Congo in 2007. "The usual general view by many outsiders is perhaps that a refugee camp is a densely populated place with a multitude of idle people not capable of making a living.

"Many fail to see the obvious fact that a refugee is just like any other person, only that their normal lives have been disrupted. A refugee could be anything from a doctor, a teacher to an entrepreneur, a journalist or even a farmer," said Ruhimbana, who now resides in Dadaab.

Dadaab is the world's largest concentration of refugees, a complex of camps in northeast Kenya some 49 miles from Somalia. The 430,000 refugees and asylum seekers are mostly Somali.

They are resilient, their activities in Dadaab camps showing that many refugees are determined to support their families. Ruhimbana himself is focused on showing the world that a refugee can make it too.

"Back in my country, I had just finished my Diploma in Commerce and my life was looking bright before hell broke loose. I had to flee. Members of my family were also forced to flee in different directions without a trace of one another… when I arrived in Kenya in 2007 I was settled in Kakuma refugee camp by UNHCR," he said.

"I had never been in a refugee camp before. When I found myself in one, I thought my dreams would crash within no time. I almost gave up my hope," said Ruhimbana. "I always believed that I have the capability to do anything I ever wanted but I almost doubted myself."

Late in 2007 he was reunited with family members who had arrived in Kakuma and resuming focusing on his future, getting involved in income generating activities within Kakuma camp.

"I got my first job as a French teacher in one of the primary schools in Kakuma. I also raised some money to establish a beauty parlor and a tailoring shop. Whenever I was not in class teaching French, I was either designing clothes in my shop or attending to my customers at my barber shop," Ruhimbana said. The Lutheran World Federation (LWF), an NGO that operates in Kakuma, provided items for his salon.

"My salon was the best thing that ever happened to me in a camp. It did very well, especially because I had good partners, but it only did well for a short while. My competitors from the host community were not happy," Ruhimbana said.

"One evening a gang attacked me in my shop and took off with my working items. I was badly injured and I had to seek UNHCR's protection intervention. That is how I ended up being relocated from Kakuma to Dadaab refugee complex."

"Ifo camp was very populated. There were hundreds of refugees from Somalia being settled there every day. The conditions in Ifo were harsher than they were in Kakuma and there were many existing businesses all over town. It was hard to penetrate but I had to venture into something anyway," Ruhimbana said.

"Despite all the challenges, I settled down quickly and I made a lot of friends and customers from different nationalities. People brought me their mobile phones to charge for them. Some even brought laptops, iPads and iPhones."

Again misfortune struck. He was planning to expand his business when a bomb exploded outside his shop in 2011. He joined the stampede from the site and when he returned he discovered he had been robbed.

"All the expensive electronics had been stolen. My designed clothes had also been stolen. The arrival of the police made things even worse because they randomly arrested all people found within the scene of the incident, including me."

Customers demanding compensation for their stolen items threatened him, and with no way to pay, he again sought UNHCR's protection. He was moved to a new settlement where he won a position as a compound management assistant. The safety and small income have not halted Ruhimbana's desire to better his life. Among his activities is teaching French in the evenings.

"What I would really love to do is to establish my own business first and then get a chance to further my studies even as I do these other jobs. I have people who depend on me you know."

By Duke Mwancha in Dadaab