Displaced farmer in Myanmar thanks UNHCR for their concern and support 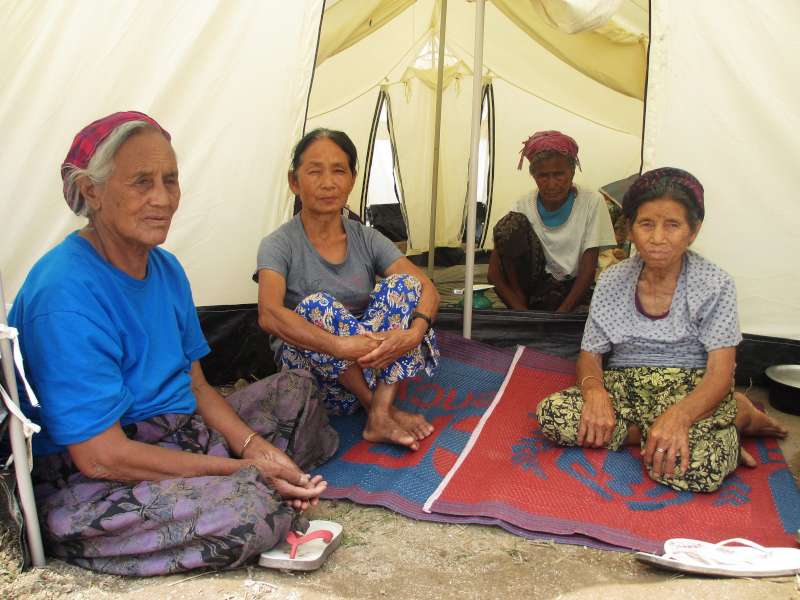 A group of older Kachin women who have been forcibly displaced discuss their future. ©UNHCR/A.Ito

MUSE, Myanmar, June 4 (UNHCR)–Farmer Maran Jar Bu* is used to hard days in the field and long walks to reach the market town from her little village in Kachin state, northern Myanmar. Now she sits in front of an emergency tent, unable to work or move freely.

The 72-year-old looks lost after repeatedly fleeing the conflict between the Myanmar army and the Kachin Independence Army (KIA). Since a 17-year ceasefire broke down in June 2011, more than 100,000 people have been uprooted from their homes.

Following recent clashes between the army and the KIA, more than 4,600 people–mainly farmers–have had to flee their homes since April 10th. For some, it is their second or third displacement. Most of these internally displaced people are now hosted in the camps of Man Win Gyi and Namkham in southern Kachin state, and in temporary accommodations in the northern Shan state city of Muse. "This is now my fourth displacement," sighed Maran Jar Bu. "My home… I don't know where it is anymore, I think it is the last place I have been."

Her current home is in the crowded Man Win Gyi camp, which hosts some 5,000 displaced people–half of whom arrived at the camp in the past month

The local government and NGOs are responding to urgent needs such as food, drinkable water, emergency bathrooms and tents, with the support of international organizations. UNHCR has delivered emergency tents to house the thousands of newly displaced. It has also distributed emergency relief items including blankets, kitchen sets, sleeping mats, plastic sheets, mosquito nets and hygiene kits to some 700 families who fled with few or no belongings.

A key challenge in the humanitarian response is in securing space and identifying where to build temporary shelters. There is limited land available due to the geography of the region and continuing concerns over safety.

"We are very concerned by the effects of fighting close to civilian dwellings and existing Internally Displaced Persons (IDP) camps, which is a threat to safety and security. In some instances IDPs are being displaced for the second, third time or even more, exacerbating their plight and anxiety," said Ayaki Ito, UNHCR's acting representative in Myanmar, during a visit to the camps in recent weeks.

With the current fluid situation, new IDPs are unsure whether their children should start their new school year in their home villages or at the places of displacement. They voice hopes for a return soon, fearing they could miss the planting season in June.

"I am old and I deserve to spend my last days without fear. I just want to be able to find a peaceful place, that would be such a relief," said Maran Jar Bu, who despite the hardships, never stops smiling. UNHCR's Ito asked her how she could stay so positive while recounting such a terrible experience. Maran Jar Bu simply replied, "I am so happy to see you because this means we have not been forgotten."

Citing her strength as an inspiration, Ito said, "UNHCR's work is not just about measurable indicators and how many emergency items have been distributed. Sometimes it is simply about the presence of staff listening to the stories of the people who otherwise would be forgotten.".

By Madea Savary in Muse, Myanmar