South Sudanese refugees in Ethiopia educate their own 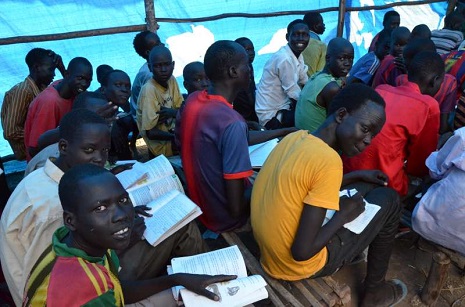 South Sudanese refugees attend a science class at a primary school in Leitchuor Refugee Camp, in Ethiopia's Gambella regional state. In the near future, UNHCR will give hospital tents to Save the Children to improve the conditions of the students attending the school. ©UNHCR/L.F.Godinho

LEITCHUOR REFUGEE CAMP, Ethiopia, May 1st (UNHCR) – Nyarial Gtaka, a 14-year-old refugee girl, concentrates on a blackboard lesson in English about "things that can affect climate" in her homeland of South Sudan.

The classroom – in the biggest refugee camp for South Sudanese in Ethiopia – has makeshift walls covered with plastic sheeting and the 50 students share faded science books. But for the teenager, who lives in Leitchuor Refugee Camp with her aunt, it's the ticket to a great future.

"I want to be a doctor, come back to my country and help my people," says Nyarial, one of 1,500 students who attend classes at the school in two shifts. There's a waiting list twice as long: some 3,000 refugees students hoping new classrooms will open so they can resume studies that were suspended when violence broke out in their country in mid-December last year.

What's really unusual about Leitchuor Primary School – for now, teaching only Grades One to Four – is that it is run by 17 teachers who are refugees themselves, chosen from among the 45,000 refugees who live in this camp.

"Our role here is to share our knowledge with our younger brothers and sisters," says Pal Wiw, the school's 27-year-old principal. He was forced to flee his village in South Sudan's Upper Nile state and walk six days with his three brothers and two sisters to find safety in Ethiopia.

Pal keeps the other teachers accountable, reviews their teaching plans and maintains discipline. He tells the children "to take education seriously," but is also planning to introduce soccer and netball to produce well-rounded youngsters. Balls and nets have just been delivered to the school.

He is not deterred by heavy rain and wind damage to the flimsy building, or the lack of workbooks. Only the continuing conflict in South Sudan causes his smile to falter. He'd like to go home, but knows that is impossible.

"I'm not feeling well because I had to leave my country," Pal says. "Even if I decided to come back I couldn't, because the fighting is going on there."

The UN refugee agency pays Save the Children to help implement this project. It is the only education activity so far in the refugee camps in Ethiopia's Gambella region, which currently host more than 95,000 South Sudanese refugees.

"We are still in the emergency phase, when we are concentrating on saving lives, providing protection, shelter, water, food and sanitation," says Alexander Kishara, UNHCR's emergency operation coordinator in Gambella. "Education is a priority for refugee children. It is very important for children to establish routines and to continue learning," he stresses.

"We are already looking for land for proper schools and as soon as we possibly can, we will establish more schools," adds Kishara. "We know it's important to get these children back into regular schools to build South Sudan's future generations."

At 19 years, William Chol is one of the oldest students in the primary school, as his education had frequently been interrupted. "I need to finish my studies to make plans for my future. I would like to be an aircraft pilot or an engineer," says the young man, who left his mother and brother behind in the South Sudan capital, Juba, and came to the camp alone.

"I feel we are the ones that will change our country," William adds. His classmate Nyarial chimes in: "We cannot be like our parents. I want to learn and support my country."