At five years old, Shamha was diagnosed as malnourished and given a pink wristband to show people at Mazraq refugee camp in Yemen that she has not been getting enough to eat. The little girl had been sick since she was a baby but thanks to the high-energy food she received at the camp, she made a slow recovery. Like Shamha, 2.2 million children in Yemen under the age of five are at risk of suffering from acute malnutrition. 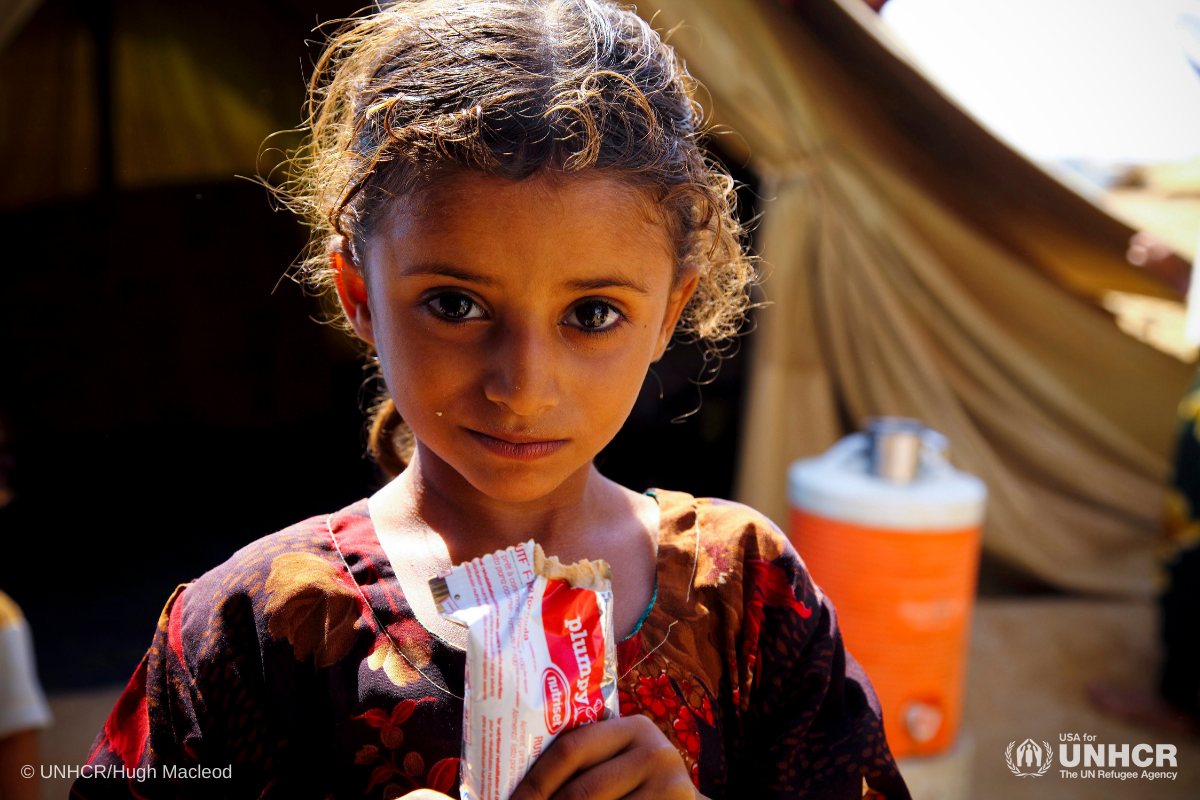 In a world where we produce enough food to feed everyone, up to 811 million people — more than 10 percent of the world's population — still go to bed hungry each night. In 2021, there were 45 million people at the ‘emergency’ phase of food insecurity, just one step away from a declaration of famine. In Afghanistan, 55 percent of the population is suffering from acute food insecurity – and the country’s needs are surpassing those of the other worst-hit countries, including Ethiopia, South Sudan, Syria and even Yemen. But what is famine and how can we stop it?

2. What are the main causes of famine?

3. Which countries are on the brink of famine?

4. Who is most at risk when a famine strikes?

5. What is UNHCR doing to help?

Famine is a situation in which a substantial proportion of the population of a country or region are unable to access adequate food, resulting in widespread acute malnutrition and loss of life by starvation and disease.

While many countries worldwide face food security crises, famine is only declared when certain conditions are met. The United Nations uses a five-phase scale known as the Integrated Food Security Phase Classification (IPC) to assess a country’s food security situation. A famine classification is the highest on the IPC scale (Phase 5) and occurs when at least 20 percent of the population face extreme food shortages, acute malnutrition rates exceed 30 percent – meaning that people experience the most extreme and visible form of undernutrition – and two out of 1,000 people die from starvation on a daily basis. 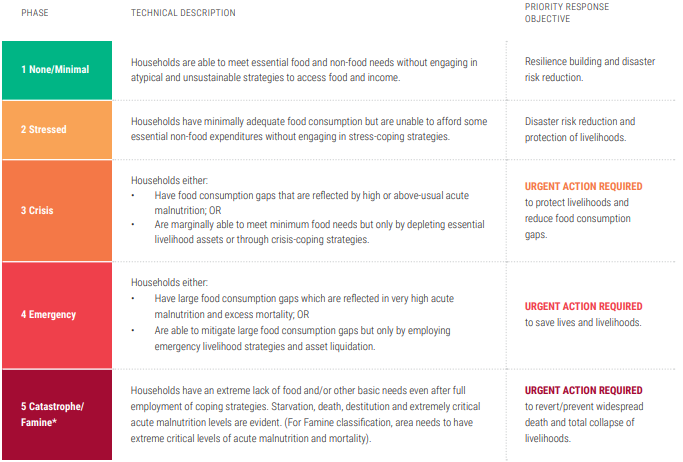 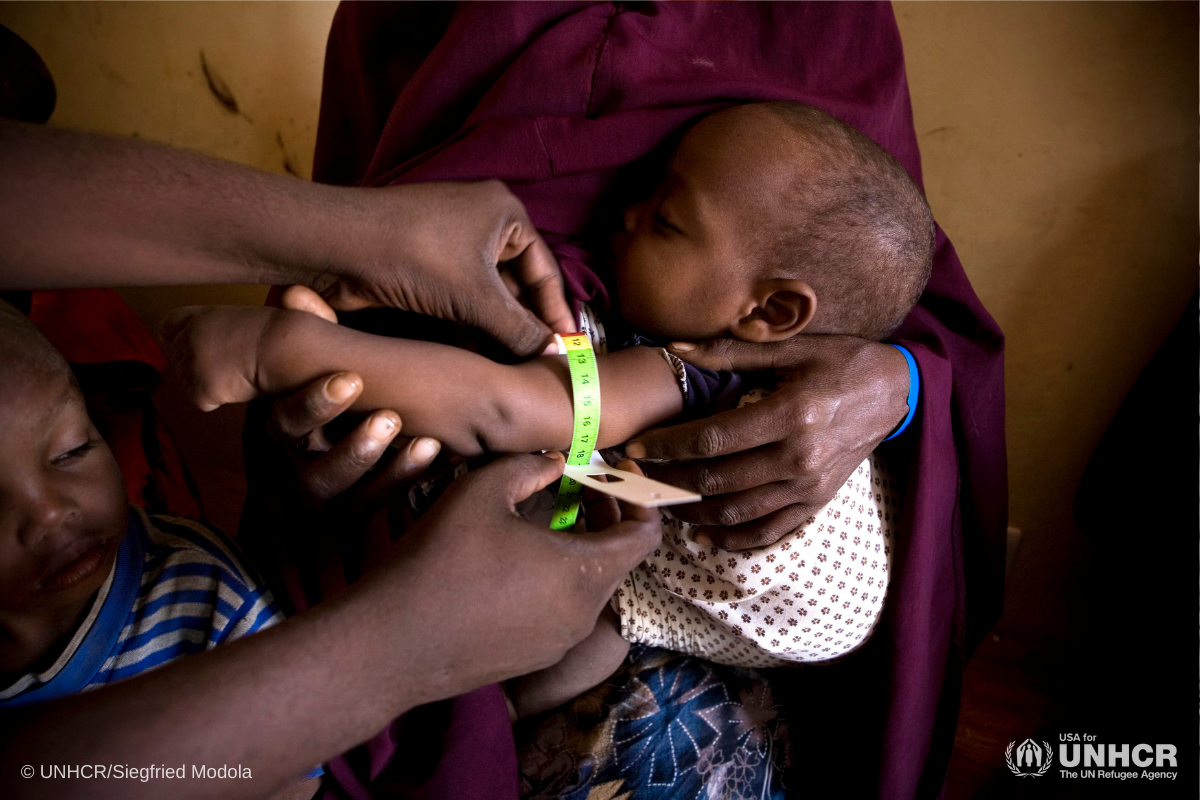 What are the main causes of famine?

Famine can stem from a combination of multiple factors, such as conflict, displacement, chronic poverty, food insecurity, natural disasters and climate change.

Wars and conflict are usually the primary drivers of famine as they lead to forced displacement, disrupt people’s traditional ways of accessing food and income, hinder humanitarian access and push economies into a long-term decline. Natural disasters - such as droughts, flooding and cyclones - and the effects of climate change can also lead to famine, jeopardizing agriculture and livestock activities in regions where the majority of the population live off the land. 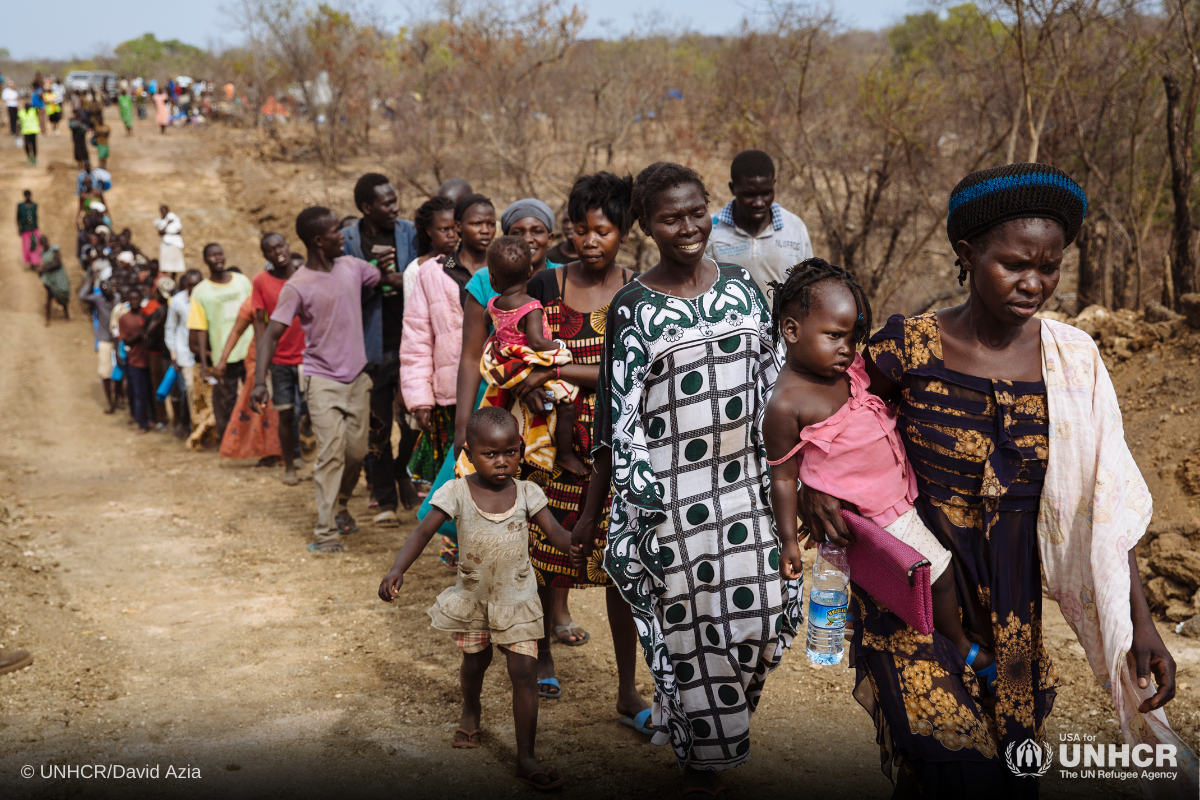 Which countries are on the brink of famine?

Food insecurity is soaring across 20 hunger hotspots where conflict, economic shocks, natural disasters and limited humanitarian access are putting millions of lives at risk, according to a new UN report. People in South Sudan, Yemen and the northern parts of Ethiopia and Nigeria are on the brink of famine.

Afghanistan, the Central African Republic, the Democratic Republic of the Congo, Haiti, Honduras, the Sudan and Syria remain countries of particular concern. This is due to the high numbers of people in critical food insecurity coupled with worsening drivers expected to further intensify life-threatening conditions. Afghanistan in particular is projected to face a record high of people in critical food insecurity and there is a serious risk that parts of the population will face starvation and death (IPC Phase 5) if the crisis is not contained.

Sahel, as a region, is likely to reach the highest number of acutely food-insecure people in the past eight years under the combined impact of erratic rainfall, record high food prices and – for Central Sahel – further security deterioration. 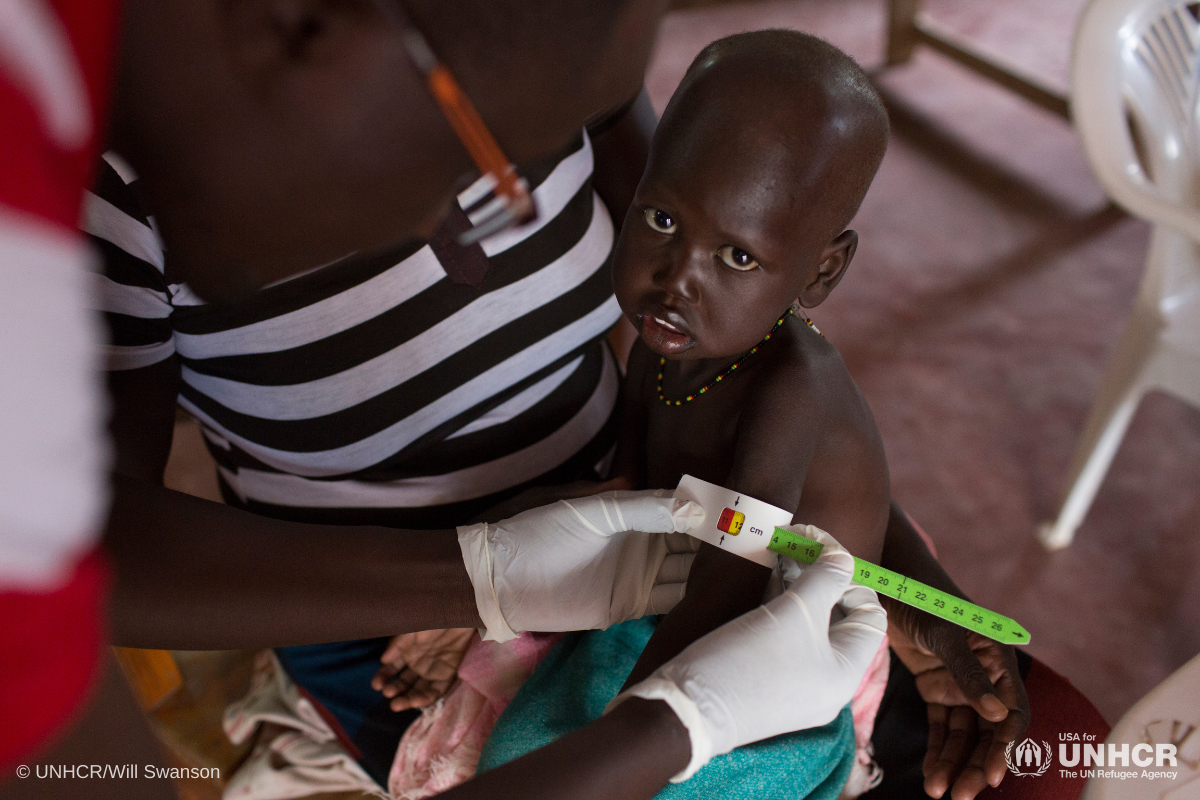 Who is most at risk when a famine strikes?

Those without adequate nutrition are at most risk during a famine. Among them, displaced children - especially those under 3 years - and pregnant and nursing women are particularly vulnerable. In Yemen alone, over 2.2 million children under the age of five, including
538,000 severely malnourished, and 1.3 million pregnant and lactating women were projected to suffer from acute malnutrition in 2022.

Children with acute malnutrition are deprived of essential vitamins and minerals required for their proper growth, making them prone to disease, severe developmental delays and even death. In famine-like conditions, millions of children are pulled out of school and sent to work, begging on the streets and often eating just once a day.

Displaced women are also disproportionately impacted during famines as they often face barriers to access work opportunities and are at heightened risk of gender-based violence, forced labor and early marriage. Malnourished pregnant or nursing mothers are particularly vulnerable to deadly diseases and pregnancy complications. 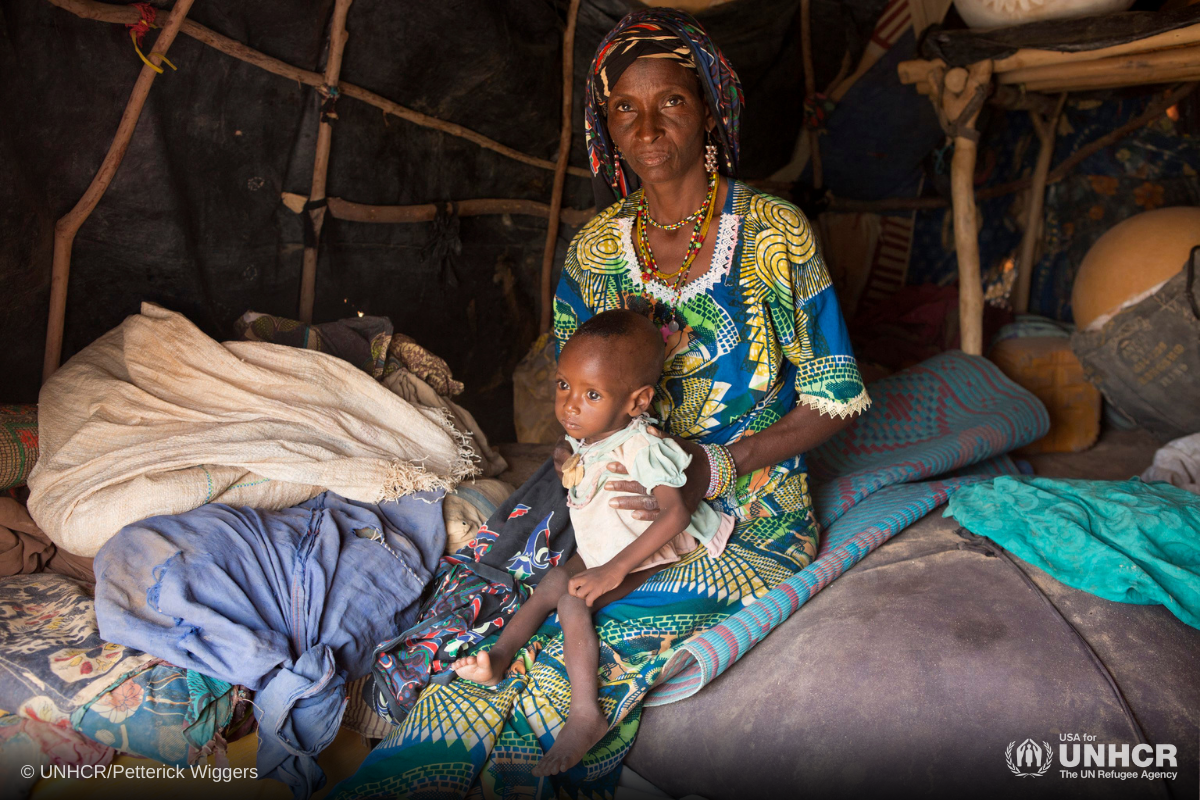 What is UNHCR doing to help?

The UN Refugee Agency is working with partners to deliver cash-based assistance and lifesaving supplies - such as clean water, food and sanitation items - to vulnerable refugee and internally-displaced families struggling with food insecurity so that they can cover their most basic needs. Some of UNHCR’s activities in refugee camps also include nutritious interventions to ensure people have access to clean water and nutritious food - especially women, children and other vulnerable groups. UNHCR also helps people suffering from malnutrition to access appropriate medical treatment and works with local authorities to identify livelihood opportunities that promote self-reliance.

How you can help people on the brink of famine…