“I feel at home in New York because home is where [I] feel safe, I can express myself, get a job, retain a job and participate in community events despite my sexual orientation and country of origin.”

Edafe Okporo is the Executive Director of the RDJ Refugee Shelter in New York City — the only shelter in the city specifically serving homeless refugees and asylum-seekers. Edafe works every day helping resettled refugees in the United States rebuild their lives. He understands their struggles because he was once in their shoes as well.

As a gay man living in Nigeria, Edafe faced discrimination, threats of violence and potential imprisonment. Nigeria is one of many countries in the world that criminalizes same-sex relationships. After being attacked by a mob, Edafe fled his home.

When he arrived in the United States, Edafe says it’s the kindness and compassion of strangers that helped him survive. First Friends of New Jersey and New York, an organization that connects refugees with legal representation and housing, helped Edafe access legal services and his first shelter. “How would I have survived if not for the kindness of strangers,” says Edafe.

His first job in the U.S. was with another local organization, Eat Offbeat — a delivery service that employs refugee chefs to create and share meals from their home countries. From there, Edafe went on to join the RDJ Shelter as its Executive Director, where he could help refugees and asylum-seekers find housing.

For LGBTIQ+ refugees, finding a home doesn’t end with finding housing. The RDJ Shelter also assists with offering English classes, job training and providing food through their pantry. Helping refugees and asylum-seekers connect with the community is also essential in their resettlement journey. Through events like movie nights, the local community has the opportunity to connect with refugees and make them feel more welcome in America.

"Especially as a displaced person, community makes you feel at home,” Edafe explains. “Community is the bedrock of [LGBTIQ+ refugees’] integration in a new country.” 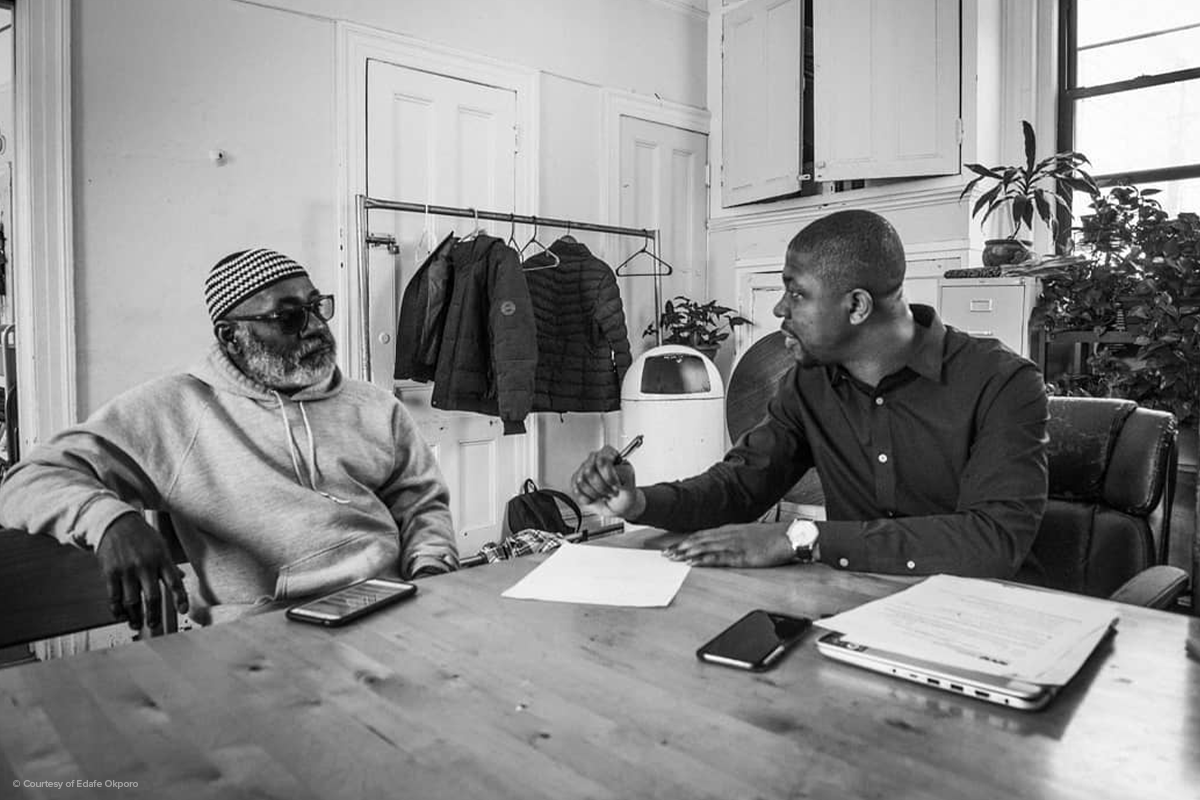 Even Edafe is still working on making the U.S. his home. As the Executive Director of the RDJ Shelter, he struggles to sit still and unwind. Instead, he finds peace in taking walks around Central Park and watching television shows that relate to American culture. Ultimately though, he feels comfortable as a gay man and resettled refugee in New York because, as Edafe describes, “this is the place where my accent does not make me other and my bright colored clothes are ignored because of the busyness of New Yorkers.”

During Pride, we celebrate the courage and strength required for LGBTIQ+ refugees to live freely and openly. Edafe is a guide and leader not only for resettled refugees, but also for his fellow New Yorkers and others in the LGBTIQ+ community. With your support, more refugees like Edafe will have the opportunity to find safety, live freely and uplift others in their communities.