Around the world, refugee women lead their families and communities and pave the way for future generations. Despite the incredible challenges they face, they are strong, resilient and passionate about making the world a better place.

Among these remarkable women are delegates from Refugee Congress, who represent all 50 states and the District of Columbia. These delegates use their voices and experiences to inform and influence decision-makers on critical domestic and international issues relating to refugees.

This International Women’s Day, meet five female Refugee Congress delegates who are inspiring change in their communities and beyond, and find out why Women’s Day is so important to them. 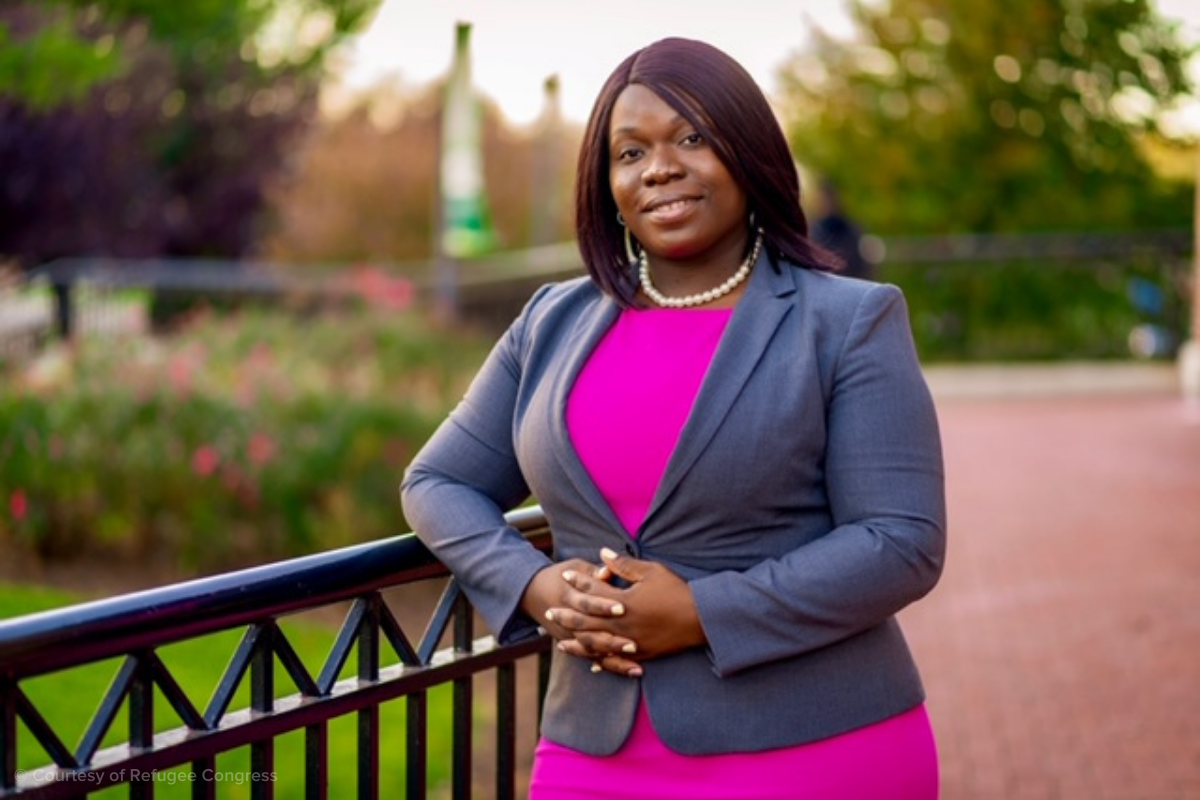 Lourena Gboeah came to the United States as a resettled refugee in 1992, when she was only 4 years old, after her family fled war and harassment in Liberia.

For the last 18 years, Lourena has been working with vulnerable and marginalized populations—including immigrants and resettled refugees—as a volunteer, intern, advocate and leader. She currently serves as Associate Director of Student Services for the Year Up Philadelphia program. In her free time, she creates and curates content to inspire millennial moms, wives and professionals.

“International Women’s Day is one of the highlights of my year,” says Lourena. “It’s a day in which women’s voices are amplified around the globe. It’s a day in which I reflect on my own mother’s journey as a refugee who fled the Liberian civil war with six of her eight children. I also think of women across the globe who are suffering, and I celebrate women who are winning. The fight for equality and justice continues. In unity with this year’s International Women’s Day theme, I raise my hand and choose to challenge ‘inequality, call out bias, question stereotypes, and help forge an inclusive world.’”

Drocella Mugorewera was born and raised in Rwanda, where she worked as a parliamentarian, a development consultant and the Secretary of Lands, Environment, Forestry, Water and Mines. She was forced to flee her home country because of violence and was resettled to Tennessee in 2009.

Today, Drocella is a public speaker, family coach and Executive Director of Bridge Refugee Services, a nonprofit dedicated to protecting and serving refugees in Tennessee. She is also an active member of a number of refugee and racial justice groups in her hometown. In her free time, she enjoys nature, spending time with family and friends, reading, traveling and being a grandmother.

This International Women’s Day, Drocella shares a powerful message: “Refugee, asylee, asylum-seeker and vulnerable migrant women -- I celebrate you, especially during this month. Wars, violence, persecution, rape, torture and human trafficking tried to knock you down, but you bounced back. You are unshakeable, you are unstoppable, you are resilient and tenacious. Thank you for providing for your families and our communities.”

Clara Hart fled Mozambique in the 1960s out of fear of political persecution. In 1988, she was resettled to the United States, where she now lives in South Dakota. She completed her degree in political science shortly after arriving in the United States.

For the last 10 years, Clara has taught cultural competency to nursing students. She also participates in many civic and volunteer organizations, and co-founded the Refugee Women’s Association of Sioux Falls.

“We are all interconnected. If one of us is hurt, all of us are hurt. It is up to us to embrace and nurture one another,” says Clara about the women of the world. “We have seen over and over that one person can change the trajectory and make a difference for others. In order to do so, we must first self-evaluate and change the ‘me’ to ‘us.’” 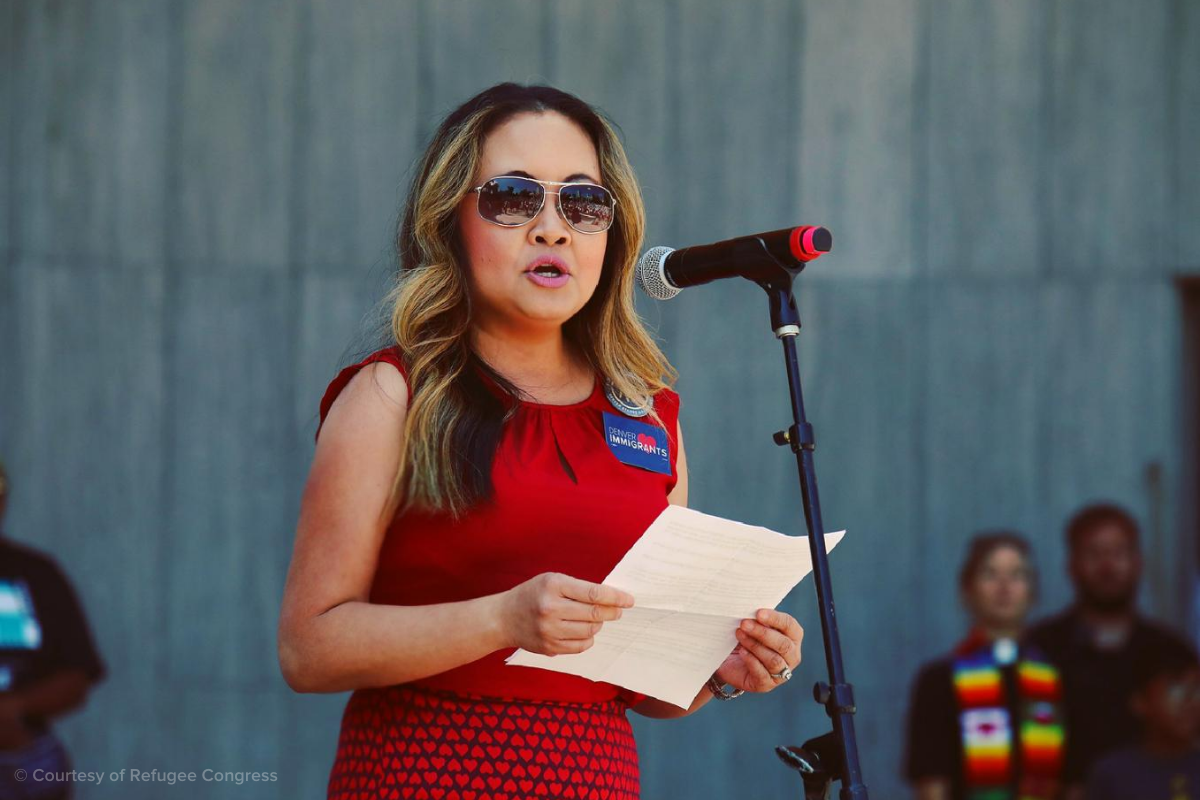 Nga Vương-Sandoval and her family were forced to flee their home because of the Việt Nam War. They were displaced in refugee camps for many years before eventually resettling in the United States.

Over the course of her career, Nga has served at the state homeland security office, specializing in counterintelligence and counterterrorism, as well as working as affiliate faculty at two universities. Today, she serves as an Investigator at the Colorado Department of Law.

As a Việtnamese refugee, Nga embraces her heritage and refugee experience and is active in a number of advocacy roles. In her free time, she enjoys meeting new people, reading, writing, watching documentaries, traveling, exploring new cuisines and creating origami.

Nga remarks on the power of women, “No matter our country of origin or our mother tongue, women have recognized for centuries that we’re an undervalued source of intellect, strength and leadership. We’ve worked tirelessly in the background and fiercely in the foreground of social justice human rights movements. On International Women’s Day and every day, let us continue to remind the world of our worth and power as women."

Lubab Al-Quraishi came to the United States as a refugee from Baghdad, Iraq in 2014, along with her husband and two children. She holds a medical degree with a specialty in surgical pathology and worked as a doctor and Assistant Professor of Medicine at Baghdad Medical College in Iraq.

Since arriving in the U.S., Lubab has been working toward returning to her beloved profession as a medical doctor. Today, she works as a licensed pathologist assistant in a medical lab.

During the pandemic, she has been volunteering on the front lines to do COVID testing. She received a temporary license to practice medicine and hopes to someday return to working as a doctor full time. In her free time, Lubab enjoys cooking and cake decorating.

In an inspiring message for International Women’s Day, Lubab says, “Women are born to be leaders. You are chosen to do two-thirds of the work, sister. Because of your presence, others are better and the impact lasts in your absence. You are beautiful, you are powerful.”

Empower refugee women around the world…

This International Women’s Day, you can help protect and empower refugee women around the world by becoming USA for UNHCR’s newest monthly donor. Your support will help provide refugees with critical assistance during their greatest times of need and help them rebuild for a better future.