Global forced displacement is at an all-time high, increasing every year over the past decade. The Russian invasion of Ukraine – causing the fastest and one of the largest forced displacement crises since World War II – and other emergencies, from Africa to Afghanistan and beyond, pushed the figure over the dramatic milestone of 100 million. Food scarcity, inflation and the climate crisis continue to contribute to displacement concerns. Despite these alarming trends, UNHCR, the UN Refugee Agency, continues to support people forced to flee from war, violence and persecution at their greatest moment of need. 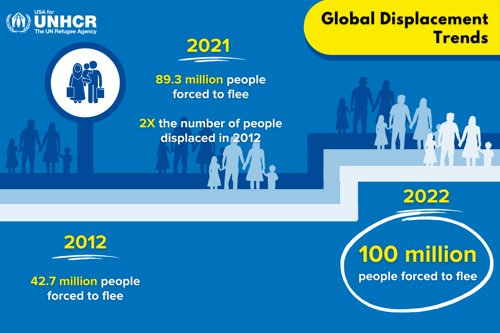 The war in Ukraine is the fastest and largest displacement crisis since World War II and follows a year marked by escalating violence around the globe. According to the World Bank, at least 23 countries with a combined population of 850 million people experienced medium- or high-intensity conflicts in 2021. Afghanistan, Ethiopia, Burkina Faso, Myanmar and Venezuela are among countries that experienced an increase in internal and cross border displacement due to escalating conflict.

The number of people forced to flee has more than doubled in the past decade. In 2021, an 8 percent increase in displacement forced an additional 7 million people to flee their homes. By the end of 2021, there were 27.1 million refugees globally and 53.2 million people displaced within their home countries. 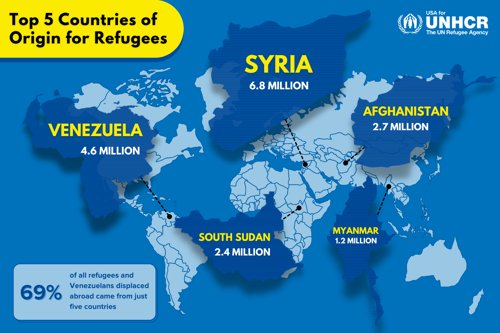 The protracted decade-long conflict in Syria has forced millions of Syrians to flee, making them the largest group of refugees with 6.8 million displaced. A majority of Syrian refugees are hosted in neighboring countries such as Türkiye, Lebanon and Jordan. By the end of 2021, Syrian refugees made up nearly 30 percent of all globally displaced refugees.

Venezuelans made up the second-largest group displaced across borders. More than half a million Venezuelans fled their country in 2021 as COVID-19 restrictions eased in the region. Nearly all of the 4.6 million Venezuelans displaced across borders live in the Americas without formal refugee status. Afghan refugees accounted for the third largest group, with hundreds of thousands displaced in 2021 in the lead up to the Taliban’s takeover of Kabul. Violent conflicts in South Sudan and Myanmar triggered hundreds of thousands of new displacements inside and outside of the country. 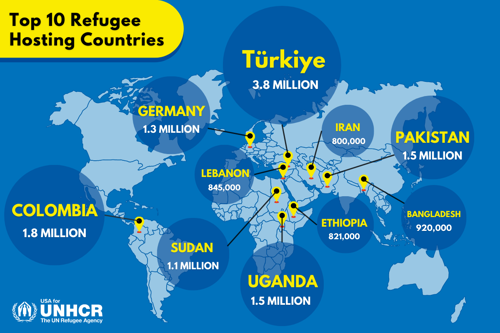 Since 2014, Türkiye has hosted the largest population of refugees in the world. By the end of 2021, the country remained the largest refugee-hosting country with more than 3.8 million refugees, or 15 percent of all people displaced across borders. Of the nearly 4 million refugees hosted in Türkiye, almost all are Syrian refugees.

An estimated 83 percent of refugees are hosted by low- and middle-income countries. Türkiye, Colombia and Uganda were the three largest host countries for people displaced across borders in 2021. Colombia hosted the second largest population of refugees with 1.8 million people, a figure that increased last year due to an influx of Venezuelans seeking refuge in the country. Uganda hosted the third largest group of refugees at 1.5 million, mostly from South Sudan and the Democratic Republic of the Congo. 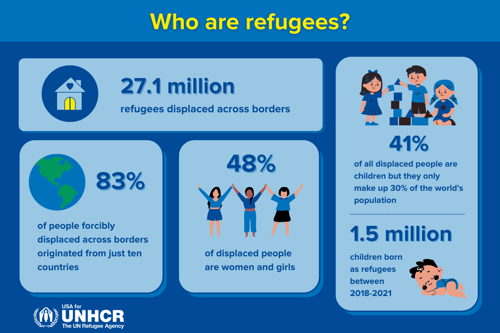 Children are overrepresented in the global refugee crisis, accounting for 41 percent of all forcibly displaced people but only making up 30 percent of the world’s population. According to UNICEF, displacement of children has reached record levels with 36.5 million children displaced from their homes in the past year—the highest number recorded since WWII. Protracted or acute conflicts force refugees to resettle in other countries for years, with many raising families away from home. UNHCR estimates that between 2018 and 2021, more than 1.5 million children were born as refugees.

Women and girls represent nearly half, or 48 percent of the 89.3 million people who were forcibly displaced by the end of 2021. Women refugees and IDPs fleeing from persecution or conflict are at grave risk of sexual and gender-based violence. In 2021, women and girls at risk accounted for 17 percent of all resettlement cases submitted to UNHCR. Just over half, or 52 percent of all resettlement submissions concerned children. 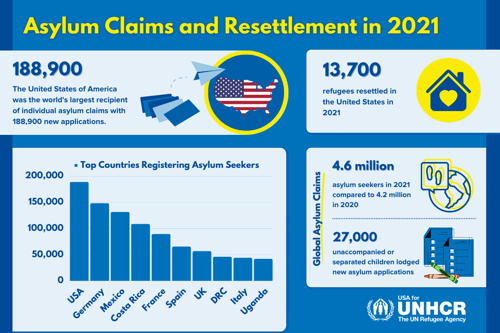 The United States was the world’s largest recipient of new individual claims with 188,900 applications in 2021. More than half of all new applications to the U.S. were lodged by nationals from just five countries in the Americas: Venezuela, Guatemala, Honduras, El Salvador and Cuba. The U.S. welcomed 13,700 refugees in 2021—mainly from the Democratic Republic of the Congo, Syria and Sudan.

Despite signs of progress, the speed and scale of global forced displacement is quickly outpacing solutions for refugees. "Every year of the last decade, the numbers have climbed. Either the international community comes together to take action to address this human tragedy, resolve conflicts and find lasting solutions, or this terrible trend will continue,” said Filippo Grandi, UN High Commissioner for Refugees.

With more than 100 million people forced to flee their homes because of war, violence or persecution and critical emergencies adding to this figure everyday—we must act in solidarity and welcome people seeking safety from conflict. Join USA for UNHCR and add your name to say: Every person has the right to seek safety.