Five things you should know about Afghanistan

Over the past year, parts of Afghanistan have become safer, but the country is in the grip of a humanitarian crisis.

Last August, the eyes of the world were on Afghanistan amidst the dramatic scenes at Kabul airport as people rushed to escape. Today, the global spotlight has shifted elsewhere, yet millions of Afghans are facing a humanitarian crisis.

UNHCR, the UN Refugee Agency, remains focused on supporting millions of Afghans facing conflict and displacement. But international organizations, including the UN, need more funding to alleviate the suffering there.

Here are five things to know about Afghanistan and how we are trying to help:

1.    Afghans make up one of the world’s largest populations of people uprooted by conflict and human rights abuses.

Afghans have been fleeing their country since 1979. While many have returned, there are 2.3 million Afghans registered as refugees in the region, mostly in neighboring Pakistan and Iran. A further 180,000 Afghans have sought asylum in the region since the beginning of 2021.

Another 3.5 million Afghans are displaced inside their country due to conflict, including more than 800,000 who have been uprooted since January 2021 – the majority by fighting that took place between May and August 2021.

Over the past year, improved security in parts of Afghanistan has allowed many people to return home. But they often come back to damaged or destroyed homes, a war-ravaged infrastructure and a lack of jobs. Meanwhile, some areas have witnessed sporadic violence and fresh displacement. An earthquake in June in the southeast of the country followed by successive aftershocks rendered many homeless.

What UNHCR is doing: We assisted 1.1 million people in 2021, particularly with winter support like shelter materials, blankets and cooking fuel. We also supported neighboring countries to help Afghan refugees. For those who have chosen to return to homes they previously fled, we have provided cash to repair or rebuild them and projects to create livelihoods. So far in 2022, we have provided cash and other types of assistance to 560,000 people while our infrastructure projects like schools, community centers, water systems, and health centers, have benefited 2.5 million Afghans.

2.    Half of the people in Afghanistan are facing extreme hunger.

Afghanistan’s economy has collapsed over the past year. The combination of a prolonged drought, soaring food prices and job losses have pushed around 25 million Afghans into poverty, with more than half the population now reliant on humanitarian aid to survive. Foreign development aid has come to a grinding halt.

Three quarters of people’s incomes is now spent on food. Six million people are teetering on the brink of famine and 1 million children face severe malnourishment.

While a widespread hunger crisis was averted last winter, food prices continue to rise – partly due to the war in Ukraine – as household incomes continue to shrink. 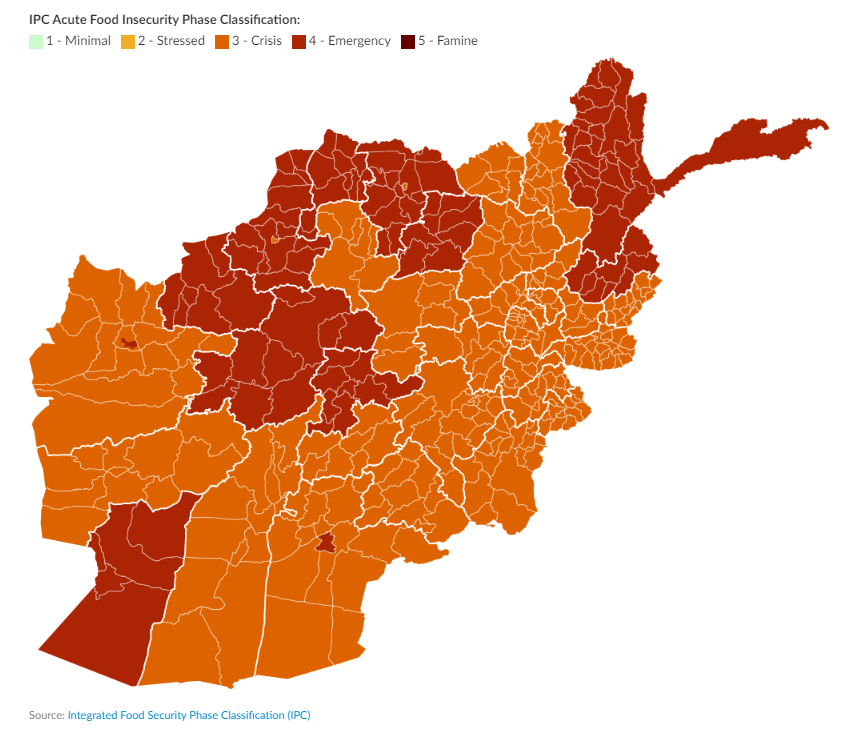 What UNHCR is doing: Improved security has allowed us to expand our presence to areas of the country where we had no access for decades and we now operate out of nine offices across the country. So far in 2022, we have supported 300,000 people with cash assistance to meet their basic needs. Cash-for-work programs involving road building and canal clearing are providing an income for 4,000 workers, supporting some 28,000 family members.

Climate change is driving increasingly frequent, intense natural disasters that are hitting communities already devastated by conflict. Even before the Taliban’s return, a severe drought had withered crops and reduced groundwater levels. The drought continued into 2022 and was accompanied by a heatwave so intense it led to multiple wildfires in the country’s east. Then came unseasonably heavy summer downpours and flash flooding in many parts of Afghanistan that submerged villages and damaged houses, roads and farmlands. 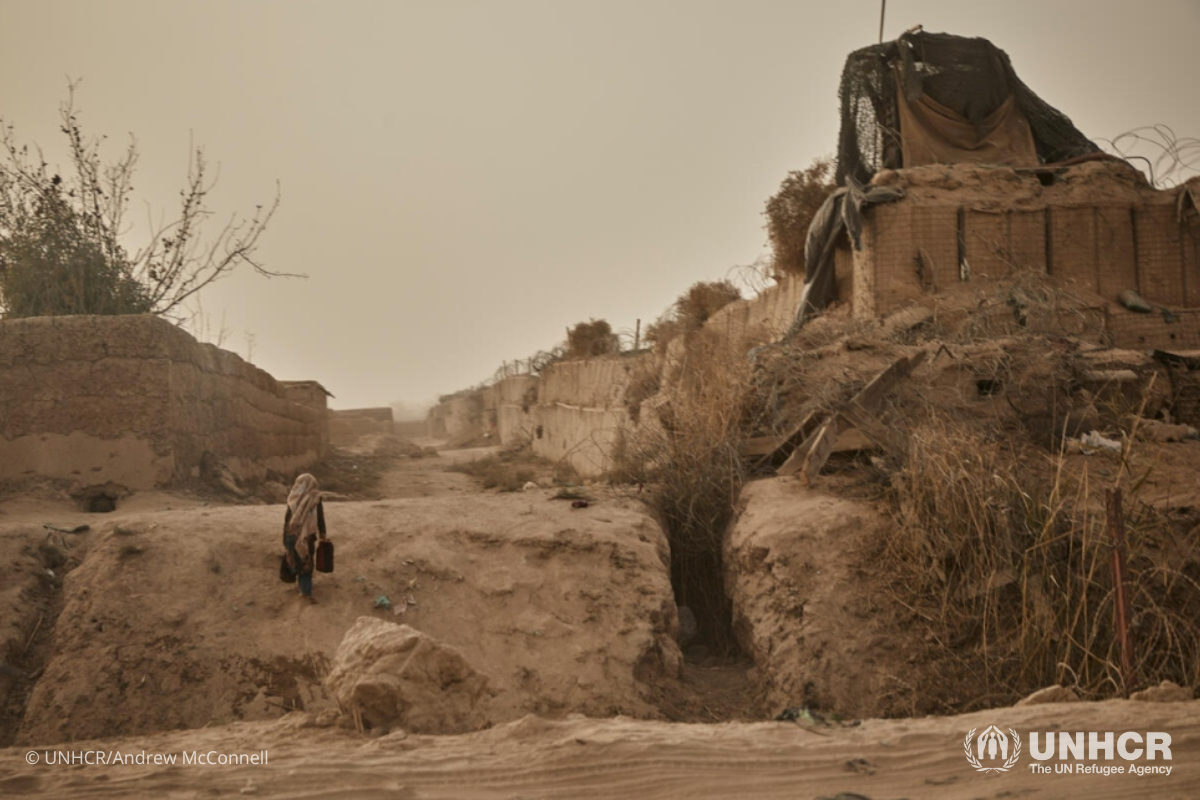 What UNHCR is doing: In the wake of natural disasters such as the June earthquake, UNHCR delivers tents, household goods, hygiene items, and solar lamps. We plan to construct 2,300 earthquake-resilient homes in the two provinces worst affected by the earthquake.

4.    Afghanistan’s women and girls have watched their rights disappear.

Various edicts over the past year have stifled the hopes and dreams of half the population.

Most secondary schools for girls remain closed and many women have lost their jobs, while others lack the required male guardian to accompany them when they venture out of their homes. With many women no longer able to earn a living, families have become further impoverished and young girls are being forced into marriage. 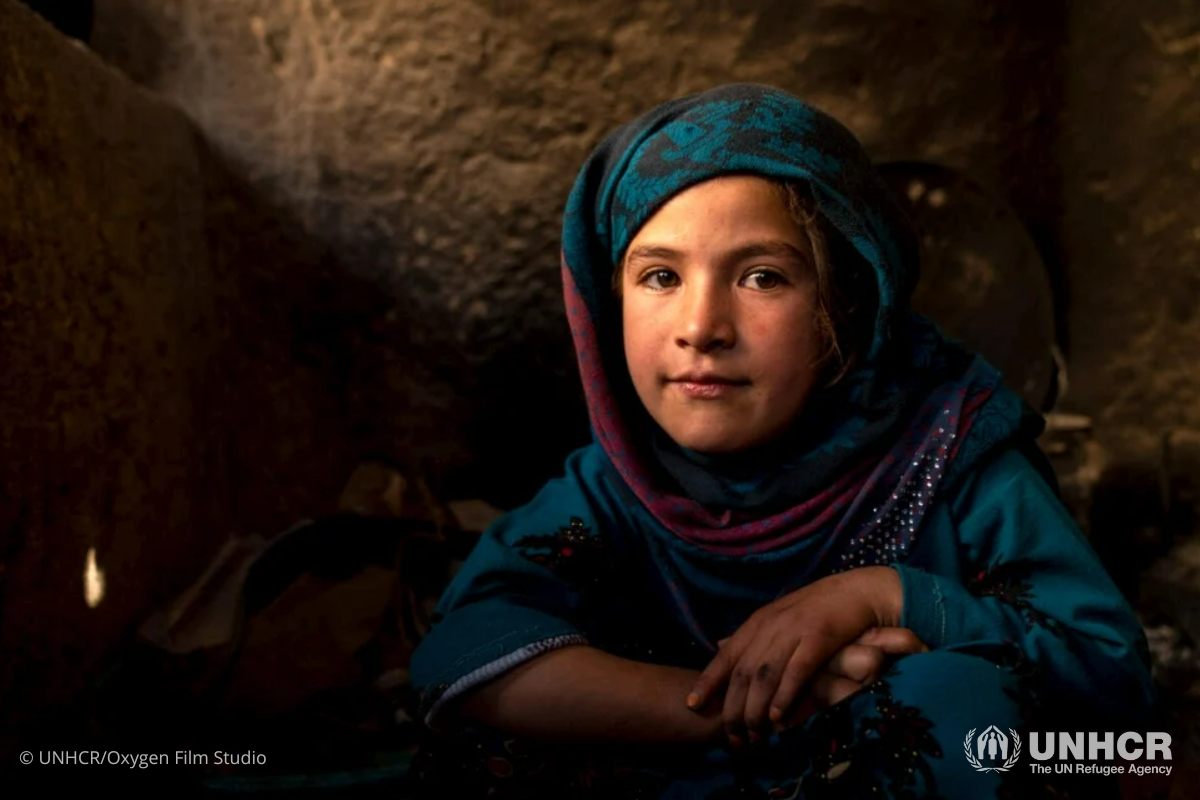 What UNHCR is doing: We have constructed a number of empowerment centers where women can take computer and coding classes or receive training and support to run businesses. Throughout the country, we also run livelihoods projects like mobile bakeries, tailoring training, and poultry projects which lift women-headed households out of poverty.

A coordinated effort by the United Nations – including UNHCR – has delivered humanitarian assistance including food, shelter, cash and household supplies to nearly 23 million people over the past year and helped to avoid a famine last winter.

Despite these efforts, more than half the population (some 24.4 million people) remain in need. They include displaced people, many of them living in makeshift settlements in grim conditions. With winter’s freezing temperatures only a few months away, needs are likely to grow further.

The UN sought US$4.4 billion to fund its overall humanitarian response plan for Afghanistan this year but has so far only received about 41 percent of that figure, leaving a critical gap of more than $2.4 billion.

Meanwhile, UNHCR’s own appeal for its response to the Afghanistan situation is still in need of an additional $229.7 million to carry out its work in Afghanistan and for Afghan refugees in neighboring countries. 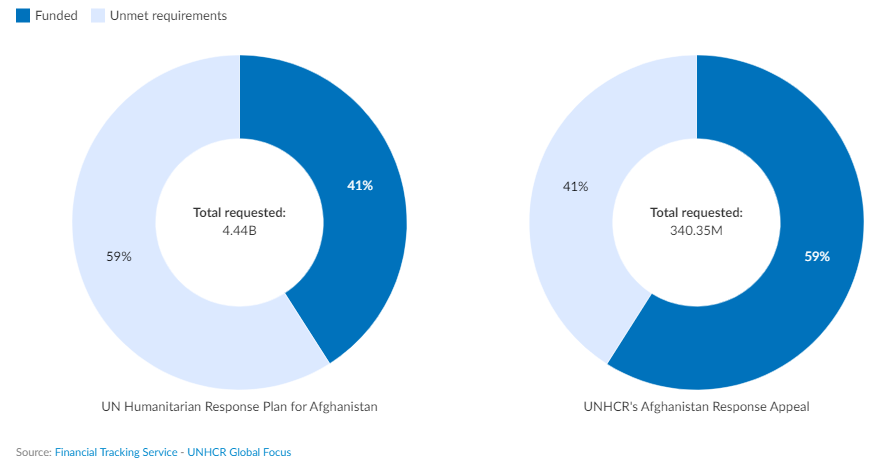 More humanitarian assistance is desperately needed to help Afghans survive the coming winter, but only a functioning economy, security and the restoration of women and girls’ human rights will allow them to thrive.

What UNHCR is doing: UNHCR has stayed and delivered in Afghanistan over the past year and continues to provide life-saving assistance to the most vulnerable Afghan people force to flee, as well as returnees and their host communities.

UNHCR is on the ground providing urgent aid, such as food, shelter, clean water and medicine. Your gift will have an immediate impact on displaced Afghan families who are escaping conflict and persecution. Start making a lifesaving difference and make a donation today.