August 25, 2022 marks five years since the largest exodus of Rohingya refugees fled Myanmar, during which more than 700,000 Rohingya escaped persecution finding safety in Bangladesh. A Muslim minority in Myanmar, the Rohingya have faced violence and human rights abuses, but massive scale violence and armed attacks in August 2017 forced the largest exodus of Rohingya refugees in decades.

Most fled to Kutupalong and Nayapara refugee camps — the largest refugee settlements in the world. Nearly one million Rohingya refugees now reside in the Cox’s Bazar region of Bangladesh. With such a large population of refugees to support, UNHCR, the UN Refugee Agency, has shifted its focus from providing emergency relief to providing sustainable, community-based solutions. By offering training programs and self-reliance initiatives to Rohingya refugees, UNHCR is ensuring long-term protection for these communities.

Today, five years after the crisis made headlines, see how Rohingya refugees in Bangladesh are rebuilding their lives and creating a more sustainable environment for themselves and their host communities. 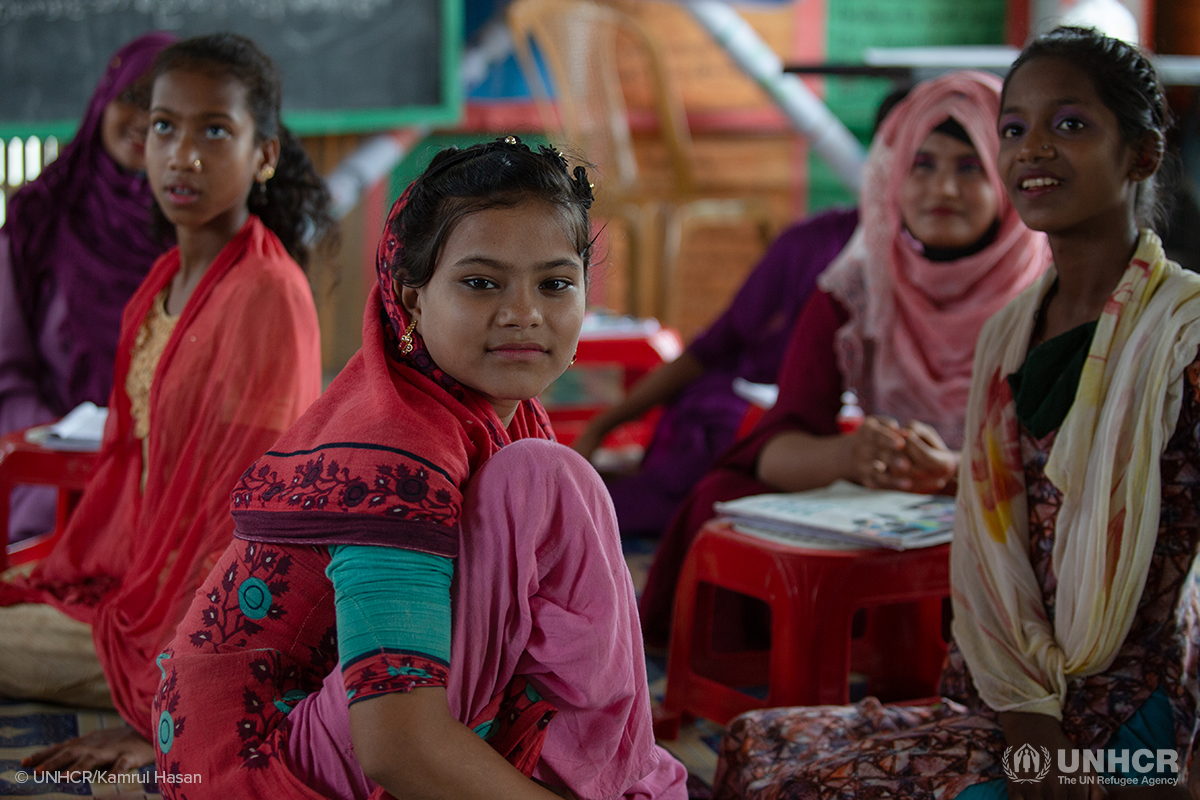 To help children recover, UNHCR facilitates educational initiatives and “adolescent clubs” throughout the refugee settlements allowing children to learn, play and grow. These adolescent clubs serve as a place where teenagers can gather to share their feelings, cope with trauma and build positive relationships with other young people in the camp. These clubs also serve as education centers where teenagers can learn basic literacy, numeracy, life skills and skills training. 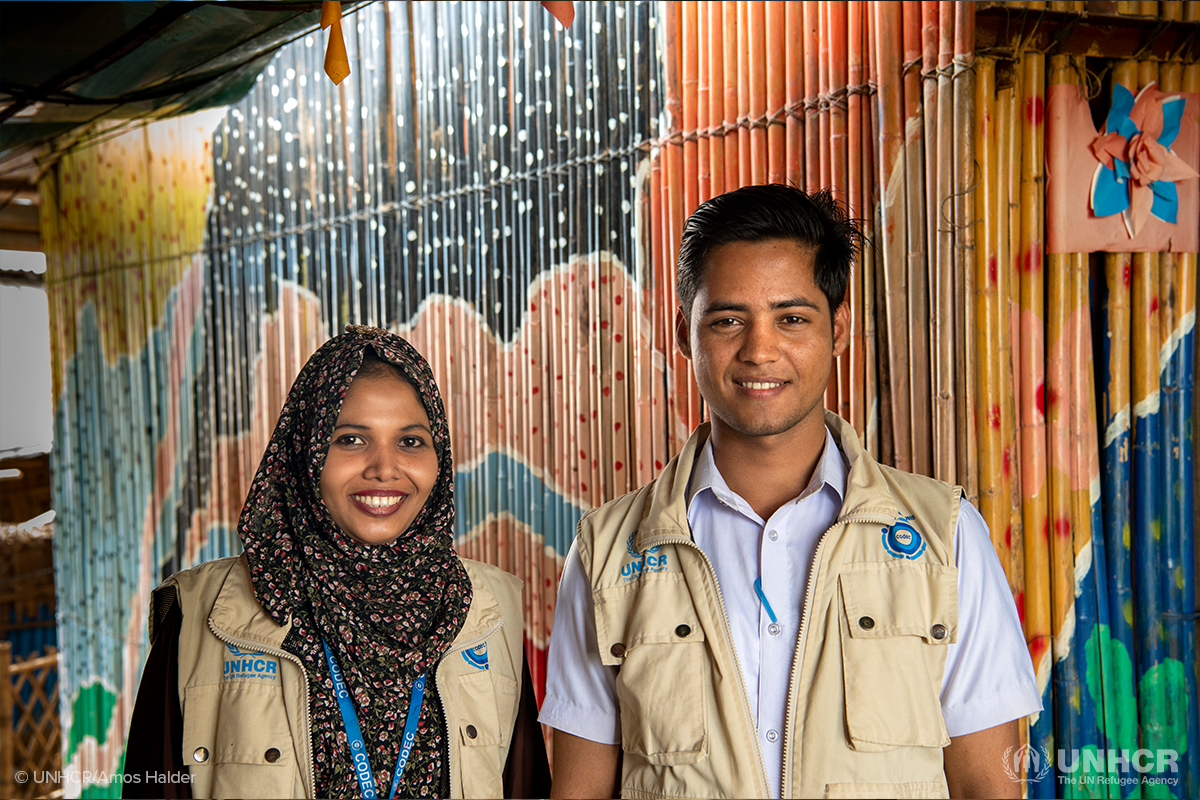 For Rohingya adults, these learning centers and adolescent clubs can be an opportunity to practice their own skills, connect with youth in their community and build relationships with their host communities. Shah (right), a Rohingya refugee who teaches Burmese in one of the 5,600 UNHCR-supported learning centers in Cox’s Bazar is paired with Minhar, a Bangladeshi citizen who teaches English and numeracy. Together, they provide a well-rounded education for Rohingya refugee children. 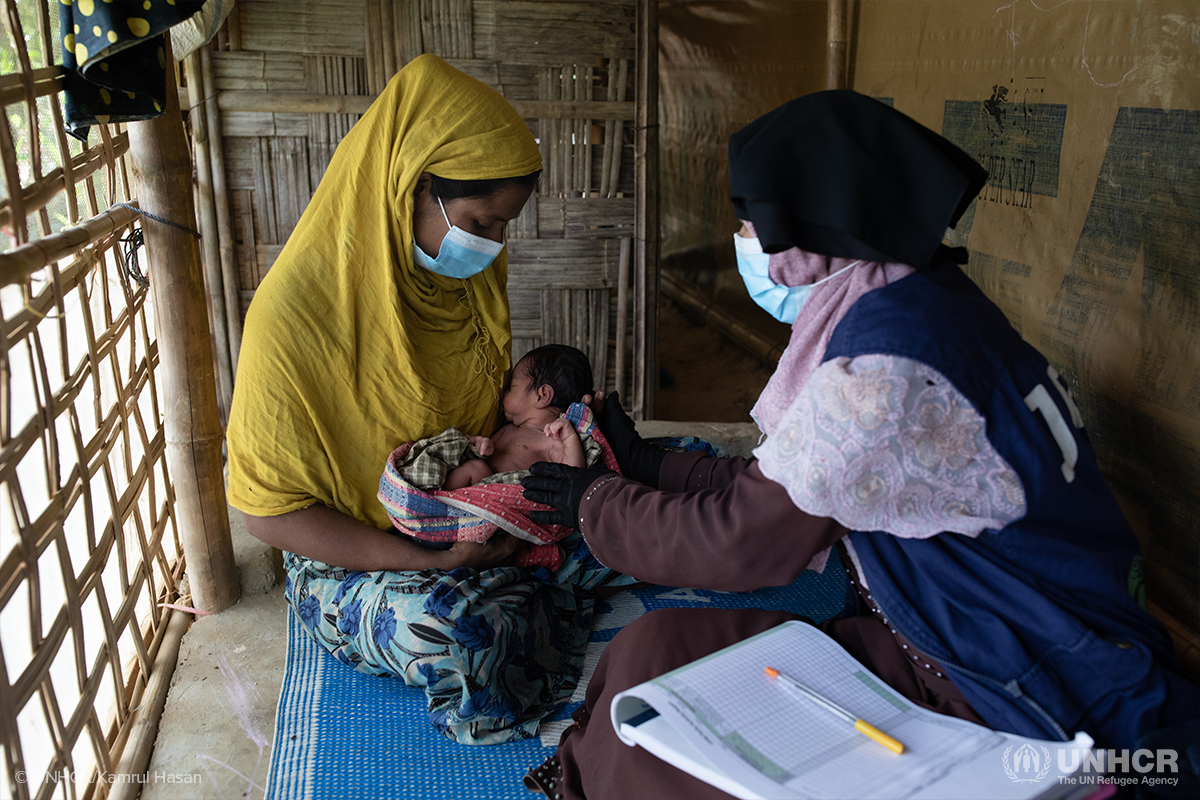 Hamida Khatun is a new mother who lives in the Kutupalong refugee camp. As she begins learning how to care for herself and her new baby, the camp’s community health volunteers are there to support her. Hamida Begum is a community health volunteer who is guiding Hamida Khatun through the early days of postpartum by giving her advice on diet, hygiene, breastfeeding and postnatal care.

There are more than 300 community health volunteers in Cox’s Bazar, the majority of whom are Rohingya refugees. UNHCR provides training for these volunteers so they can provide health education and resources to the community, which helps slow the spread of disease and raise awareness about specific health concerns, such as the care of newborns. These volunteers also help members of the community get referrals for the care they need from specialists and facilitate the 24/7 ambulance service for refugees in need of critical care. 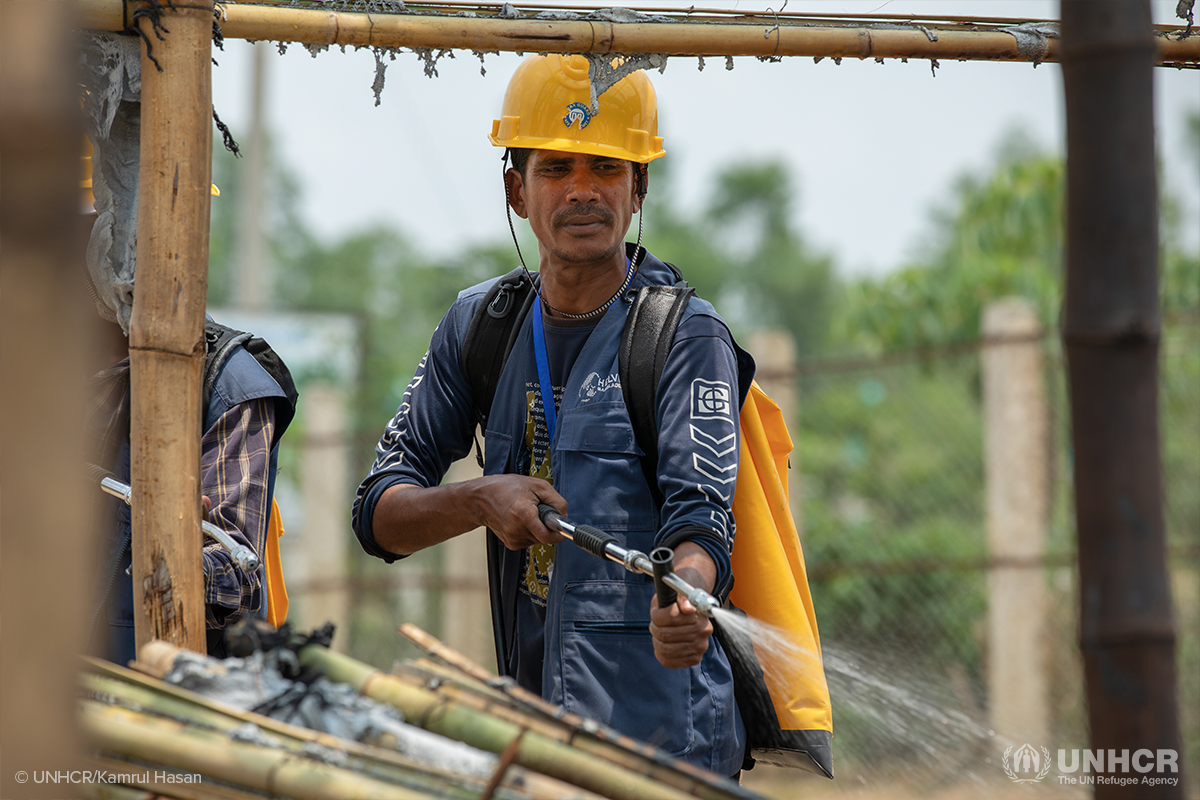 From December to April, the Cox’s Bazar region experiences very little rainfall. During this time, Rohingya refugee camps are especially vulnerable to massive fires. In 2021 alone, 150 fires were reported in Rohingya refugee camps —the most devastating of which burned down 10,000 shelters and killed 15 people.

To help prevent future tragedies in the camp, UNHCR launched a fire safety training program. Currently, the program has trained 100 volunteers in each camp on fire safety and prevention methods. Volunteers are trained to use equipment such as extinguishers, backpack containers that hold and spray water, sand and three-wheeled fire trucks. 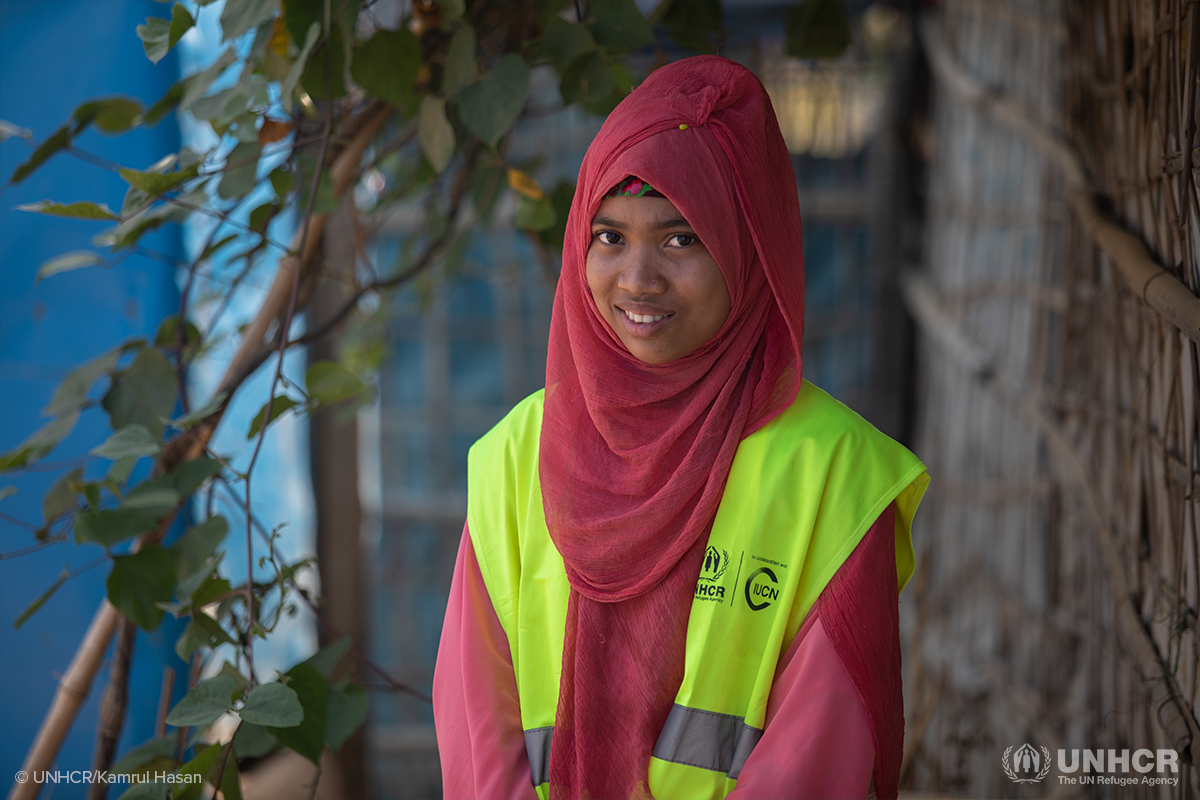 With nearly one million Rohingya refugees living in the Cox’s Bazar region  today, there are many concerns about the impact refugee camps have on the environment and the surrounding host community. Ensuring that the camps are sustainable also ensures that the refugees living in them can stay safe for as long as they need refuge.

Samiya, a 14-year-old Rohingya refugee, is a youth environmental sustainability volunteer in Kutupalong refugee camp. She and other volunteers work together to educate their communities about the importance of preserving wildlife, waste management and developing sustainable solutions for farming.

“Recently, there was a big snake in our block,” says Samiya. “Some people wanted to kill it, but others said, ‘We don’t need to, we can take it to the forest and release it.’ So they put it in a jute bag and carried it there.” 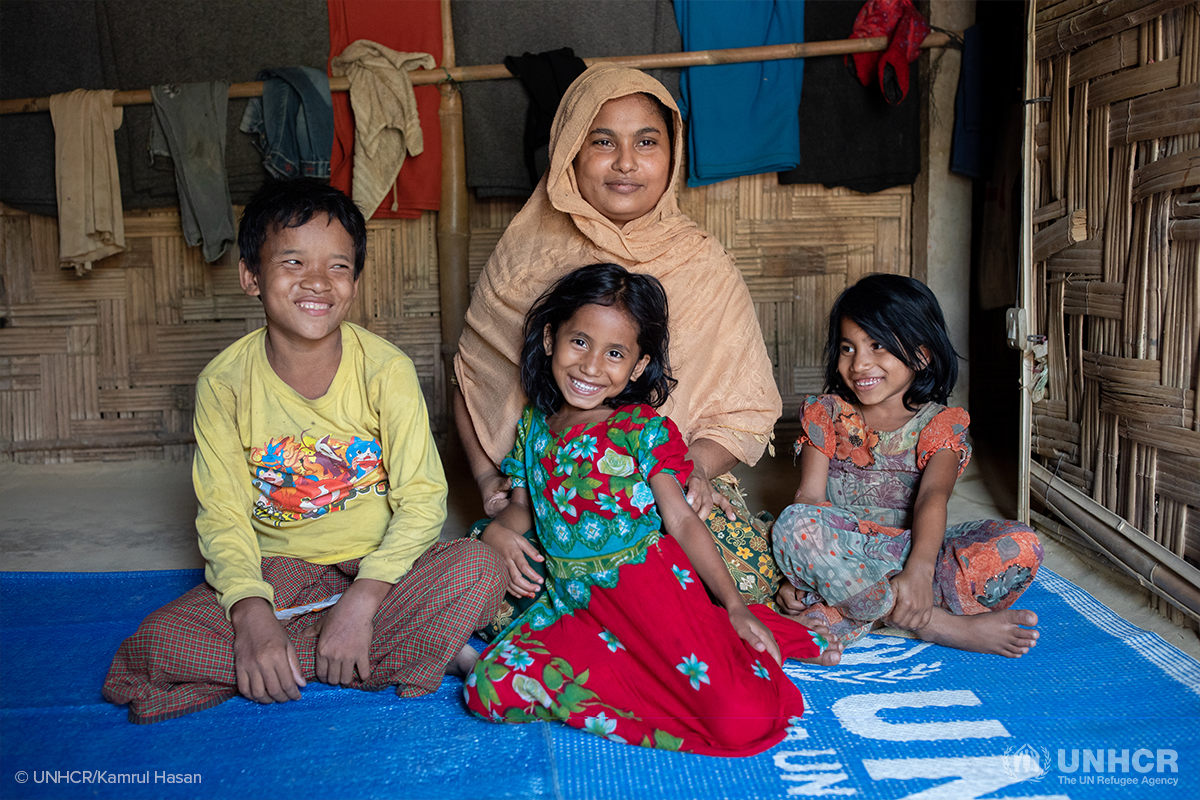 The jute bag Samiya mentions is made by refugees like Hussein Banu, a 32-year-old mother of three. When her family was forced to flee, she lost contact with her husband. She has been the sole provider for her family for the last five years.

UNHCR provides women like Hussein Banu with the opportunity to develop their skills and build livelihoods. Hussein Banu works in a jute factory in the camp with other refugee women, where they create jute bags used by environmental sustainability volunteers and other individuals throughout the camp. Through this opportunity, they not only support their community but also earn a wage to provide for their families.

“I have to take care of my children and provide for them,” she said.

Many Rohingya refugees want to return to their homes in Myanmar, but it is unclear if or when that will be possible. Until the day they can safely return home, it is critical that Rohingya refugees have the support they need to rebuild and safely prepare for the future. As a compassionate supporter of USA for UNHCR, your monthly donation will help support incredible programs like these to ensure that Rohingya refugees can live peacefully.