YIDA, South Sudan July 21 (UNHCR) – Bar code technology more commonly seen in supermarkets is enabling the UN refugee agency to greatly improve the speed at which monthly rations of food and relief items are distributed to refugees living in camps in South Sudan. 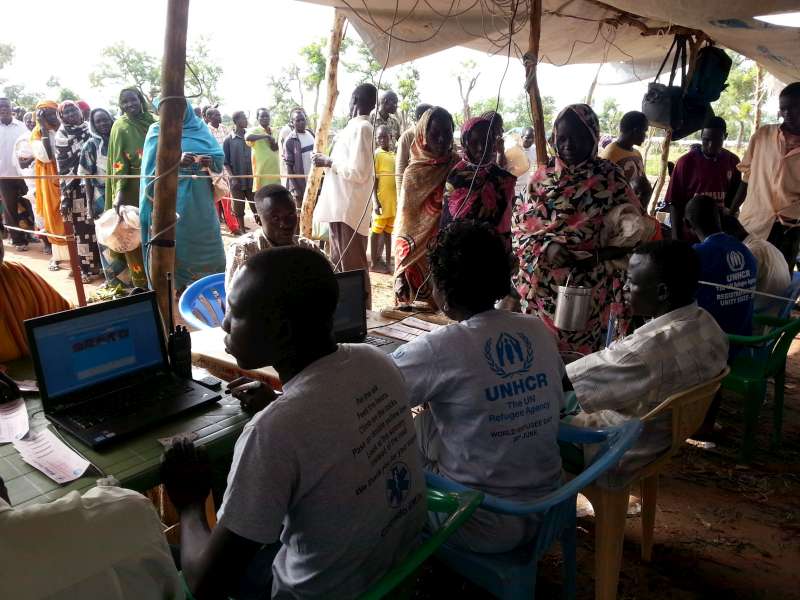 UNHCR staff at the Yida camp in South Sudan work on the monthly distribution of food rations for refugees. A new toll has cut the time it takes to complete the process from 10 days to four. ©UNHCR/S.Cansizoglu

During the distribution process, family members present their ration cards to staff who then scan it and retrieve photographs and registration information on all of the individuals associated with the card. Previously, staff had to refer to a printed list of all families living in the camp, a lengthy process and one which inevitably led to mistakes. At the Yida settlement in northern South Sudan, which is home to more than 70,000 refugees, the bar code tool has allowed UNHCR to cut the time it takes to complete the distribution from 10 days to four.

The technology also reduces the risk of fraud. By being able to see the registration information and photographs of all of the family members listed on the card, staff can ensure than the rations only go to their rightful recipients, making it much more difficult for the cards to be used by individuals who are not registered with UNHCR. The technology also quickly generates valuable data on how many people are receiving the rations, their age, gender and other biometrics. If a card is determined to be invalid, its owner has the opportunity to argue his or her case at a desk set up to arbitrate disputes within the distribution center.

Recently, the World Food Programme (WFP) requested that the tool be modified so that it could be used for the organization's milling voucher project, which allows refugees to access local services to mill the sorghum they receive as part of their monthly food rations.

Tunzaw Oo, an Associate Registration Officer with the UN refugee agency, developed the rapid food distribution tool and said it was designed to improve efficiency and accountability. "The simple technology that we are using allows us to make the monthly distribution of rations easier for the refugees and for UNHCR and our partners," he said. "It saves time and manpower and allows us to reduce fraud resulting from lost or stolen ration cards."

The same bar code system is also being used by another UNHCR partner, Samaritan's Purse, in its supplementary feeding program to combat malnutrition among children and women who are pregnant or nursing new-borns. Malnutrition levels are entered into the data-base facilitating monitoring and follow-up.

Jabralla, a refugee who fled South Kordofan state in neighbouring Sudan in June 2011 with his family appreciates the more streamlined process for the distributions. "The bar-codes have cut the time we need to wait in order receive our assistance, so it no longer takes days as it did before," he said.

The tool is also being used in the Ajuong Thok camp, which is located about 90 kilometres from Yida, which currently hosts about 3,000 refugees.

The UNHCR team in Yida is also examining the possibility of installing wireless internet technology in the camp that would link two distributions sites and allow data to be entered and accessed from different locations.

These advances would be unremarkable in most cities, but in a remote and harsh environment without electricity or a phone network, the technologies being put in place in South Sudan represent innovative approaches to assisting and protecting refugees.