Democratic Republic of the Congo

NYAKABANDE, Uganda, March 7 (UNHCR) – Less than two years ago, 16-year-old Florence* was a secondary school student with ambition. That was a rare thing in the lawless and dangerous Masisi region where she and her family lived in the eastern Democratic Republic of the Congo (DRC). 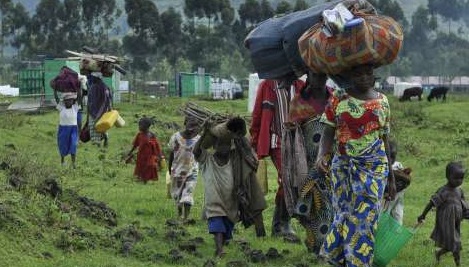 Three Congolese women lead a group of refugees after their arrival at the Nyakabande Transit Centre in Uganda. Last year, 325 cases of sexual and gender-based violence were reported to UNHCR at the transit centre, with more than 300 of the assaults committed in the DRC. © UNHCR/L.Beck

Then it all went horribly wrong. On her way to work in the family's vegetable field after a day at school, she was attacked and raped by a man in uniform as her younger siblings ran home to raise the alarm. She was tested for HIV, but her joy at proving negative was short-lived when she was told that she was pregnant.

"I lost hope when I was told that I was pregnant with a man I didn't know and at such a young age when I was still studying," the teenager told UNHCR in the Nyakabande Transit Centre in south-west Uganda's Kisoro district, where the refugee agency provides shelter, aid and protection to Congolese fleeing across the nearby border with DRC's North Kivu province.

Aside from the trauma of being raped, Florence also faced stigma and persecution from her peers and neighbours after giving birth. UNHCR and its partners have helped her by referring Florence to partners and services that provide special medical and psychosocial treatment.

But the appalling reality is that the young woman is among tens of thousands of people, mostly female but including males, who have suffered sexual and gender-based violence during the recurrent conflict and general lawlessness in eastern DRC, especially North Kivu province, where incidents of rape and sexual abuse remain alarmingly high.

It's a problem that UNHCR and its partners have long highlighted, and High Commissioner for Refugees António Guterres has put a priority on programs aimed at spreading awareness about sexual and gender-based violence (SGBV) and at responding to and preventing a scourge that has affected an estimated 60 million girls around the world.

In the DRC, according to a 2011 study by the American Journal of Public Health, about 1,150 women are raped daily. In North Kivu last year, according to UN figures, 2,094 cases of SGBV were registered, including 1,315 perpetrated against internally displaced people. A total of 1,146 were raped.

UNHCR staff at Nyakabande deal with scores of victims like Florence every year, most of whom were assaulted in North Kivu, where they lacked access to live-saving post-rape health services such as PEP (post-exposure prophylaxis) kits. Of the 325 SGBV cases reported in Nyakabande last year, 302 occurred in the DRC and 214 were rapes.

But although it is a very serious problem, many victims do not report cases of SGBV because of the stigma attached. "We face a real challenge with getting refugees to report SGBV incidents, especially rape and domestic abuse," said Clarisse Ntampaka, a UNHCR community services officer in southern Uganda.

She added that the agency was "having success through dialogue with refugee leaders and groups of refugees, explaining the laws of Uganda and available services and showing that by reporting these issues they can be addressed and things can change."

UNHCR, with specialist partner agencies, also provides psychological counseling to rape and other SGBV victims at the Nyakabande center, like Elodie,* another rape survivor who fled to Uganda from her home in eastern DRC after the attack.

Like Florence, she also worried about HIV, but although the test results came back negative, she was finding it difficult to come to terms with the attack by two armed men in her home. "I would rather die than go back to Congo, I hate the men there and fear them," the mother of four young children told UNHCR.

Elodie's life has been full of suffering and loss – her first husband disappeared after an attack on their village, during which she was raped for the first time; her second husband died from sickness in his native Rwanda and she was forced to go back to North Kivu.

But beneath her raw pain there is a resilience and strength that is inspiring. She still has dreams for the future despite the horrors of her past. She hopes to stay in Uganda and looks forward to being given a plot of land by the Ugandan government so she can return to farming, a trade she knows well.

Most importantly she prays that her three boys and one girl, and the unborn baby she is carrying, will go to school and build a better future far from the DRC. Education is also on Florence's mind. She was transferred by UNHCR from Nyakabande transit centre to the Rwamwanja settlement, where thousands of Congolese refugees live a relatively normal life. Her dreams seemed to have gone up in smoke, but now she can resume her education with full encouragement from UNHCR and hope for peace.

By Lucy Beck in Nayakabande, Uganda.