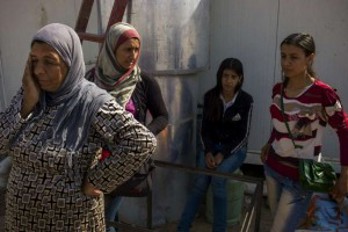 GENEVA, October 10 (UNHCR) – The UN refugee agency on Friday reported that many of the more than 170,000 people who have fled to Turkey from the besieged Syrian town of Kobane are seeking shelter in other parts of Syria or in Iraq's Kurdistani region.

"We are seeing growing numbers [of Syrian Kurds from Kobane] choosing to continue their journey," UNHCR spokesman Adrian Edwards told journalists in Geneva. "In Iraq's Kurdistan Region more than 1,600 people have sought refuge at the remote Gawilan refugee camp, some 145 kilometres from Dohuk, over the past fortnight. Between 150 and 200 Syrians have been arriving daily this week, and the trend is expected to continue in the coming days," he noted.

Edwards said most of those questioned by UNHCR reported having spent 10 to 14 days in Turkey in the area around Şanilurfa before deciding to move eastwards. "Conditions in the area have been difficult. People have contended with living in crowded mosques or in some cases on the streets without food or money. Many of the refugees were required to leave cars or livestock at the border when they entered Turkey, and decided to move to northern Iraq because they have relatives or friends there," he said.

Refugees at Gawilan camp told UNHCR of the dangers they had endured in the initial part of their journey from Syria to safety in Turkey, with several accounts of people being killed or maimed by land mines as they tried to escape the ISIS push on Kobane. To enter Iraq's Kurdistan region, people waded across small rivers. Others paid smugglers to get through the informal border crossing at Silopi, near Zakho.

The refugees also reported executions and other atrocities by ISIS fighters in recent weeks. One man said he had fled his village because prisoners were being beheaded. Another said he was held prisoner after being sentenced to death in a makeshift court set up in a school in Manbij [66 km south-west of Kobane].

He told UNHCR that some 400 prisoners were held in the school – 100 people per classroom. They were beaten with leather belts five times daily. He saw seven convicted men beheaded in front of him, and he was due to be executed on September 28, but managed to escape with others when the school was hit by bombs. This man still fears for the safety of his wife and children whose whereabouts are unknown to him.

The Syrians arriving in northern Iraq are being brought by Kurdish security forces to the Gawilan camp, which was set up a year ago to house waves of Syrian refugees, mainly from Aleppo and Qamishli. The camp is run by the Kurdistan regional government and had been hosting about 2,500 people before the latest influx.

UNHCR's Edwards said new arrivals received shelter, food and relief items. Once registered, many are leaving to join relatives in the city of Erbil or to search for work. Those without family links are staying at the camp.

"The vast majority of the new arrivals are women and children, as many men stayed behind to protect properties and defend their land," Edwards said. "UNHCR is boosting its programs to assist women and offer more psycho-social counseling, which is currently only available once a week," he added.

Some of the people from the Kobane area have been crossing back from Turkey into north-eastern Syria near Qamishli. Some 1,750 people are now staying with relatives and friends in several towns in the area in the Al Hassekah province.

"UNHCR is working with teams of outreach volunteers to identify the newly arrived displaced people and provide aid. About 40-50 people have sought shelter at the Newroz camp, which was originally set up to help Syrians affected by earlier waves of displacement and is now also hosting 3,800 Iraqi Yazidi people who fled Sinjar and surrounds in August," spokesman Edwards noted.

In Turkey, government officials say more than 172,500 Syrians fleeing Kobane and surrounds have entered the country over the last few weeks. While the vast majority of these fled in the first few days of the influx, a steady stream continues with average daily arrivals of about 570 people over the past few days through the Yumurtalik border crossing.

Many of the refugees are staying with host communities and the government and aid agencies are working with village leaders to distribute aid to refugees and host families. Other refugees are staying in various collective shelters managed by Turkish authorities, such as schools, markets, sports centers, wedding halls, mosques and various other transit shelters.