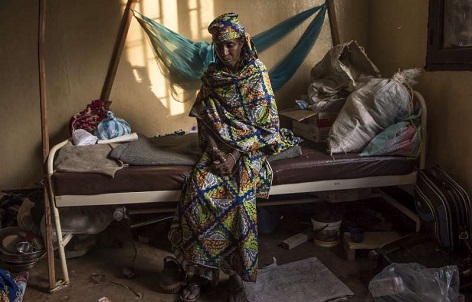 Hourriatou mourns the death of her grandson, 18-month-old Djaratou from malnutrition. Djaratou's father and twin brother were killed in the Central African Republic during their flight. The boy's mother was injured but is recovering. Hourriatou was distraught when the little boy died after reaching the safety of Cameroon.© UNHCR/F.Noy

BATOURI, Cameroon, May 22 (UNHCR) – Houriatou is distraught and in tears. She has become used to loss since her native Central African Republic exploded into violence last December, but the death of her 18-month-old grandson, Djaratou, from severe malnutrition seemed particularly cruel to her, and she can't hold back.

Houriatou finds it difficult to understand why Djaratou should have died after surviving the grueling flight and journey, when finding enough food to eat was part of the ordeal. "We walked for three months in the forest. It was terrible. We only ate leaves on the road. We walked until our feet were swollen," she recalls.

Djaratou, who weighed less than 10 pounds when he died, was but one of a growing number of children arriving across the border suffering from malnutrition – an estimated 40 percent of children under the age of five arriving at the border town of Gbiti, east of Batouri, suffer from the condition.

The boy was among 100 refugee children being treated for severe malnutrition in Batouri Hospital's nutrition center- he just lacked the strength to recover. The center receives support from UNHCR and its key medical partner, Doctor's Without Borders, but the needs are huge. There are only 12 beds, but mothers and grandmothers have brought dozens of children and more arrive every day.

Construction work has begun to increase the capacity, but to deal with the demand, UNHCR has set up tents where children can stay with their mothers. "We work day and night to help children survive" and regain their strength, says John Majaliwa, a UNHCR nutritionist who works in Batouri Hospital.

The patients also include malnourished children referred by Doctors Without Borders to Batouri Hospital from its overwhelmed health clinic in the town of Gbiti on the border with Central African Republic. Many of the 80,000 refugees in Cameroon have passed through Gbiti, about half of whom are children, including 20 percent aged under five.

There is a common theme in the tales told by grieving or concerned relatives as well as by those trying to save the lives of little ones. "They arrive in desperate conditions after several months without eating, trekking through the forest in Central African Republic," explains Majaliwa. "In some cases, entire families are malnourished," he adds, saying this is an indication of the suffering. In general, the young are less able to survive long periods of deprivation and physical hardship.

Houriatou's tale is typical. She and her family lived in the countryside, hoping the conflict would not come to them. When militiamen attacked, she fled with a large group of relatives. It was always difficult to feed such a large group. The danger of attack was constant. Baby Djaratou's father and twin brother were killed in one attack, which also left the boy injured and his mother with machete wounds.

Another refugee, 17-year-old Habsatou, says her family walked through the bush for two months after their village was attacked. "We did not eat anything except for cow milk and leaves," she says, adding that the militiamen had stolen most of their food and animals. "We would spend the entire day walking and we slept in the open air."

Her husband was killed on the journey and her two-year-old child, Adama, died in Batouri Hospital from the effects of the journey.

Others have spent even longer in the bush, eating roots and whatever else they can forage, hiding from the armed groups and trying to make their way to safety. Many die and those who do make it across are usually extremely weak and traumatized.

In eastern Cameroon every effort is made to detect those with severe malnutrition and to help the refugees help themselves. "We have to provide constant advice and help to the mothers to ensure that their children have a chance to survive. We keep an eye on the mothers to make sure they keep their children warm at night and administer treatment properly," says UNHCR's Majaliwa.

That includes milk and Plumpy'nut, a peanut-based paste for treatment of severe malnutrition. "Some children are unable to drink milk by themselves and we have to feed them through a tube [in the nose]," says Majaliwa. "The first meal of the day is at 6am and the last at 2am."

Meanwhile, although the number of refugee arrivals in Gbiti has slowed recently, UNHCR and its partners are expecting fresh arrivals when fighting across the border eases. Arrivals speak of many people still hiding in the bush – many will be children suffering from severe malnutrition and in need of help.

By Céline Schmitt in Batouri, Cameroon