What makes Lina and Manuel different from you and me? Simply their path to becoming American citizens. Born in Rwanda, Lina became a refugee in 1994 when she fled to The Democratic Republic of the Congo — only to flee to Namibia years later when a civil war broke out. During her time in Namibia, she met Manuel, also originally from The Democratic Republic of the Congo, who had fled his home because of war.

Together, Lina and Manuel found hope when they were granted refugee status to be resettled in America — an unlikely feat as only 1% of the world’s refugees ever make it to resettle in a third country. With four children in tow, the pair made their way to Pittsburgh, PA for a new life anchored in new beginnings and safety.

After resettling in the U.S. seven years ago, from a background of war and danger, the couple are now hardworking professionals with full-time jobs in healthcare. This summer, their oldest child, Victor, graduated from high school and plans to work toward a degree in chemical engineering with a minor in acting. His accent, barely decipherable, is the only give away that he was not born in the U.S. When asked where “home” is, without missing a beat he always answers “Pittsburgh.” 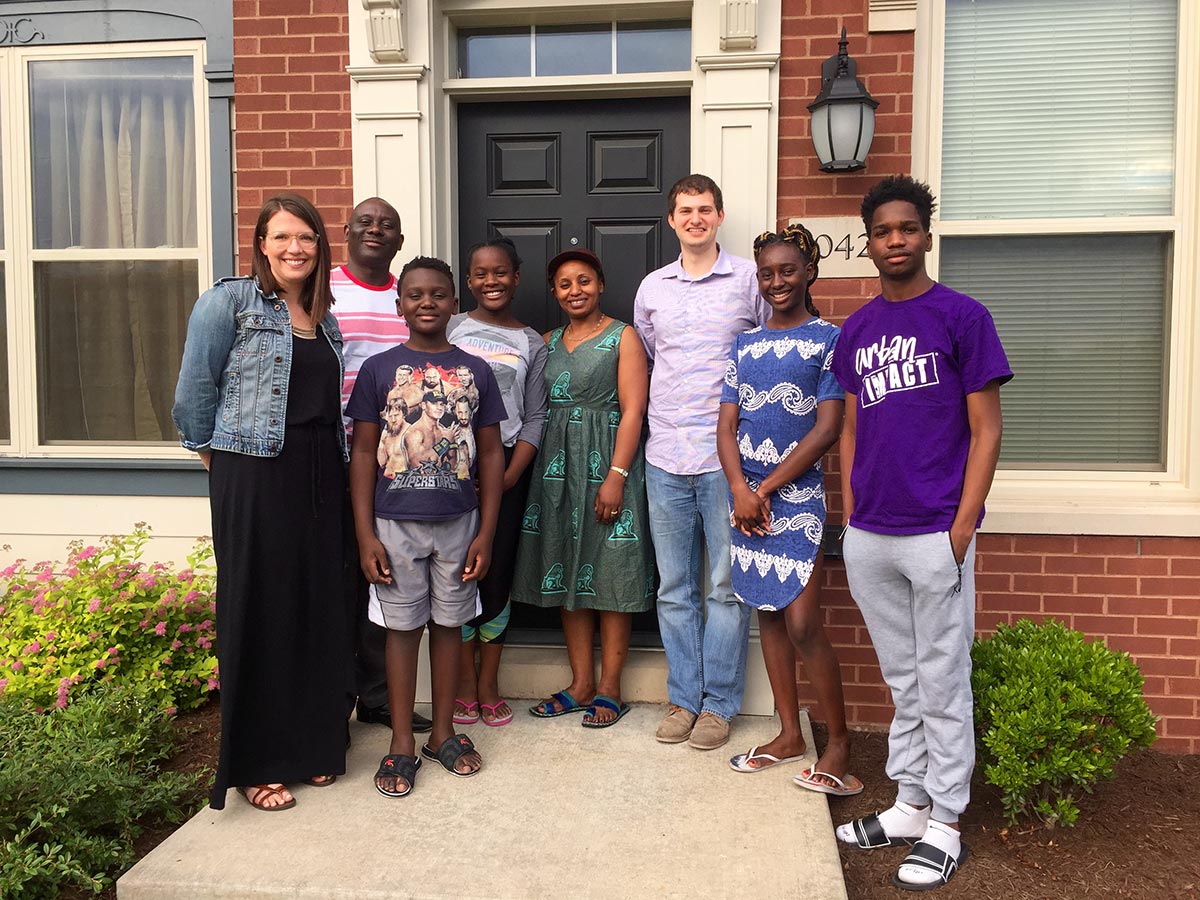 Lina and Manuel, with their children and Rachel and Brad Weaver, their Hello Neighbor mentor family, outside their Pittsburgh home.

Lina and Manuel’s story is one of new beginnings and success — what every refugee hopes for as they begin their journey to citizenship. Bolstering their success is the support of friends from Hello Neighbor, a Pittsburgh-based organization that helps refugees find mentorship, support and friendship with American neighbors.

I founded Hello Neighbor to enable these supportive and mentoring relationships. Research finds that over time, with the proper support and resources, refugees end up being valuable contributors to the economy and paying more in taxes over a 10-year period than they take from social services.

For the resilient refugees that make it to the United States, they receive three months of support from a resettlement agency and a modest amount of money per person to use toward rent and basic living expenses. Within that period, families are expected to be self-sufficient and integrated into their communities. Take a moment to imagine that: adjusting to a new language, country and culture in three months.

“Before they were refugees, they were mothers and fathers and sons and daughters. They were shop owners and construction workers and high school teachers and students and little kids playing in their front yards. Then one day everything changed.”
– Sloane Davidson, Founder of Hello Neighbor

The three-month resettlement period is a whirlwind of emotion and deadlines – from photo ID, social security number applications and ESL classes to parents applying for jobs and kids enrolling in school to health screenings and caseworkers giving lessons on public transportation options.

The key to a refugee’s success? Support after those initial three months. This is when refugees need to become integrated in their community and begin making meaningful connections.

Most refugees don’t have access to American friends. Isolation is a way of life for many. Having a friend to guide and support refugees in their new lives isn’t only based on kindness—it’s a smart economic decision as well. Every day, refugees wake up in America and live the immigrant experience of working tirelessly to give a better life to their families and children.

There is a big benefit to having a diverse set of friends, creating opportunities for inclusiveness and a sense of welcoming to cities and small towns throughout the U.S. The benefits stretch both from the refugees themselves to the community members around them.

On Victor’s graduation day, Lina said to me, “Everyone had uncles, aunts, grandparents at the graduation. We thought we would only have our immediate family. Then we joined Hello Neighbor and were partnered with a wonderful Pittsburgh couple who has since become part of our family. We invited them to join us at Victor’s graduation and then we no longer felt alone. For now we have family in Pittsburgh too! Thank you, we are so happy.”