The faces of the Rohingya refugees I met in Cox’s Bazar, Bangladesh, a year and a half ago immediately came to mind when I saw the headlines earlier this month describing a landmark report on the climate crisis: “IPCC report a code red for humanity” and “How the climate crisis is supercharging extreme weather.” I thought of Noorul, a dedicated father who works at the bamboo treatment facility, and Dhola, a grandmother, who was nervously using a liquified petroleum gas (LPG) powered cookstove for the first time.

Since 2017, when more than 700,000 Rohingya refugees were forced to flee Myanmar to Cox’s Bazar - an area exceptionally vulnerable to the impacts of climate change -  UNHCR has been working to enhance their preparedness and strengthen their resilience to environmental risk and disaster situations.

From day one of this crisis, access to reliable energy sources was a problem. During the first months, using firewood was the only option. As available sources quickly depleted, refugees like Dhola found themselves walking for hours in search of firewood. The deforestation of the camp was not only a critical environmental concern, it was also becoming a protection crisis. Longer distances traveled increased the risk of sexual and gender-based violence and kept children out of learning centers as they spent hours gathering firewood. 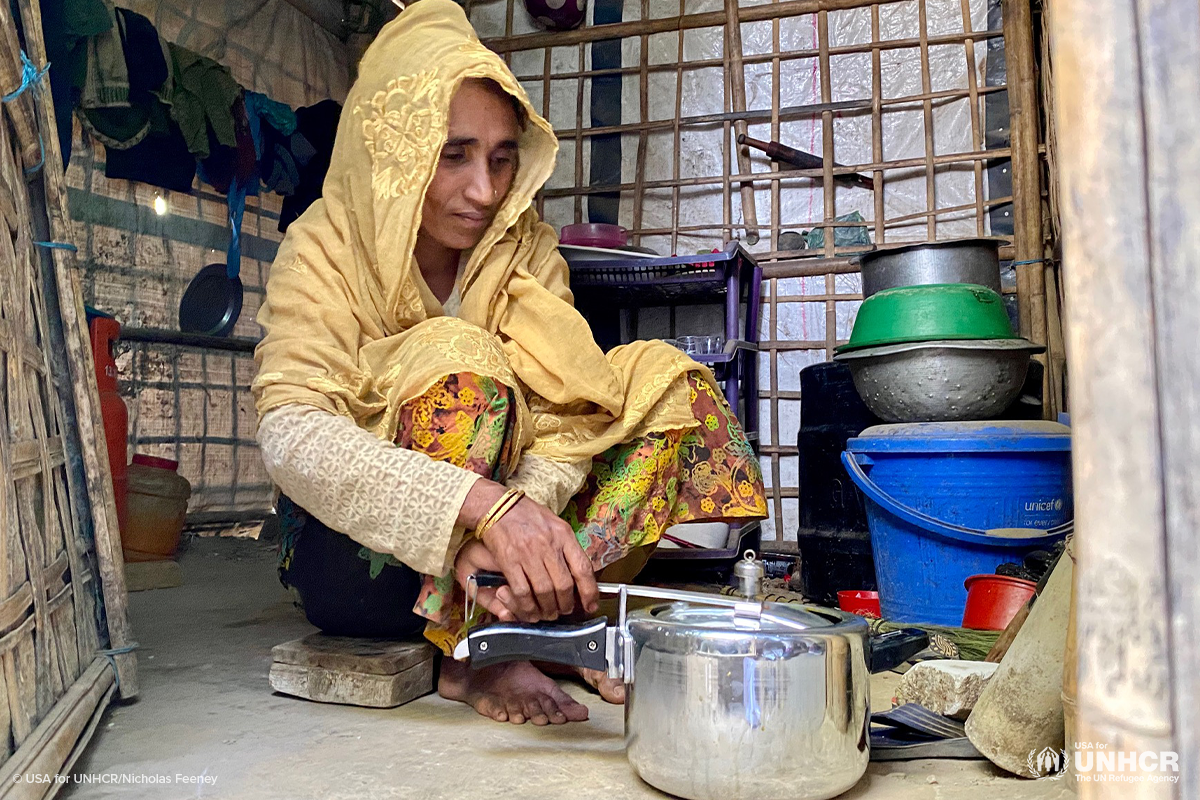 Beginning in August 2018, UNHCR, in collaboration with partners on the ground, donors and local government, spearheaded an initiative to introduce reusable LPG tanks to Rohingya refugees and members of the host community. LPG use among refugees and host community members is paying environmental dividends. Results have shown an 80 percent reduction of firewood use among refugees and a 60 percent reduction in the host community. Reduced reliance on firewood has also improved protection concerns, particularly for women and children. Furthermore, reforestation efforts have been ongoing to stabilize hillsides and reduce flooding and landslide risk in the camps.

At the bamboo treatment facility where Noorul works, bamboo poles are treated for two weeks with a boric and borax acid solution to protect the poles against insect infestation while strengthening against rain and rot. Treated bamboo poles last for approximately 10 years -- untreated poles decay in fewer than two. 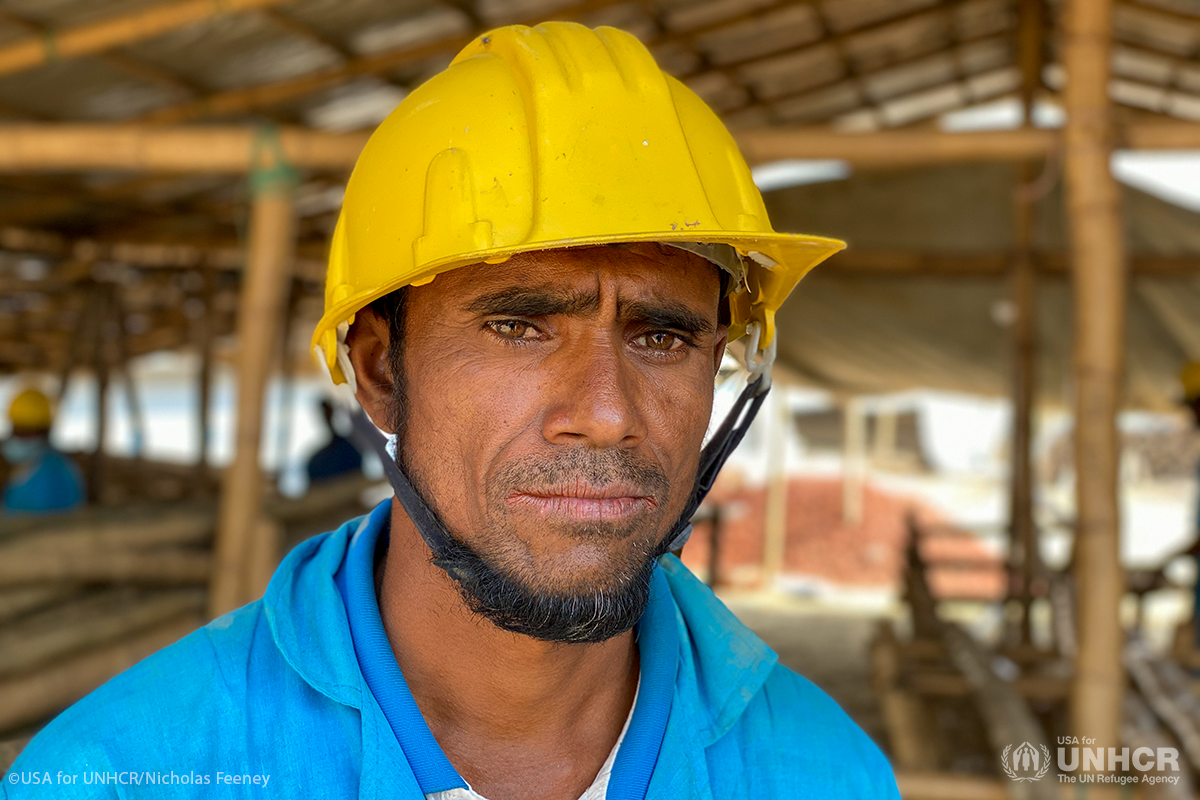 The production of quality bamboo poles is lifesaving work in preparation for Bangladesh’s monsoon season (June – October). Preparing the camp requires tens of thousands of strong and reliable bamboo poles for shelters, bridges, health clinics and education facilities. Nearly 10,000 bamboo poles are treated each month at the facility Noorul works at.

Despite all of the efforts by resilient refugees like Dhola and Noorul to create a more sustainable future for their community, it is easy to imagine how extreme weather brought on by the climate crisis could devastate the camps, which stretch across 6,000 acres and have a population density of 60,000 per square kilometer.

In fact, just two weeks before the IPCC report was published, more than 21,000 Rohingya refugees living in the sprawling refugee sites in Cox’s Bazar were affected by flash floods and landslides. Nearly 12 inches of rain fell in just 24 hours – nearly half the monthly rainfall average for July – and heavy rain continued. Six refugees were killed while thousands more had their homes washed away or flooded. Refugee and host community volunteers worked day and night to help move people to safety from flooded or collapsing shelters.

According to the IPCC report, the frequency and intensity of heavy precipitation events have increased over most land areas. This is because the warmer atmosphere is able to hold more moisture – about 7% more for each additional degree of temperature – which makes wet seasons and rainfall events wetter and tropical storms, which have always accompanied the monsoon season, more frequent and intense.

The floods followed huge fires that tore through the camps in March, killing 11 people and destroying thousands of shelters. A UNHCR statement last month said the “adverse weather, latest landslides and floods further exacerbate the suffering and massive humanitarian needs of the Rohingya refugees in Bangladesh.”

And Bangladesh is not the only area of concern. ​​In 2019, weather-related hazards triggered some 24.9 million displacements in 140 countries. Research shows that without ambitious climate action and disaster risk reduction, climate-related disasters could double the number of people requiring humanitarian assistance to over 200 million each year by 2050.

“From South Sudan, to the Sahel, to the Dry Corridor in Central America, refugees, internally displaced and stateless people are often among the first to be affected by the climate emergency.” - Filippo Grandi, the UN High Commissioner for Refugees

It’s important that we become more adept at anticipating the impact of climate change on different regions so that we can put programs in place which already address the vulnerabilities we expect to see. We should invest now rather than wait for people to become so vulnerable they have to move.

With the Rohingya refugee crisis in its fourth year, Bangladesh needs robust and sustained international support to ensure the safety and wellbeing of stateless Rohingya refugees. This must not become a forgotten crisis. Both Rohingya refugees and Bangladesh, having generously hosted them for decades, must see the world standing with them.

UNHCR is on the ground providing lifesaving humanitarian support to hundreds of thousands of Rohingya refugees. However, they need your help. Becoming a monthly donor is the most efficient and effective way to help those fleeing conflict. Make a difference in the lives of refugees by becoming USA for UNHCR’s newest monthly donor.