“I hope the focus on Afghanistan will continue. UNHCR is here for the long run.”

UNHCR’s Representative in Afghanistan, Caroline Van Buren, describes the current situation in the country and how our staff and partners are helping displaced people. 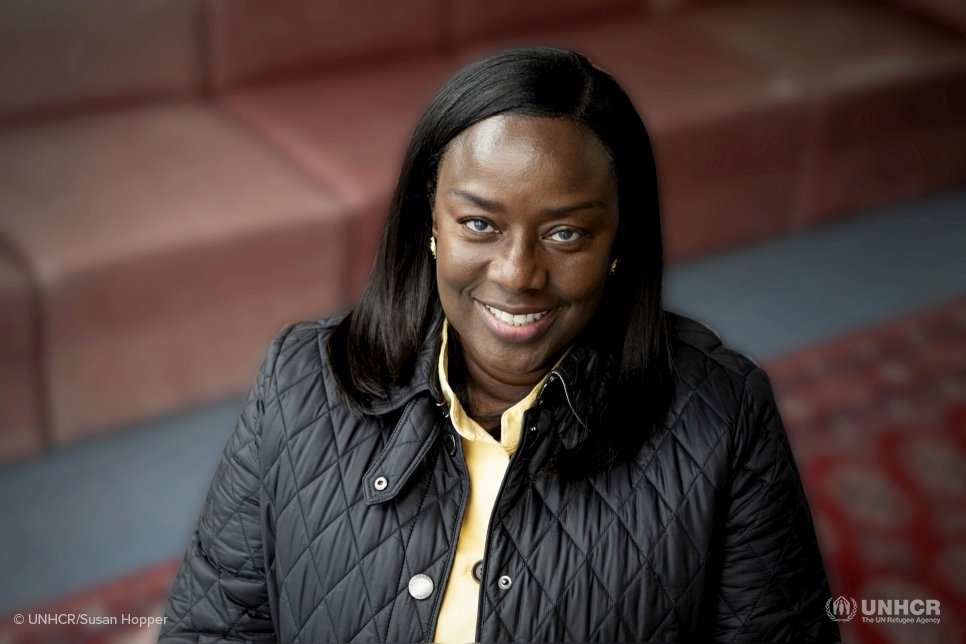 The past week has been an extremely turbulent one for Afghanistan, but UNHCR staff and partners remain in the country, delivering aid and protection to many of the country’s 3.3 million internally displaced people, including over half a million forced to flee their homes since the start of this year. Representative to Afghanistan for UNHCR, Caroline Van Buren, explains how her colleagues are adapting and responding to the humanitarian crisis wherever they can safely do so.

What is the situation in Kabul at the moment? And how are you and your staff feeling?

Currently, the situation is relatively calm. Skirmishes continue in some areas, and we still hear some sporadic gunfire, but less than in the first couple of days. The situation is slowly going back to some kind of normality.

We don’t know what the future holds, what’s going to happen, we don’t know when a government will be in place. So, we’re taking it day-by-day and hoping for the best.

We are okay under the circumstances. Speaking to staff, they are still confused. Some of them are scared, some of them want to return to work.

Given the security situation, to what extent are you able to provide assistance at the moment? And what kind of assistance are you providing?

We have access in all 34 provinces, in 299 out of 450 districts. It might be okay in one area and not okay in another area, so it’s a mixed bag and we have to ensure staff safety. Up until now, the Taliban have respected our premises and our operations. But the situation is changing all the time, and we have to be cautious, not just for UNHCR and our staff, but also for our partners. We work with a lot of partners throughout the country. Most of them are national NGOs and they have more access than we do in certain areas.

We are doing the emergency response for people who have been displaced, who need lifesaving assistance immediately; people who ran away from their homes with absolutely nothing. We provide core relief items, we provide shelter, water, healthcare, sanitation, food. We also provide cash assistance where possible.

What are the most urgent needs right now, especially for people who have been recently displaced?

Definitely food, but also shelter, water, sanitation, and core relief items like plastic sheets, buckets, blankets and gas cylinders for cooking. Also, dignity kits for women and hygiene kits. Basic relief items that people need when they run away from home without being able to take anything.

When you’re going out to do those distributions, how are you ensuring the safety of staff and partners?

The Taliban is encouraging us to resume our activities; they’re saying that they’ll provide the necessary security. So, for now, in most areas we are resuming our work, but we must have the greenlight from the Taliban to do so.

To what extent are Afghans able to reach and cross borders in search of safety?

Most borders are closed. The only place where people can move in and out currently is at Spin Boldak – that’s the border with Pakistan – where we have business as usual. Over the last couple of days, 20,000 people [have come] out, 19,000 people [have come] in. These are not necessarily asylum-seekers; this is a very busy border and these are the numbers that we have regularly. We have people who go to Pakistan for medical care, we have people who go for school, for work, to be with their families. And we have the same number of people coming into Afghanistan. For Spin Boldak, you exit through Kandahar, and our colleagues and our partners are saying there is free movement. There are checkpoints, but there are no major issues.

Other border points, for instance the border points with Iran – you need a travel document and a visa. This is why some people are using smugglers to move through irregular border points.

The borders with Tajikstan, Uzbekistan and Turkmenistan are closed for the movement of people and other borders are only open for commercial traffic such as trucks bringing supplies.

There’s been a lot of focus on evacuations from Kabul airport and offers of resettlement from various countries. For those who don’t know, please can you explain the difference between evacuations and resettlement and UNHCR’s different role in those two processes?

Different countries are evacuating their citizens, their permanent residents, as well as Afghans who worked for them. UNHCR is not involved right now. When it comes to resettlement is when we become involved, but we only do resettlement from the country of asylum. So, an Afghan citizen would have to leave the country of origin, go to a country of asylum and then, if there are no solutions in the country of asylum, then we look for a third country, and this is what we call resettlement. It’s a lengthy process that involves a number of interviews and checks and, unfortunately, it is only available to a very small proportion of the most vulnerable refugees.

Which population groups are you most concerned about right now?

Journalists and other media professionals, people who are perceived to support the former government, people who are perceived to support international military forces and members of minority ethnic groups. For women and girls the policy is not yet clear, it differs from area to area. In some areas, we’re being told that women should stay home and cannot work. In other areas, depending on the work they’re doing, they are allowed to work.

What can be done to help Afghans in need right now?

The first thing that we’re asking is for countries to keep their borders open so that Afghans who want to leave and seek international protection can do so.

The second thing we’d like to ask is support for people who are internally displaced – lifesaving assistance for those who had to leave their homes.

And then we also need support for “regular programming” as we call it – restoring the lives and livelihoods of people who are returning home; rehabilitation and construction of damaged infrastructure; ensuring people have livelihoods.

So, these are the three levels: first, keep the borders open, second provide emergency lifesaving assistance, and then let’s rehabilitate and construct damaged infrastructure and facilities so people can return home.

All of these things will require support from the international community and currently, our response in Afghanistan is only 43 percent funded.

I hope that the focus on Afghanistan will continue and that it will not go away after a few weeks. UNHCR is here for the long run.