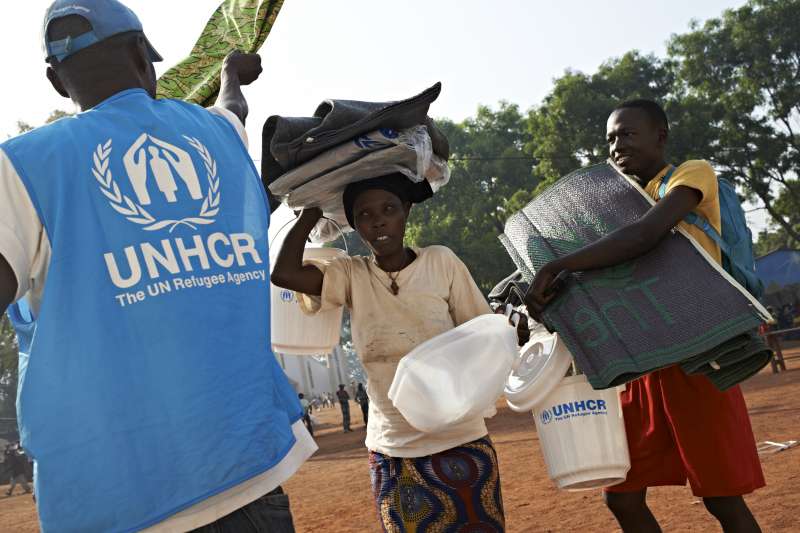 A displaced woman and her son carry UNHCR aid after a distribution in Bossangoa. ©UNHCR/S.Phelps

"Targeted attacks against civilians, looting and the presence of armed elements at some displacement sites have severely limited humanitarian agencies' access to those in need of urgent assistance," a UNHCR spokesman said.

"Our staff report that people are hiding in the bush, fearing fresh attacks. The deteriorating situation, coupled with the long distances between IDP sites outside [the capital] Bangui and poor road infrastructure, makes it increasingly difficult for UNHCR to reach people displaced by the conflict," he added.

More than 510,000 people are currently sheltering in 67 sites in Bangui, or living with host families. This represents more than half of the city's total population. Some 60 percent of those displaced are children.

UNHCR is finding access to some 45,000 of the IDPs living with host families in Bangui very difficult because of the volatile situation, which makes it difficult to assess their needs and provide assistance.

Meanwhile, the number of displaced people seeking shelter at Bangui International Airport in the past week has almost doubled – there are now some 100,000 people there. "Distribution of shelter material and other relief items has become more challenging and it is difficult to put a distribution system in place. Humanitarian agencies are working on a rapid 30-day inter-agency response for people displaced at this site," said the UNHCR spokesman.

Some 186 miles to the north of Bangui, continuing clashes have led to an increase in the IDP population at a school and at a church property.

UNHCR reiterated that improved security is essential for humanitarian workers to reach the displaced and provide vital humanitarian aid to hundreds of thousands who desperately need assistance. It also called for more troops and effective operational coordination for the African Union peace-keeping force in Central African Republic (CAR).

Despite these challenges, UNHCR and its partners continue to distribute relief items at sites where access is possible. "Since December 5th, our supplies have reached about 23,000 people from over 4,600 households," the spokesman said, adding: "We are scaling-up our presence in CAR with the arrival of our emergency teams. Fifteen additional UNHCR staff have arrived since December 14th."

The Refugee Agency also plans to establish a sub-office in Bossangoa and two small field offices in the coming weeks. UNHCR has this week organized three airlifts to Bangui of relief items, vehicles and office equipment. Three more flights are due to arrive at the weekend with stocks from regional warehouses. In all, this airlifted aid will be enough for 75,000 people.

Renewed violence has also forced several countries to repatriate their nationals. Thousands of Chadians have already been evacuated. Cameroon also flew home several hundred of its citizens last week. Senegal and Niger, meanwhile, have asked the International Organization for Migration (IOM) for help repatriating their nationals. In addition, several hundred nationals from the Democratic Republic of the Congo have expressed their desire to return home. UNHCR is working with IOM to identify refugees and asylum-seekers who wish to return home.

An inter-agency humanitarian plan for CAR was announced on December 24th. This 100-day plan will allow for immediate and rapid provision of protection and life-saving assistance. A total $152.2 million has been requested for the plan.

UNHCR is protecting and assisting more than 20,300 refugees in CAR. While the situation in the country remains tense, no incidents involving refugees have been reported yet. However, many live in fear of an attack. UNHCR is also assisting those refugees who wish to repatriate.