Hemen Jaff, a 39-year-old Iraqi refugee, is carefully studying the laser-cutting machine he operates at a technical company on the Greek island of Kos. He is making important adjustments to the design of packaging, which will be used for local wine and olive oil. His wife, Sharaban, 30, who also helps at the company, is embroidering a kitten onto a children’s t-shirt using an industrial sewing machine. Beta Jaff, the couple’s four-year-old daughter is buzzing around and singing “Twinkle Twinkle Little Star” in perfect English.

The Jaff family found work at the company just three months after arriving on the island in a rickety boat to seek asylum in June 2018. In Greece, asylum-seekers are allowed access to legal employment, if they can find a job, which is often an insurmountable obstacle, especially for recent arrivals.

Hemen, who was a civil engineer in Iraq, set out to find a job as soon as the family arrived on the island.  He wanted to provide for his family and not to depend solely on humanitarian aid.

“I was wandering the streets of Kos’s center, when I heard noise from some machines. I entered the company and told the owner that I can do everything, from cleaning the tiles on the floors to operating the machines. He believed in me and hired me,” Hemen says. Soon Sharaban began helping out at the office and learning how the different machines work. She has been offered to be hired by the company as an employee from May 2019. 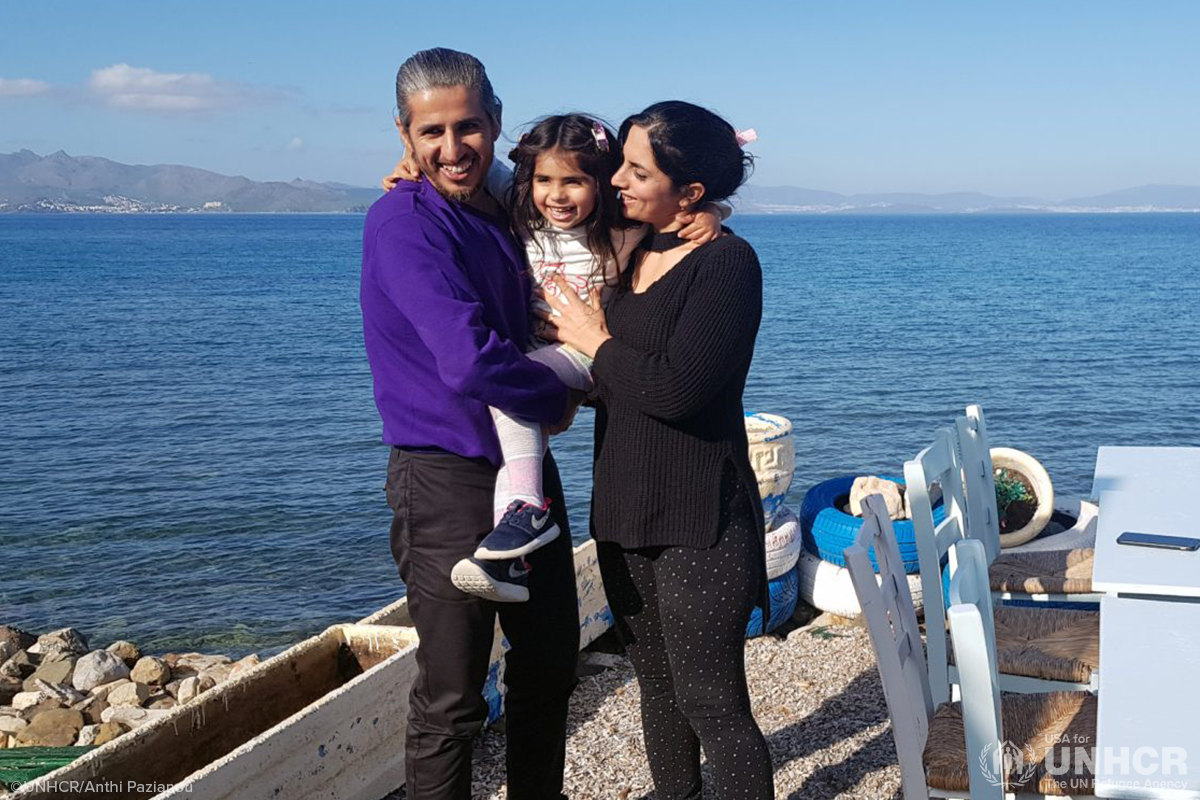 Initially the Jaffs were accommodated in a container home at the government-run Pyli reception center. Soon after, UNHCR’s partner NGO ARSIS – Association for the Social Support of Youth accommodated the Jaffs in an apartment under the EC-funded ESTIA program. On Kos, nearly 190 asylum-seekers, the most vulnerable, of the 1,000 have access to such apartments, with the program providing over 25,000 places across the country as part of UNHCR’s support to Greece’s reception capacity.

With his first salary, Hemen found an apartment to rent and handed over the keys of the ESTIA flat to the Arsis social workers, after he had made sure to clean it first.

“Since I was able to find a job and make a living, I considered it wrong to continue to benefit from an apartment that could be used by another family that might need it more,” Hemen says. “The time had come for us to become independent.”

As recently as last spring, the Kurdish family was living in what they call a “big house” in Iraq, leading a comfortable life. Today, the Jaffs rent an apartment with two small rooms. But they don’t mind. “Today we have control of our life; and this is more important,” says Sharaban. Little Beta complements her mother, saying their house had been “huge, but boring.”

Back in Iraq, Hemen worked as a civil engineer and in just a few years, became successful in his field. Hemen and Sharaban married in 2012 and the family lived safely until they were targeted by extremists and forced to flee last year.

“We took to hiding in various cities, but we could not do this forever. We decided to flee to a place where we could feel safe,” Hemen says.

After fleeing from Iraq to Turkey, the family paid smugglers to take them to Greece via the sea. The boat trip from Bodrum to Kos during a night in early June 2018 took less than an hour, but was terrifying for the family.

“We had never seen the sea before,” says Heman. Beta said to her father that she was scared and he held her tightly in his arms. “I told her to close her eyes and thankfully she fell asleep.”

Safe on Kos, Beta is preparing excitedly for kindergarten which will start in September. For now, she is focused on singing, dancing and improving her already impressive English language skills with the help of a laptop provided by the company manager. She has inherited her father’s flair for languages — he speaks five — and is looking forward to learning Greek and making new friends.

Hemen, who is passionate about Economics, spends his free time learning about stock markets. His wife is drawing up plans to one day open a gym on Kos and to watch their daughter, Beta, grow up happy, free, and safe.

“In the past I used to say that if you uproot a tree from your country and try to plant it elsewhere, it will not flourish. I have changed my mind. My tree is growing strong on Kos and I am delighted about this”, says Hemen.