LA Lakers’ Wenyen Gabriel visits homeland of South Sudan with UNHCR, to ‘speak up for refugees and displaced people everywhere’ 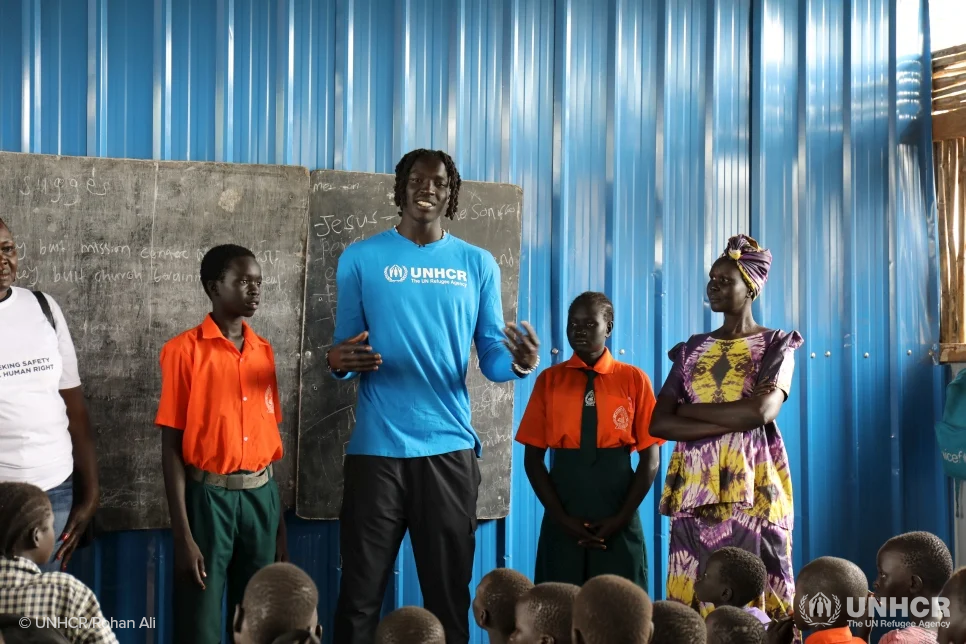 “I want people to know about South Sudan. I always wanted to go back, and I am happy I’ve made it here.”

LA Lakers’ Power Forward and former refugee Wenyen Gabriel is in South Sudan this week, visiting his homeland for the first time since being resettled to the US at a young age. During his visit with UNHCR, the UN Refugee Agency, Gabriel met with families and individuals displaced due to floods and by conflict in the region.

Gabriel was born in Sudan’s capital Khartoum in 1997 after his parents fled the civil war in the south. The NBA player said: “I am here in South Sudan for the first time since my family fled the country. We were resettled to the US as refugees with the support of UNHCR. My experience makes me want to speak up for refugees and displaced people everywhere and help make a difference.”

Wenyen began playing basketball at a young age and currently plays for the LA Lakers, one of the most successful teams in the history of the NBA. Now 25 years old, Wenyen is keen to support the work of UNHCR and harness the power of sport to help those forced to flee to build a better future.

Gabriel said: “I want people to know about South Sudan. I always wanted to go back, and I am happy I’ve made it here. I’ve organized a basketball camp this week for children, including 21 displaced children. I visited camps with UNHCR, seeing with my own eyes the importance of helping people who’ve been forced to flee their homes, though there is a major shortage of funds for life-saving assistance. The world shouldn’t forget about South Sudan.”

Welcoming Gabriel in South Sudan, Arafat Jamal, UNHCR’s Representative said: “We’re honored to have such a dedicated, energetic and compassionate athlete with us. I am moved by his passion for giving back to his home country, and I look forward to continuing our partnership to build hope and opportunity for South Sudanese youth.”

South Sudan’s refugee crisis is the largest in Africa and it is also one of UNHCR’s most underfunded crises in the world, even though the needs are high. Millions are also internally displaced due to conflict and insecurity, as well as flooding and drought driven by climate change.

Gabriel continued: “South Sudan is a young country but it’s one with much potential. Many South Sudanese in the diaspora have been successful. We have world famous models, athletes and entrepreneurs. I want to contribute my part and help my people, including refugees and people displaced within South Sudan, through the unifying power of sports and especially basketball.”

Wenyen Gabriel started supporting UNHCR in 2020, including by amplifying key campaigns as well as by marking South Sudan’s Independence Day as a moment to gather attention for the humanitarian situation in the country.