DORO REFUGEE CAMP, South Sudan, May 12 (UNHCR) – As food shortages start to affect refugee camps in South Sudan, it is the youngest who are suffering most, like Ransom Wapi. The four-year-old's stiff gait, protruding belly and fluffy rust-coloured hair are telltale signs that he is not well. 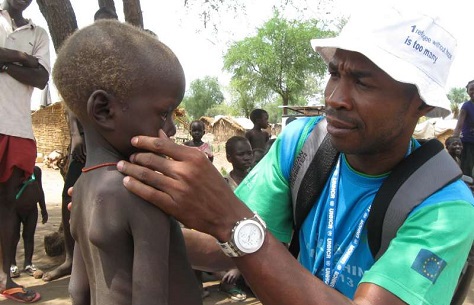 Etel Fagbohoun, a UNHCR nutrition officer, checks the condition of Ransom. The food shortages are affecting the health of the little boy and other children. UNHCR/P.Rulashe

He is one of 1,200 children diagnosed as malnourished in Doro, one of four camps housing 125,000 refugees in Maban, a county of Upper Nile state. "The ongoing food crisis does not augur well for these children," says Etel Fagbohoun, a UNHCR nutrition officer in Doro, "We cannot keep malnutrition at bay with a pipeline that only allows in a trickle of food at a time," he adds.

The flow of food and other aid has been severely affected by insecurity and fighting between South Sudan government and rebel forces along the main land access routes to this isolated area, and this in turn has led to depleted warehouse stocks and prevented normal prepositioning of food.

UNHCR and the World Food Program have called on the rival sides to give them safe access to the camps before the rains come so that they can truck in vital aid for the refugees, who have fled from conflict in neighboring Sudan since independence in 2011. The problems in getting access led to reduced food rations in March and April.

Fagbohoun, who visits children in their homes to check on their health, says the food shortages are affecting the health of many young people in Doro. Malnutrition rates in the camp have risen from 12 percent in February to more than 18 percent in March, while in the other three camps they have so far remained below the emergency threshold of 15 percent.

As the nutrition expert makes his mid-morning rounds, he spots little Ransom walking lethargically towards Fagbohoun and his UNHCR visitor as other, lively, children play nearby. The boy was recently discharged from a health program that provides malnourished children with special nutrition products and monitors them closely for progress.

"Ransom has been enrolled in the therapeutic feeding programs several times. He seems to have suffered another relapse," explains Fagbohoun. "It is likely he is not receiving proper care at home, which is not unusual." Ransom is in his grandma's care as his mother, Yassinah, has gone to the market to sell firewood collected from the bush. Fagbohoun sends a driver to fetch Yassinah, who eventually arrives looking exhausted. She is heavily pregnant with her sixth child. Her youngest child, aged one, crawls into her lap. "I have taken Ransom to all the health clinics, but he still looks like this," she says in despair. "I don't know what to do anymore."

She tells Fagbohoun that the family only eats once a day now – sorghum and lentils at around 3pm. She adds that for most of March and April, she fed her family on broth made from the bitter leaves of the lolop tree. Most refugee families have resorted to foraging for edible roots and leaves to supplement their meager rations.

Burdened with countless household chores, including cooking, fetching water and firewood, and foraging for extra food, mothers like Yassinah find it difficult to attend properly to the needs of sick children. She has five children, all aged under 10 years.

Meanwhile, without the food and nutrients his little body needs, Ransom's condition is not improving. Fagbohoun has him readmitted to the therapeutic feeding program. He will receive special nutrition supplies, and have a bi-weekly check-up to monitor his progress. In tandem, his family will receive nutrition products to mitigate the risk that they might consume Ransom's supplies.

"Food shortages are exacerbating the fragile health of children like Ransom," says Fagbohoun. "They struggle to recover, and will continue to be malnourished and diseased if we cannot ensure delivery of food aid without obstruction and delay."

Meanwhile, the first rains have arrived and the window for bringing in aid by road is almost shut. Expensive airlifts might be the only answer until the dry season returns.