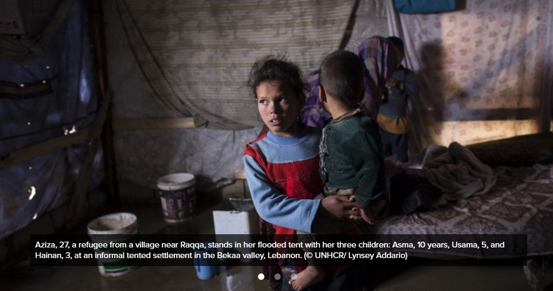 After days of relentless storms, the flimsy tent where the children live with their mother Aziza and father Farhan is flooded with dirty water. It pools under the makeshift bed — an old, sagging mattress propped on upturned pots. Aziza continually bails gray water into large buckets but her efforts are in vain.

Aziza and her children are refugees from Syria and they are not alone. There are now one million refugees registered in Lebanon alone, and the government estimates the number is actually much higher. 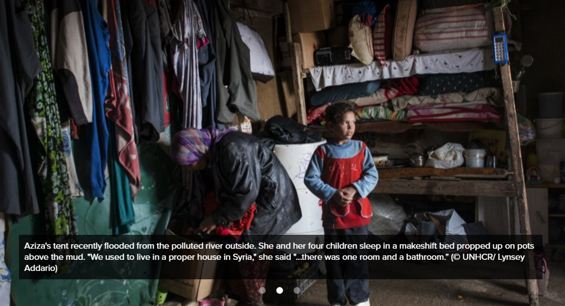 “We used to live in a proper house in Syria; there was no flooding,” she says. Aziza’s husband, Farhan, had a small piece of land where he raised crops and animals. Asma attended the local primary school and the younger boys would have joined her once of age. But when war broke out, life changed dramatically.

It is six months since Aziza and her children fled from their home in Syria.

When their small home was bombed the family crossed the mountainous border to Lebanon’s Bekaa Valley. Aziza and Farhan found relatives living in tents around an abandoned onion factory. They pay 100,000 Lebanese pounds (around $65 USD) per month to live in a tent. They cannot afford fuel to heat it. 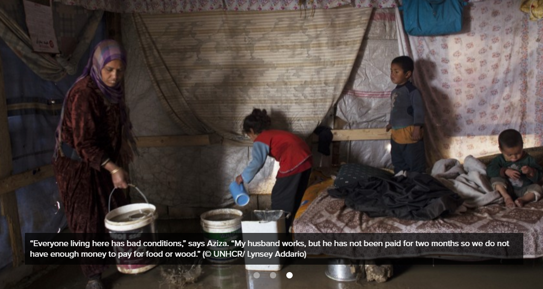 “Everyone living here has bad conditions,” says Aziza. “My husband works, but he has not been paid for two months so we do not have enough money to pay for food or wood.”

Over the winter months, with the support of people like you, UNHCR is distributing hundreds of thousands of blankets, heating stoves, and survival items to families like Aziza’s, but resources are stretched beyond the breaking point to an expected $58 million shortfall.

We are asking for — pleading for — the assistance of compassionate friends to help these displaced people make it through a cruel winter.