Amman, 30 August (UNHCR) – Even as Syrian refugees continue to flood across the border, the UN refugee agency expects next week to slash the time they need to register in Jordan from up to eight months to a single day. 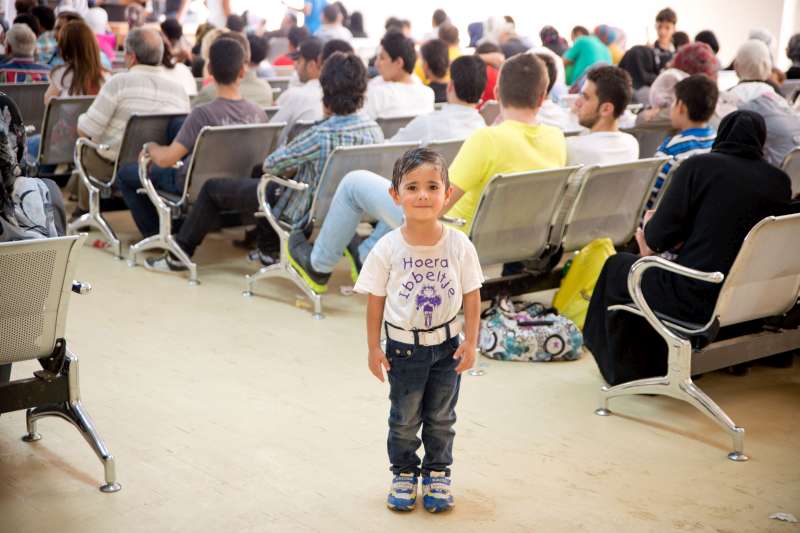 Instead of months of waiting for documents, a new facility means Syrian refugees in Jordan will be able to get fully registered in a short, single visit.   © UNHCR/J.Kohler

Provided external events do not interfere, UNHCR plans from Sunday, 1 September, for the Anmar Hmoud Registration Center to process new arrivals in a few minutes on the same day they approach the UN refugee agency. A year ago a Syrian refugee approaching UNHCR could wait six to eight months.

The center -- named after the late head of the Syrian Refugee Department of the government of Jordan to honor his work for refugees -- opened at the start of July and has double the capacity of the previous registration facilities at the UNHCR office.

Since the Moslem holy month of Ramadan ended three weeks ago UNHCR has scheduled 3,500 people a day for initial registration or renewals of documents. An additional 1,000 Syrian refugees daily were also given future appointments but that delay will now be eliminated. There are some 482,000 Syrian refugees registered in Jordan.

UNHCR expects the previous no-shows of approximately 10% of appointments to decline as word spreads of faster registration. UNHCR has already seen a noticeable increase in the number of Syrian refugees requesting appointments.

"We think it is related to the start of the school year," said Berween Younes, UNHCR officer in charge of the registration center. "They know by now that school administrations ask for the registration document."

Syrian refugees, who previously had to return after the initial registration and spent four to six hours at the UNHCR Amman office to get their final documents, now need a maximum of 50 minutes at the Anmar Hmod Center to do both.

"It's a lot more organized and efficient," says 86-year-old Amna, a refugee who has used both offices. Adding her son to her file had taken more than a year as her son's appointment was postponed three times.

The improvement has also been felt by UNHCR staff. Niveen, with 12 years experience in reception and registration, said the new site made it easier to identify vulnerable refugees who need faster service.

"You can actually see them sitting in a large hall, rather than crammed on top of each other in front of the gate," she said. "Since it is a more spacious area, we have been able to hire more staff who can talk to the refugees at the reception area to detect those that need earlier appointments."

Now it has 44 interviewers at the center, operating from 8:00 a.m. to 4:00 p.m. five days a week. Advanced technology – which carries no risks to the confidentiality of refugees – prevents double registration.

"It has become a one-stop shop, where the refugee can be referred to the different sections in the same visit. If I see that the refugee I am registering needs an assessment by community services, we can do this on the spot, rather than have the refugee go back and forth on multiple visits," said Khaled, a registration interviewer at the center.

With the problem of an efficient registration center now solved, UNHCR's must reach those who can't visit the center. In September, seven mobile teams will register those refugees at home and issue documents on the spot.

"The next step is to go even further and reach all those cases that can not approach the registration center for very good reasons – such as a physical or economic handicap," said Younes. "We will go to them."

By Reem Alsalem in Amman