GENEVA, September 3 (UNHCR) – The number of Syrians forced to seek shelter abroad since civil war began in March 2011 passed the 2 million mark on Tuesday with no sign of the outflow ending soon. 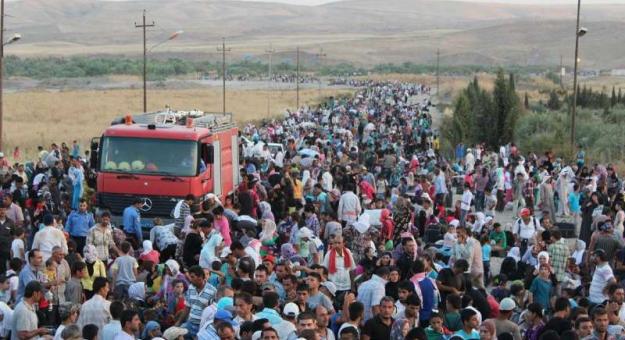 Thousands of Syrians flood across the border into Iraq recently in search of shelter. ©UNHCR/G.Gubaeva

"The war is now well into its third year and Syria is hemorrhaging women, children and men who cross borders often with little more than the clothes on their backs," the UN refugee agency said in a statement released to mark the milestone.

"This trend is nothing less than alarming, representing a jump of almost 1.8 million people in 12 months," UNHCR said. One year ago today, the number of Syrians registered as refugees or awaiting registration stood at about 230,670 people.

UN High Commissioner for Refugees António Guterres said Syria had become "a disgraceful humanitarian calamity with suffering and displacement unparalleled in recent history." He added that "the only solace is the humanity shown by the neighboring countries in welcoming and saving the lives of so many refugees."

More than 97% of Syria's refugees are hosted by countries in the immediate surrounding region, placing an overwhelming burden on their infrastructures, economies and societies. They urgently need massive international support to help deal with the crisis.

UNHCR Special Envoy Angelina Jolie, meanwhile, expressed her dismay at the level of death, damage and danger that has forced so many Syrians to run for their lives.

"The world risks being dangerously complacent about the Syrian humanitarian disaster. The tide of human suffering unleashed by the conflict has catastrophic implications. If the situation continues to deteriorate at this rate, the number of refugees will only grow, and some neighboring countries could be brought to the point of collapse," she said.

Jolie added that the world was "tragically disunited" on how to end the Syria conflict. "But there should be no disagreement over the need to alleviate human suffering, and no doubt of the world's responsibility to do more. We have to support the millions of innocent people ripped from their homes, and increase the ability of neighboring countries to cope with the influx."

With an average of almost 5,000 Syrians fleeing into neighboring countries every day, the need to significantly increase humanitarian aid and development support to host communities has reached a critical stage.

In view of the pressure the refugee exodus is placing on surrounding countries, including the worsening economic impact, ministers from Iraq, Jordan, Lebanon and Turkey will meet with UNHCR in Geneva on Wednesday in a bid to accelerate international support.

Some 52% of this population are children aged 17 years or below. UNHCR announced only days ago that the number of Syrian child refugees had exceeded 1 million.

A further 4.25 million people are displaced inside Syria, according to data from the UN's Office for the Coordination of Humanitarian Affairs (OCHA). Taken together, these numbers – amounting to more than 6 million people – mean that more Syrians are now forcibly displaced than people from any other country.

UNHCR is active in Syria and is leading the humanitarian response to the refugee crisis in each of the surrounding countries. Humanitarian agencies are worryingly under-supported, with receipt of only 47% of funds required to meet basic refugee needs.