Number of Syrian refugees triples since April to 112,000

GENEVA, July 17 (UNHCR) – The UN Refugee Agency said on Tuesday the number of Syrian refugees that it has registered or assisted in Iraq, Jordan, Lebanon and Turkey has almost tripled since April to 112,000, mostly women and children. The actual number of Syrian refugees is thought to be significantly higher, as many people seek to be registered only when they run out of resources.

In all four countries, many newly arriving Syrian refugees are dependent on humanitarian aid, with some coming with only the clothes on their backs and following many months of unemployment," UNHCR spokesman Adrian Edwards told journalists in Geneva. "The needs of those who arrived earlier in the year are also increasing as their savings have become depleted," he noted. 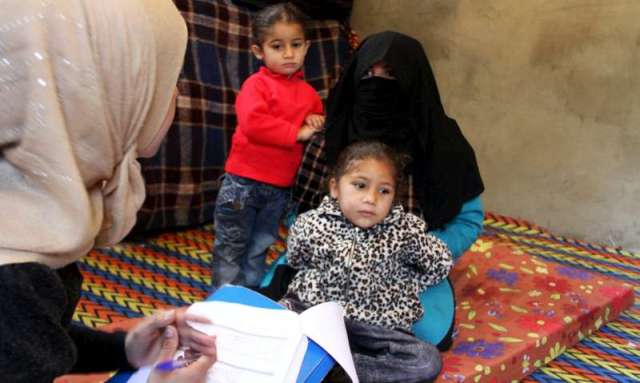 A Syrian family being registered as refugees in Halba, northern Lebanon.  © UNHCR/F.Juez

At the same time, the communities supporting the refugees are increasingly feeling the strain, with the local infrastructure and resources under severe pressure, in particular water, housing, schools and health facilities.

In Jordan, more than 33,400 Syrians are now registered with UNHCR. Almost 80 percent of them registered in the past four months. This exceeds the number of Iraqi refugees registered in Jordan (29,091).

"UNHCR welcomes a decision of the Jordan Council of Ministers to establish camps to accommodate Syrian refugees," Edwards said. He added that while UNHCR maintains that a camp situation in Jordan is the option of last resort, "the number of refugees arriving in Jordan necessitates forward planning in the event that the capacity of the host community reaches saturation point or that the numbers of new arrivals rapidly increase."

UNHCR and the Jordan Hashemite Charity Organization (JHCO) have begun establishing the camp at Za'atri in northern Jordan's Mafraq Governorate. A site for 3,000 people has been prepared, including water and sanitation facilities installed by the UN Children's Fund (UNICEF). The site has a potential capacity for around 113,000 people.

The total number of registered Syrians in Lebanon has reached some 28,100 refugees with a further 2,000 Syrians receiving assistance while waiting for registration. Security is a concern, with up to 800 Syrian refugees currently being hosted in villages in a precarious zone along the Lebanese-Syrian border.

In Iraq, the number of Syrian refugees of Kurdish origin registered with UNHCR and the Iraqi Department of Displacement and Migration in the Kurdistan Region has almost tripled since April, with more than 6,500 registered and over 1,400 awaiting registration. The camp in Domiz, close to Dohuk, is currently hosting about one third of the Syrian refugee population, with plans in development to relocate more refugees there.

According to the Turkish government, the camp population has doubled in the period from May 24 to July 16 and currently stands at around 40,000. The government has announced that two to three new sites may be established, in addition to upgrading existing sites. This will increase the country's hosting capacity by an additional 30,000 refugees.

"UNHCR is grateful that Jordan, Lebanon, Iraq, and Turkey have maintained open borders and that refugees are being welcomed," said Edwards. He added that two weeks after the launch of the Regional Response Plan for Syrian Refugees, which encompasses the needs of seven UN agencies and 36 NGO partners to support Syrian refugees, the plan (amounting to $193 million) is only 26 percent funded. UNHCR and partners warn that this low level of funding is having a profound impact on the humanitarian support being offered in Jordan, Lebanon, Iraq and Turkey.

Donate to the UN Refugee Agency today to help save the lives of refugees fleeing Syria!