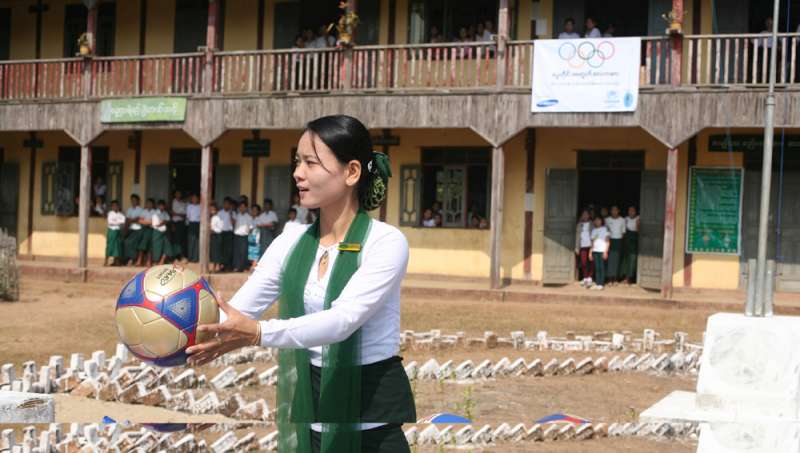 A teacher distributes footballs under the Giving is Winning programme, another sign of the rapid changes sweeping through Myanmar. © UNHCR

MAWLAMYINE, Myanmar, January 21 (UNHCR) – One team has just scored a goal and the young players are exchanging high fives. Members of the opposing team, not yet disheartened, shout to egg each other on.

The universality of sport is evident in this remote corner of South-East Asia. Scenes of children running after a ball in Ah Lu Lay, a small village near Mawlamyine in Mon state, mirror playing fields in places as far away as America, Africa and Europe. But this is no ordinary place. Years of civil conflict have ravaged this part of southeast Myanmar, displacing an estimated 230,000 people in the areas where UNHCR operates, and driving some 130,000 others into camps along Thailand's border with Myanmar.

These children are part of a remarkable story of a rapidly changing Myanmar which has embraced reforms, a market economy, and is healing old wounds through dialogue between government and ethnic groups to bring peace to the Golden Land, as Myanmar calls itself.

The country is also fresh from the euphoria of hosting the South-East Asian (SEA) Games in December after a hiatus of 44 years. The Games brought teams from neighbouring countries to compete in disciplines such as football, weightlifting and judo, as well as regionally popular sports like chinlone and sepak that involve kicking a rattan ball.

The sporting spirit is evident in Ah Lu Lay, where local youth recently received sports equipment donated by the International Olympic Committee (IOC) and Samsung through UNHCR. This is where the joint project Giving is Winning was launched in Myanmar last Thursday, paving the way for donations this month to 20 schools covering 13,000 students in Kayah, Kayin and Mon states, as well as the Tanintharyi region.

Among the guests at the hand-over ceremony last week were Sports Ministry officials also representing the Myanmar National Olympic Committee, representatives from the Ministry for the Progress of Border Areas and National Races and Development Affairs, local authorities and the headmasters of all the beneficiary schools. Two Myanmar gold medallists from the recent SEA Games were present to share their passion for sport and to encourage the youth.

"In Myanmar we have some 33 different types of sports. The ball sports are the favourites and they especially encourage team spirit," explained U Aye Lwin, deputy director of the Sport Department for Kayin state. "Our athletes try very hard to win medals and they are particularly encouraged to do so by their supporters living in the countryside, who have big expectations."

U Win Thein, headmaster of the Ah Lu Lay school, said: "We are so proud to have been selected as one of the [Giving is Winning] recipient schools. The sports equipment is greatly appreciated by the students and will help develop more interest in sport in the school."

This donation is the latest under the Giving is Winning programme managed by UNHCR and IOC since 2004. Athletes and Olympic Games participants donate sports equipment and clothing which is distributed by UNHCR to refugees, displaced and affected communities. It is a global campaign that aims to foster values such as respect, fairness and inclusiveness through sports, targeting communities affected by displacement, including host communities.

UNHCR has been working in southeast Myanmar since 2003. The current focus is on assisting internally displaced people and their host communities, as well as assessing and preparing for the potential return of refugees from Thailand.

"Our operation in the southeast focuses on assisting communities affected by disptlacement," explained Victoria Tennant, Head of the UNHCR's southeast operation in Myanmar. "From the many refugee situations I have seen around the world, sport is something that can really bring people together. It takes people's minds away from the horrendous experiences they might have gone through. Just to focus on the moment, on having fun, which for children especially, is very important."

The sports kits contain all sorts of equipment, including table tennis bats, volleyballs and footballs. They sometimes introduce new games to the youngsters. When asked what the kits might contain, a young student replies with a big hopeful smile: "Footballs!"

By Medea Savary in Mawlamyine, Myanmar