At a time when the global refugee crisis has reached a record high with more than 84 million people forcibly displaced around the world, it is more important than ever to understand what obstacles refugees face. From the moment they escape persecution and conflict, to long after they’ve found refuge in a new country, a refugee’s journey is far from over. This Oscars season, we’ve put together five must-see movies that give voice to refugees and their incredible stories of survival. 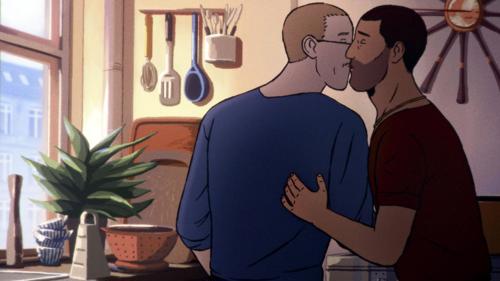 Flee, an animated docudrama directed by Jonas Poher Rasmussen about the true story of a young Afghan refugee’s escape from Afghanistan, has just made history. The dynamic film, told mostly through animation and interspersed with newsreel footage, is the first-ever to receive Oscar nominations in the documentary feature, international feature and animated-feature categories. The animation captures the painful and traumatic journeys millions of refugees take to escape conflict and find a new home.

Amin Nawabi, the Afghan refugee at the heart of the story, is asked a simple question by his friend Jonas at the beginning of the film: “What is home?” But for a refugee whose childhood began in Kabul and ended long before he reached the safe shores of Denmark, the answer is not simple. The film begins in Kabul with Amin as a young boy, just beginning to understand his sexuality in a conservative country where homosexuality “doesn’t exist.” The fighting in Afghanistan is far from Kabul at first, but as the conflict intensifies Amin is forced to flee with his sisters, mother and brother. The harrowing journey that follows their escape from Afghanistan takes them on treacherous land and sea crossings at the mercy of human traffickers and separates them across borders for years.

After 20 years of hiding his secret from his partner and close friends, Amin is finally ready to share his story of survival, a story that highlights the fear that all refugees experience after fleeing, but also the long-held hope to find a place to call home.

Watch the trailer for Flee here. 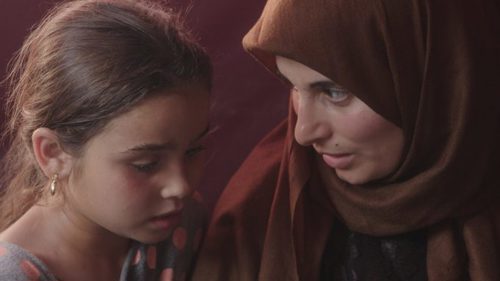 From a port in Greece, to an orphanage in Turkey, to Germany and the United States, Oscar shortlist documentary Simple As Water provides intimate vignettes into the lives of four Syrian families that have been displaced and separated by over a decade of conflict.

The documentary begins in a country thousands of Syrian refugees risk their lives to reach—Greece. Like other desperate families, Yasmin and her children escaped the civil war in Syria by boat. Although she made it to Greece, she lost her youngest son during the treacherous sea crossing and remains separated from her husband. Samra, a single mother living in Turkey struggles to make a living and considers the difficult decision of placing her children in an orphanage to give them a better life. In the U.S., Omar takes a low-paying delivery job to provide for his younger brother who is traumatized by the past.

The documentary highlights the sacrifices and risks refugees take to survive and the deep emotional bonds of family that keeps their hope alive in spite of all obstacles.

Watch the trailer for Simple As Water here. 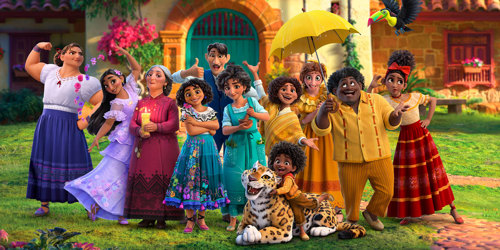 Encanto, Disney’s new Oscar-nominated hit animation, is striking a chord with Latin Americans and refugees around the world. The beautifully animated story features the Madrigal family who live in an enchanted village in Colombia. Long ago, the matriarch of the family, Abuela Alma, was forcefully displaced from her home and lost her husband Pedro while fleeing. From this tragedy came a miracle, a magic candle that creates a home for Abuela to live in and bestows upon her children and grandchildren magical gifts.

Maribel, the protagonist of the story, is the only person in her family without a magic power. But what she lacks in magical abilities, she makes up for in her love for her family. This love is what ultimately saves the Madrigals and heals the trauma Abuela experienced from losing her husband and home. The Madrigals are a powerful representation of refugees around the world who have lost everything but work hard everyday to create a better future for their families.

Watch the trailer for Encanto here. 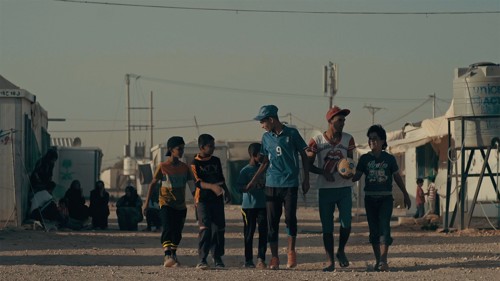 Za’atari refugee camp in Jordan is the largest Syrian refugee camp in the world, home to about 80,000 people. Ali El Arabi, the director of Captains of Za’atari, describes it as a place, “poor in opportunities, but rich in dreams.” It is in this camp that he meets two best friends, Mahmoud and Fawzi, who dream of one day becoming professional soccer players. When a sports academy comes to the camp to select players for an international tournament in Qatar, they realize it might be their only chance to make their dreams come true.

For young refugees whose lives are disrupted by conflict and displacement, it can oftentimes be difficult to dream of a brighter future. What this documentary expresses through Mahmoud and Fawzi’s determination is that all refugees’ dreams can become a reality when they’re given opportunities to succeed.

Watch the trailer for Captains of Za’atari here. 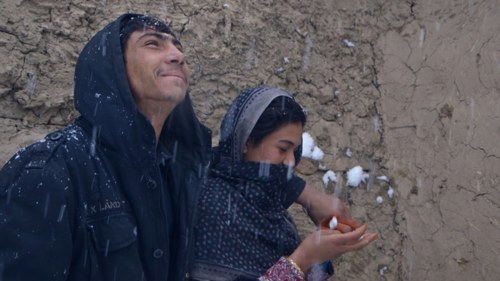 “Hope, love, and dreams.” In a country where protracted armed conflict has internally displaced 9 million people over four decades, Afghanistan is a country we don’t typically associate with these words. But for Afghan director Gulistan Mirzaei and his wife Elizabeth Mirzaei, their Oscar-nominated short documentary Three Songs for Benazir is first and foremost a story about love.

The short documentary opens with Shaista, a forcibly displaced Afghan, singing love songs in Pashto to his wife Benazir. This tender moment takes place against the backdrop of a camp for displaced Afghans in Kabul where a surveillance blimp is always present in the sky. With a wife and child on the way, Shaista must find a way to support his family. He dreams of serving his country and being the first man in his tribe and the camp to join the Afghan national army. Heartbreaking yet sweet, Shaista’s story highlights the hopes and dreams of many young Afghans that exist even after decades of conflict.

Watch the trailer for Three Songs for Benazir here.

By supporting USA For UNHCR, you can join a community of passionate supporters who uplift refugee voices. Become a donor today.