Polish border town welcomes refugees from Ukraine, but will itself need help 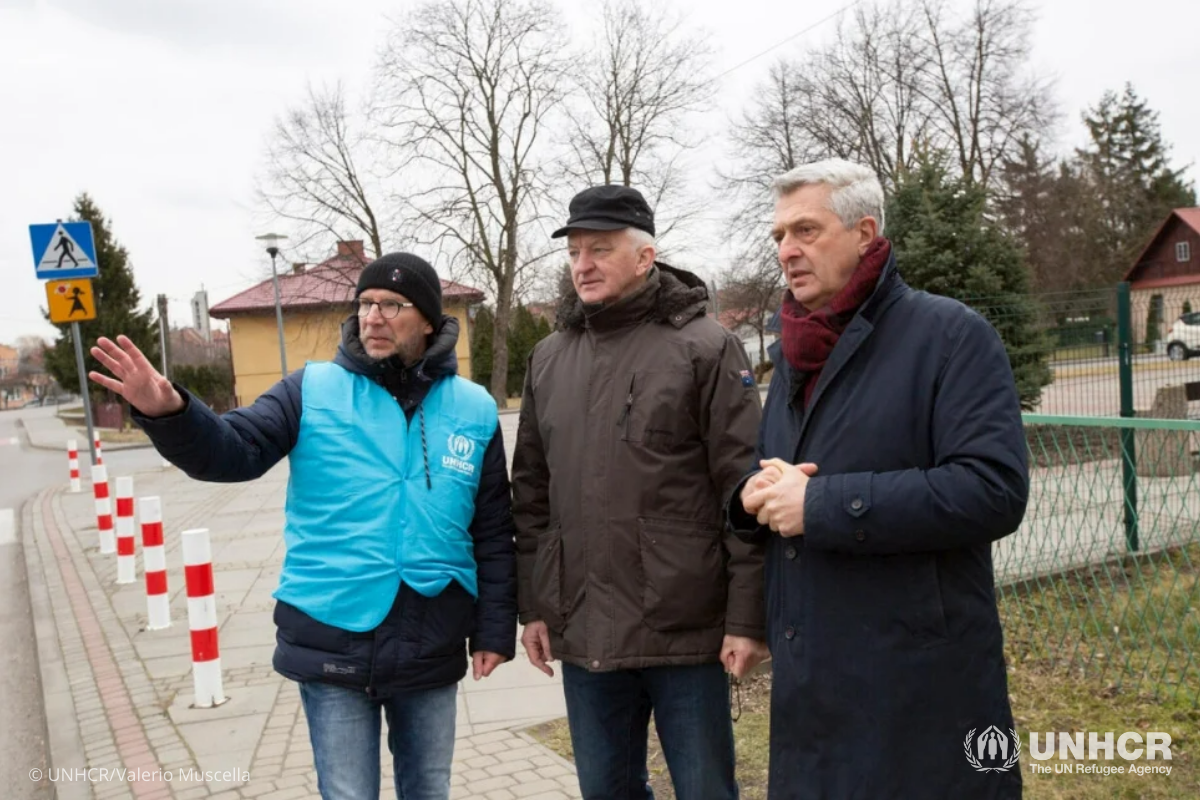 Marek Iwasieczko has been averaging just four hours sleep a night since the bombs started falling on Ukraine.

Iwasieczko, 64, has been mayor of the commune of Medyka since 2006. The town sits just over the Ukraine border in Poland, 85 kilometers west of Lviv, where an estimated 2 million people are waiting fearfully before deciding whether to escape. The town is the largest crossing point for refugees fleeing their shattered lives in Ukraine.

“Clearly we weren’t expecting this – it’s a learning curve for us,” Iwasieczko told UNHCR, the UN Refugee Agency, on a recent visit to the town’s reception center, a converted sport’s hall with a capacity of 240 beds.

“The priority is human life, making sure no one dies from cold or other needs. Indeed, last week the overnight temperature dropped to -12 Celsius here. We were lucky nobody died,” he said. “We accommodated over 700 people, who were waiting for transit buses, in every corner, to keep them warm.”

Given its modest size, the town has welcomed a disproportionately large number of the 1.8 million refugees from Ukraine who have so far crossed into Poland. Most need a place to pause, regroup and recover before moving on to other cities in Poland or beyond.

Iwasieczko sprang into action immediately, working with locals, NGOs, the police and fire-services to convert the gym into a reception center. Pets are kept in a nearby building. “We were the first to create a reception center as we are closest to the border and had the biggest flow in the first days,” he said. “The regional authorities are supporting us.”

When UNHCR visited, the center was only at around 20 percent capacity, though new arrivals tend to come at night. If the conflict shifts to western Ukraine, many more will pass through here. UNHCR has been adding staff in border regions and urban areas to help monitor arrivals, provide information to refugees on their options, advise with vetting the volunteers helping refugees and offer specialist support in child protection and legal aid.

“These refugees have lost almost everything.”

The mayor is aware that the war will leave a lasting imprint on Medyka. “These refugees have lost almost everything. We need to help them. Even if that means we’ll have to learn to live with less.”

This part of the southeast is traditionally among Poland’s less prosperous regions, but has benefitted from EU funds in the last decade. Among the investments this commune of around 6,500 people was able to make was a gymnasium – now the refugee center – a kindergarten and upgrading roads. 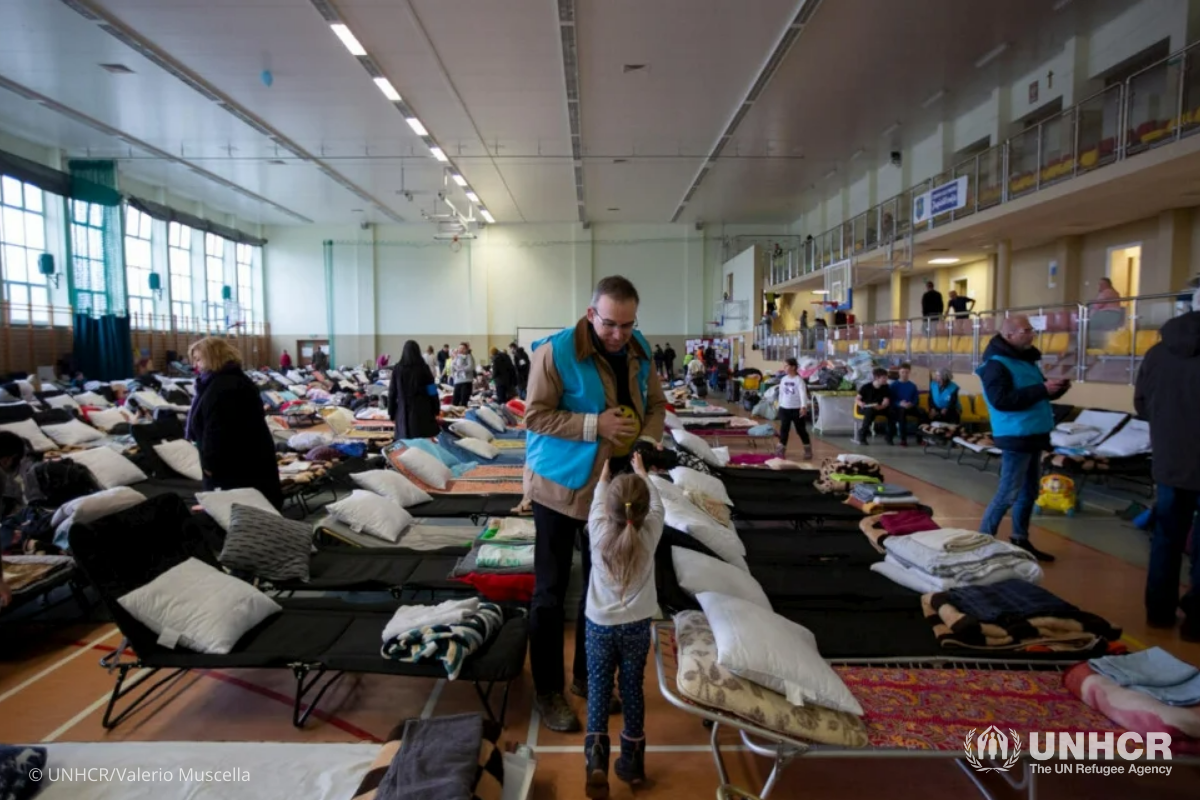 But in the last weeks, Iwasieczko has noted a degradation in local structures, with broken streetlights and damage to roads and pavements. “We had too many arrivals and the town’s infrastructure couldn’t cope,” he said. “Everyone here is fine with that. But we will need more showers, more bathrooms – initially for the refugees but later for the community. We’ll need more classrooms; the needs will grow.”

Mayors of much larger cities like Warsaw and Krakow have said they are also struggling to accommodate the volume of arrivals and are urging more towns and cities to step up.

“At this point, no one is thinking about how much it will cost, or the donations. There are immediate things to do. We hope for more support, but right now we’re focused on the refugees. The rest will come later,” Iwasieczko said.

At the center, volunteers have been bringing food, prepared in local kitchens with support from the EU and NGOs. The whole town has pitched in, preparing meals and hosting refugee families.

From further afield there are mountains of donations inside and outside the center, many useless. Some is expired food and needs to be thrown away, wasting precious time. “Of course, we received support from so many organizations but some of it was just a pile of trash,” the mayor said. “We had to spend so long sorting through it and throwing things away. It was insane.”

“We need a universal good, which is called cash,” he added. That allows him to invest in what is needed, when it is needed.

That message was echoed by Piotr, a volunteer in the center. “There’s no need for more clothes. People are coming here with half a bus [load] and we cannot take them, we are overstocked. Food in cans with long expiration is useful and it can be kept outside. There’s lots of food now but stocks run low during the week. People running away from the war need certain things: shelter and warmth, food, medicine, information, transport, internet.”

One of the center's coordinators added that trauma has become more of an issue. “Many children who arrive hide under blankets or beds, still fearing that bombs will drop,” he said. “It takes time for them to feel safe and start to play again; we have a space for children and psychologists to help. Most adults need longer to open up. That support will be needed once they are more settled.”

Meanwhile Iwasieczko, who was born a stone’s throw from the center, is having to put any thoughts of retirement to the back of his mind. “We don’t know when it will end and that’s the hardest part,” he said. “But we’ll be here as long as we are needed and can help.”