Popular surgeon turns his hand to anything at South Sudan Hospital

Dr. Evan Atar Adaha is dedicated to bringing healthcare to the neediest in a tense and volatile region of South Sudan.

Dr. Evan Atar Adaha’s title is head surgeon and medical director. He does not have an office. He does not like to sit.

He carries out up to 10 operations a day, spending hours on his feet, as well as helping nurses prepare patients and checking up on everyone, from patients with bullet wounds or malaria sufferers to newborn babies.

He is often the first in theater, pushing the heavy metal operating table into place. He can be spotted in the neonatal ward, cooing to a newborn. Recently a colleague found him standing barefoot on the operating table late one night, singing as he fixed the light overhead with homemade plaster of Paris.

“We are here to save lives, not to sit,” says Dr. Atar, who is known by his middle name. “There is no lazing around in theater. We are all equal. We are all a team.”

Dr. Atar, 52, is the senior and only surgeon at Maban Referral Hospital, a 120-bed and two-theater facility in Bunj, in the southeastern corner of South Sudan’s Upper Nile State. 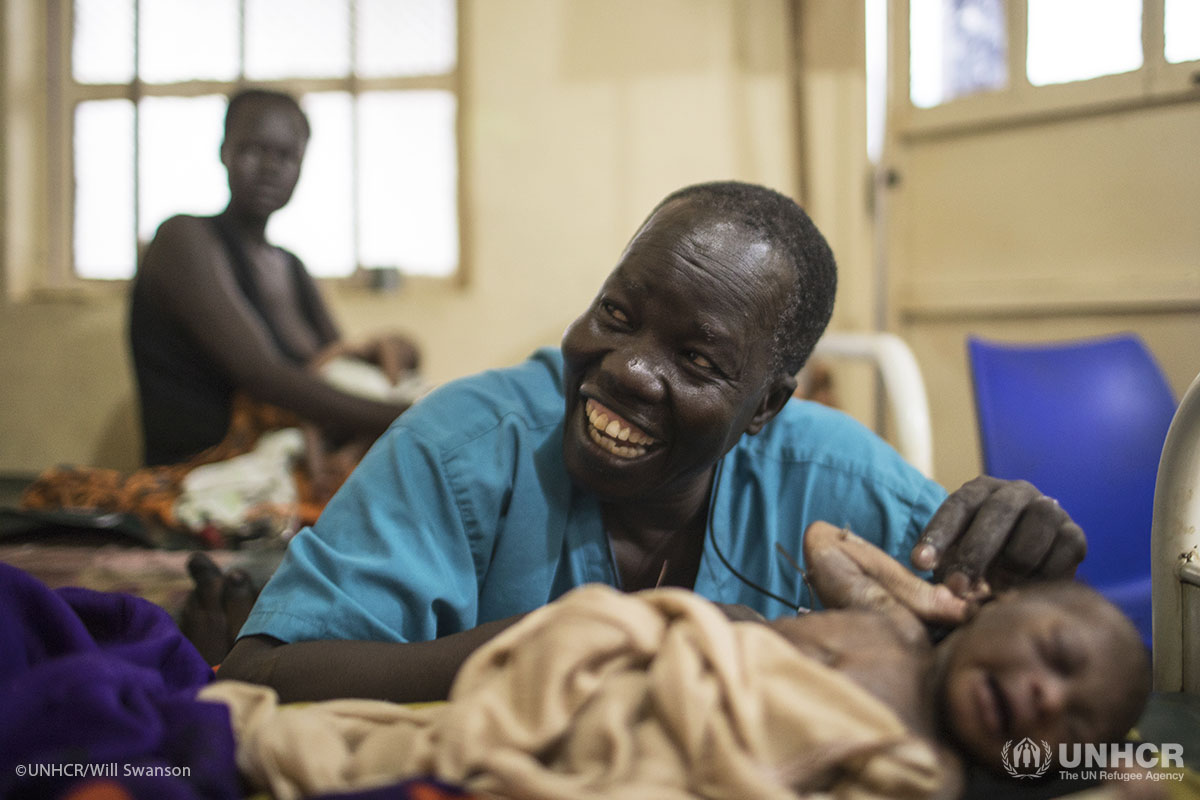 The hospital, more than 373 miles from the capital, Juba, is the only functioning surgical facility in Upper Nile and includes a neonatal section and a 20-bed tuberculosis ward.

Open 24 hours a day, it serves a population of more than 200,000. Dr. Atar is so well known that many just refer to it as “Dr. Atar’s Hospital,” and patients travel for days so they can be under his care.

“We’re the end of the line,” said Dr. Kalisa Yesero Wabibye, a doctor from Uganda who has been working at Bunj hospital for more than two years.

“This is a one-stop shop. There is no level of referral above us.”

“This is a one-stop shop. There is no level of referral above us. There are no higher specialists.”

Dr. Atar and his staff work in a difficult and dangerous environment. South Sudan suffers from a shortage of facilities and skilled health workers, and drugs and equipment are in short supply.

When South Sudan gained independence in 2011, it had about 120 doctors and 100 nurses for a population of 12 million. Since civil war erupted in December 2013, displacing more than 4 million people, healthcare has deteriorated.

In the past, medical facilities have been looted and occupied, and staff intimidated, detained, abducted and killed. Ambulances have been shot at and stolen. Since 2013, 103 humanitarian workers have been killed.

The situation in Maban County is volatile and there have been regular periods of violence in recent years. After the offices and compounds of international organizations, including UNHCR, were attacked in July 2018, Dr. Atar continued to work at his hospital even when members of his medical team were forced to leave.

Dr. Atar shrugs off the danger. “We treat everyone here, regardless of who they are,” he says, adding with a smile that all sides in the conflict seem to understand that they, too, benefit from good healthcare. 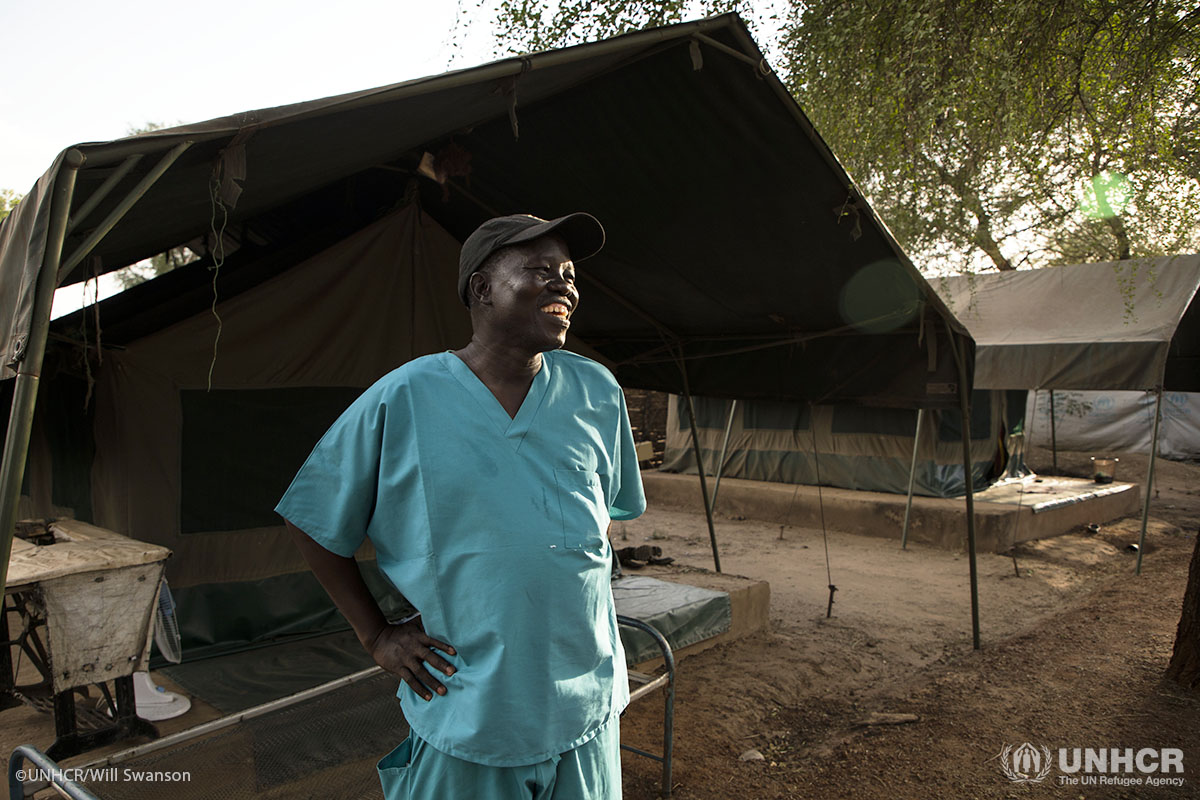 With his incurable optimism, booming laugh and at times perceptible stubbornness, he has remained single-mindedly dedicated to the cause of bringing healthcare to the neediest.

Originally from Torit, in southern South Sudan, Dr. Atar, received a scholarship to study medicine in Khartoum and later practiced in Egypt.

In 1997, he moved to Kurmuk, in Sudan’s Blue Nile State, at the heart of a major conflict where for 12 years, often during bombing raids, he ran a basic hospital treating wounded civilians as well as fighters from both sides.

“The only thing left behind was an operating table.”

“When I arrived, the hospital was a big toilet and the only thing left behind was an operating table,” he recalled.

“We used normal thread for suturing and bush sticks for blood drainage.” His most precious possession, Dr. Atar says, is an amputation set and a small sterilization kit given to him by a French doctor.

In 2011, under intense Sudanese bombing, he and his entire team joined tens of thousands of Sudanese fleeing across the border to Maban County in South Sudan. Dr. Atar packed up the hospital in four cars and a tractor. “It took us a month,” he said of the trek. “There was no road. It was the rainy season. The rivers were overflowing.”

In 2011, Maban’s main town, Bunj, was a small place with a handful of shops. The hospital was once a primary healthcare center with no operating room. To perform his first operation, Dr. Atar made an operating theater with a raised table using stacked doors.

Today, besides a host community of 53,000 people, the area around Bunj is home to 142,000 refugees from Sudan’s Blue Nile and South Kordofan regions, living in four camps. As fighting intensifies across the border, UNHCR expects a further 12,000 refugees this year.

Healthcare facilities in the camps are linked with Bunj Hospital. On average, the surgical team of four doctors operates on an average of 58 cases per week. In 2017, more than 70 percent of surgical cases were from refugee communities.

Bunj and its surrounding areas are tense and volatile. Communities fight over limited resources such as wood, farming space and grazing land.

Frequent flare-ups among political parties have led to shootouts. Relief agencies observe curfews, shelter from firefights in bullet-proof bunkers and, on several occasions, been evacuated to Juba. Dr. Atar has always stayed behind in Bunj.

“Now I can do physics and chemistry homework with my oldest.”

He acknowledges that his choice of work has been hard on his wife and four children. He sees them only three times a year. The family lives in Nairobi and Dr. Atar tries to keep in contact by WhatsApp and email several times a week. “Now I can do physics and chemistry homework with my oldest,” he says. “When I was in Kurmuk I wrote letters that took a month to arrive.” 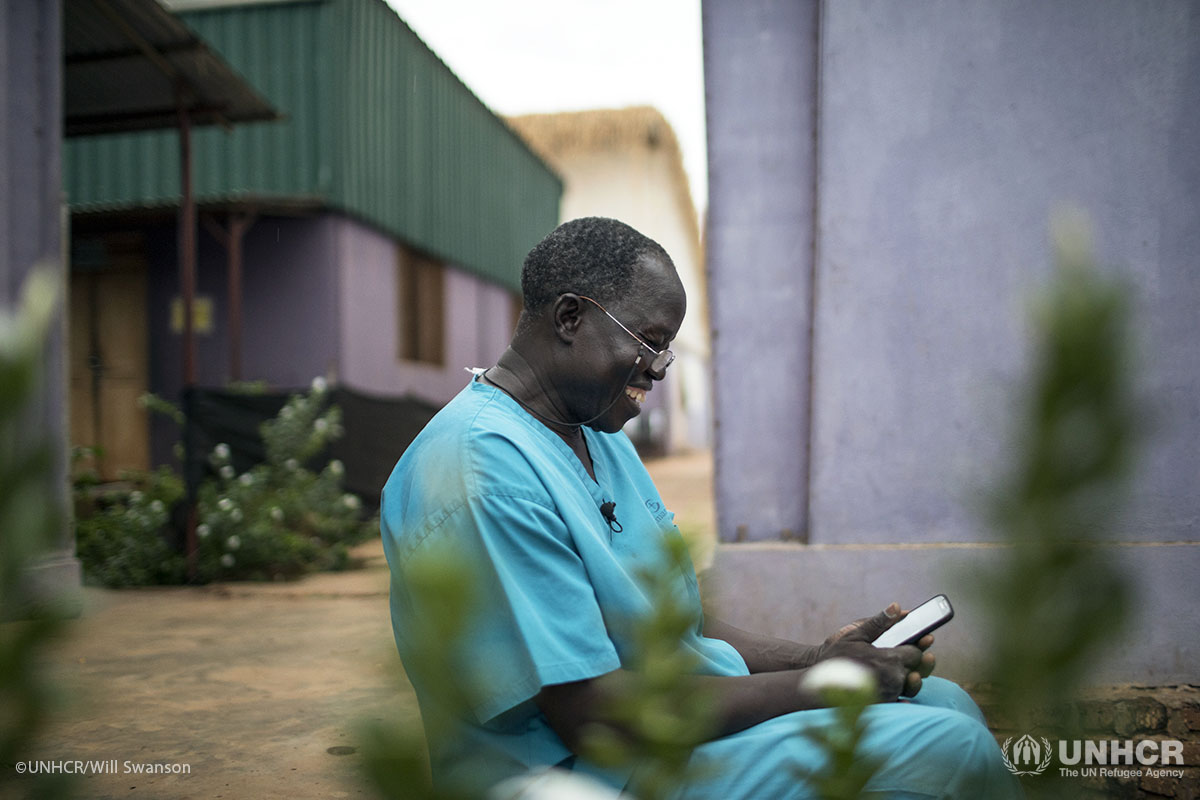 Dr. Atar does not believe he is doing anything extraordinary. He lives in a weather-beaten canvas tent and keeps a treadle sewing machine on his porch which he uses to make surgical linen.

He says he gets his energy from drinking milk. He relaxes on Sunday by going to church or taking a nap outdoors lying on the bare springs of a rusty bed.

“It’s like having air-conditioning,” he says. He loves singing. He sometimes works 24-hour shifts and likes to joke that his nurses call him a dictator.

As he does his rounds, teasing children, discussing family planning with a mother recovering from her third cesarean, urging a man with an amputated left arm and a shattered right femur to learn to walk using a single crutch, it is clear that his main source of happiness is not just operating but connecting with his patients.

A Christian, Dr. Atar, who is fluent in the region’s main language, Arabic, prays with patients before they are put under anesthetic and, according to their religion, recites the Bible or the Koran.

“I am most happy when I realize that the work that I have done has saved somebody from suffering or has saved his life,” he said. “But healing is not the medicine alone. You have to assure the patient. The moment you relate to a patient, they will open their heart to you… When a patient dies in my hands I am so sad.”

Part of his job is improvisation. If the need arises, especially during the wet season, when malaria is rife, he doubles up patients in beds and can add an additional 60.

Electric power is provided by two generators and solar panels. Dr. Atar requires all doctors to have basic mechanical skills. These came in handy recently when all systems failed at the beginning of an operation. There is no blood bank. Many people here believe they will die if they give blood. Dr. Atar has no qualms about pressuring a patient’s relatives to donate.

Dr. Atar says it is unlikely he will retire. The hospital is what gives him hope and meaning to his life. “The more good services you give, the more people come,” he says with a chuckle.

Here’s how you can help…

Refugees who have been forced to flee their homes often arrive hungry, exhausted and in need of medical care. UNHCR not only provides immediate, lifesaving care, but also provides prenatal care for pregnant women, immunizations for young children and treats people with chronic long-term conditions. When you start your monthly gift today you’ll be providing medical care, shelter and other lifesaving relief to vulnerable people around the world.