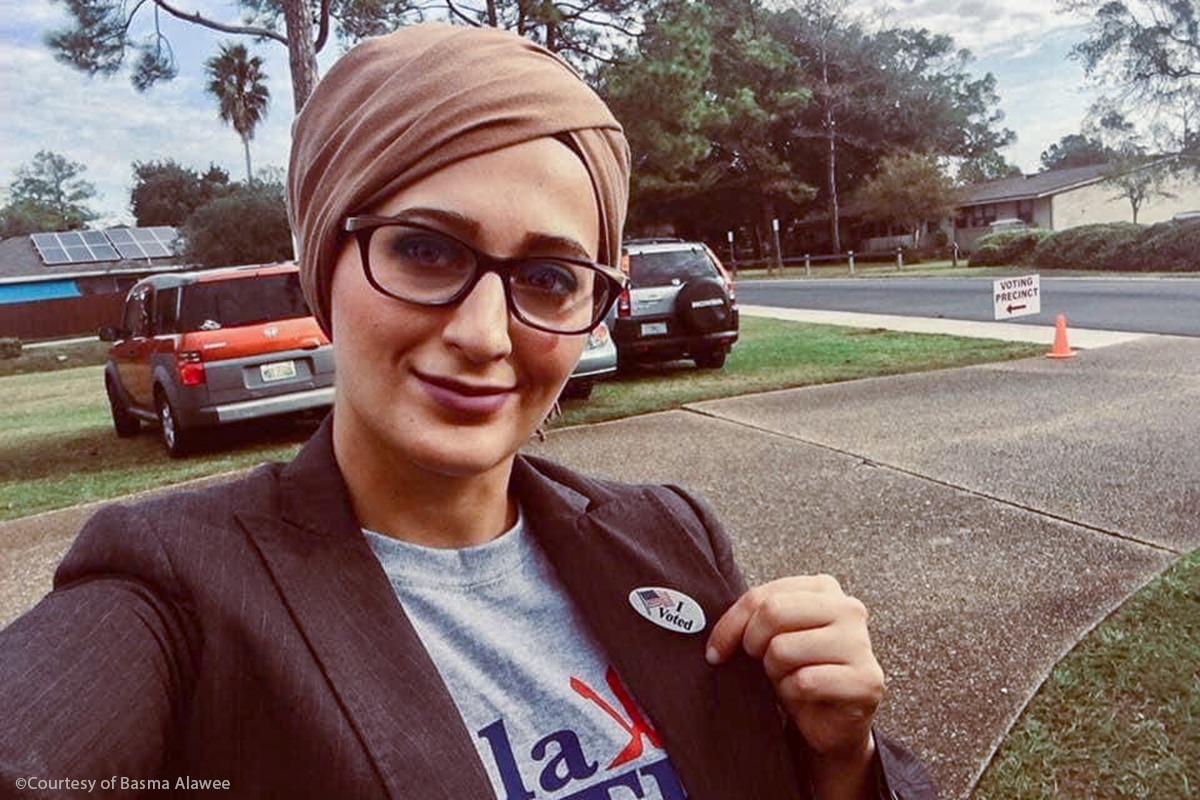 Basma Alawee is a former refugee from Iraq who became a citizen of the United States in 2016. She is the Florida Refugee Organizer for the We Are All America project at the Florida Immigrant Coalition. She co-founded the non-profit organization, WeaveTales, which focuses on empowering refugee voices and is the Florida delegate for Refugee Congress.

USA for UNHCR Communications Manager Nicholas Feeney recently spoke with with Basma about making the U.S her new home, about voting and her advocacy work in the refugee community.

I grew up in Baghdad, Iraq. I come from a big family and both my parents were teachers, so everyone knew me because of my parents. My parents were people who helped the community. My family’s house was always a place where, if people needed something, they were welcomed in. In 2003 I was about to go to college but then, another war started. I finished my degree in Material Engineering, and I found my dream job. I was happy because I still had my wonderful family around me. We were all either working or going to school, but there was always a war. It’s so hard to imagine a good day when you didn’t know if your family was going to be able to meet at night and eat dinner together again.

Why did your family flee Iraq?

In 2010, our lives came under threat because my husband was working with U.S. companies in Iraq, trying to educate both sides about the differences between our cultures and trying to reduce the death toll. He believed in what he was doing and I supported him. To seek safety, we had to leave behind our loved ones, without even being able to say goodbye to some of them.

What was it that got you started in your public life and refugee advocacy in the U.S.?

When I first arrived to the U.S. I thought, "Hey, it's a free country. I can speak up. I can help make changes." But of course, I was so new and didn’t know anyone. After living here for about a year I was invited to speak in D.C. to share my story as a refugee who came from Iraq. After that first public speaking event, some media reached out and they told me that my story had really made a difference. That moment made me feel that [refugee] voices can make a difference and we should not stop.

You became a citizen in 2016. How did that impact your advocacy work?

As an Iraqi coming to the United States, the first goal that we put in our mind is, "When am I'm going to become a U.S. citizen?" So, the first thing, is just counting how many months, how many days until I can become a U.S. citizen. After I became a citizen, my advocacy involvement really increased. I feel inspired every day to keep going, keep advocating for refugees and make sure that these stories are heard and our voice is counted.

You’re voting in your first general election, but can you talk about the first time you voted in 2018?

Actually, it's interesting. It wasn't just me voting. I helped mobilize a group of people to vote that day. It was pretty much a celebration. We mobilized volunteer drivers to take new voters and community members to vote. We had a party where we had cultural events and we did henna and many amazing things, because we wanted people to participate. And there were many new voters like me, who were so excited. That election was really important to me. Although the person I was supporting lost, I learned a lot and was more aware about the election process. If you are not in it, you're not going to understand it at all.

Your mother was visiting from Iraq during the election in 2018. How did she react to your participation?

I was so happy because I could show my mom the electoral process, because she never lived it before. I was a speaker at an event and she was so proud. She said, "Basma, when are you going to run?" This is my mom, who never spoke politics! And she was so proud that I am part of this kind of environment, where my voice is heard. That election was so special to me.

Do you have any political heroes that inspire you?

I’ve been really inspired by Ruth Bader Ginsburg. I watched her documentary on an airplane a couple years ago, and it just resonated so much with me. Since that moment, I fell in love with her. I started following her. I think that kind of women's story will inspire more people. Even with her death, she is making a difference.

This year marks the 100th anniversary of the 19th amendment, the right for women to vote in this country. Does that history inspire your work and your civic engagement?

Yes, it does. I come from a country where there were no fair elections, and I speak everyday with community members who come from countries where there may never have been elections at all. I talk to women who maybe could never vote before and I share with them that people fought to get women the right to vote in this country. This is one of the talking points that I use when speaking with women in our community. I do feel women are more involved now, these women tell me, “It's my kids who I need to make sure that their voices are heard.” Because at the end of the day, women have more stuff to worry and to care about. They are the mothers and worker, and hopefully they will take advantage to vote this time.

23 million naturalized citizens in the U.S. can vote in this election. What do you think needs to change in order to get more new citizens to vote and participate?

It's a really positive thought, but at the same time, it’s 23 million who need to be educated about the process. We focus a lot on the citizenship test, but we forget about what needs to happen after becoming a citizen. There's a lot that need to be done, and we can’t wait for an election to educate people. It's great to become a citizen, to become naturalized, but it can't stop there. We need to do more work around civic education and about the responsibility of engaging.

Join Basma in voting this election day! As a national, nonpartisan organization we want to help American citizens like you fulfill your civic duty. At the USA for UNHCR Civic Action Center, you can register to vote, look up your candidates, find your voting location and more.