Charity Tooze, Sr. Communications Officer for the United Nations High Commissioner for Refugees (UNHCR) speaks with CNN about how the Kony2012 video has brought attention to the issue of child soldiers, refugees and human trafficking and what the UNHCR is doing to help these children recover.

Of the nearly 34 million people the UN Refugee Agency (UNHCR) protects, at least half are children. Separated and displaced children are at great risk of recruitment by armed forces. Displaced children lack adequate food, shelter and social structure making them highly vulnerable to recruitment into armed forces. Children are not only used as soldiers, but laborers, cooks, porters, and drug runners. Girls are at serious risk of being sexually violated.

UNHCR is working on a joint task force in South Sudan to help rescue and rehabilitate children who have been abducted by the LRA throughout Central Africa including the Central African Republic, Uganda, DR Congo and South Sudan. In 2011, UNHCR and partners helped 50 child soldiers demobilize. This year, the UN Refugee Agency is working to expand this program. Additionally, in Colombia, UNHCR works with the local government to refer child soldiers to rehabilitation and reintegration programs. 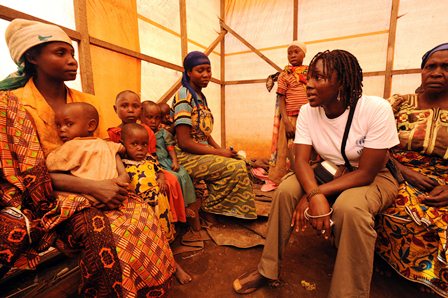 A UNHCR staff member talks to displaced Congolese women in Lushebere Camp. “We had been sleeping in the bush and returning to the village during the day for eight months and we just couldn't do it anymore. I am so tired. So, we came here,” said one woman, whose husband was abducted. “Now I am alone with four children.” © UNHCR / S. Schulman, August 2011.

Education is a primary form of prevention for children. Only 36% of refugee children have access to education. Helping fund UNHCR education projects is a direct preventive measure.