Javier* no longer feels fear when he smells paint fumes.

The 11-year-old still does not like the smell, but it no longer triggers flashbacks to that night in Honduras, when members of a criminal gang opened fire on the house he shared with his mom, stepfather and little sister. As the family cowered together on the floor, one stray bullet perforated a paint can, and it exploded. Another pierced Javier’s left thigh.

Now living in northern Mexico, after his family were recognized as refugees, Javier helps his mother Dania* paint the house every year. His room is forest green with red and green circles on the wall. The combined living room, kitchen and dining room is terracotta; his parents’ room is yellow.

“I got him painting so he would get over that trauma,” says Dania. “I tell him, ‘Look son, no one here is going to do anything to us. Here we have a lot of support so nothing will happen. We are safe here.’”

“Here we have a lot of support. We are safe here.”

Four years after fleeing Honduras, the family is stable, happy, and thriving. Now they are looking forward to becoming Mexican citizens, the next step in their refugee journey. Under Mexican law, recognized refugees are exempt from having to take a naturalization exam and can apply two years after receiving permanent residency.

Reaching a point of stability for refugees can take years. To better serve them, the Mexico operation of UNHCR, the UN Refugee Agency, is embracing an ambitious multi-year approach to planning that focuses on solutions, such as effective integration. “With protracted refugee situations, one year is not enough, and only planning over several years ensures the continuity of programs,” says Diego Morales, senior program officer for UNHCR Mexico. “This means we can accompany refugees from the moment they request asylum to when they are fully integrated into their host communities.”

Mexico is one of 24 of UNHCR’s country operations worldwide that are adopting a similar mid- to long-term approach to planning. By 2024, the entire organization will transition to this longer-range planning model.

Javier’s family has come a long way since they first arrived in Mexico, in 2017. Cesar*, Dania’s husband, has a steady job at a furniture plant, where he works night shifts cutting wood pieces that will eventually become sofas and chairs. Dania runs the house, ensuring that Javier and his 6-year-old sister, Nelly*, keep up with their schoolwork and lessons, which are still held online because of COVID restrictions.

Dania also oversees the children’s physical education classes, using her phone’s video to record Javier on the soccer pitch, according to the school’s instructions. She bursts with pride at the deftness with which Javier dribbles the ball, his fancy footwork revealing no hint of the wound from four years ago. 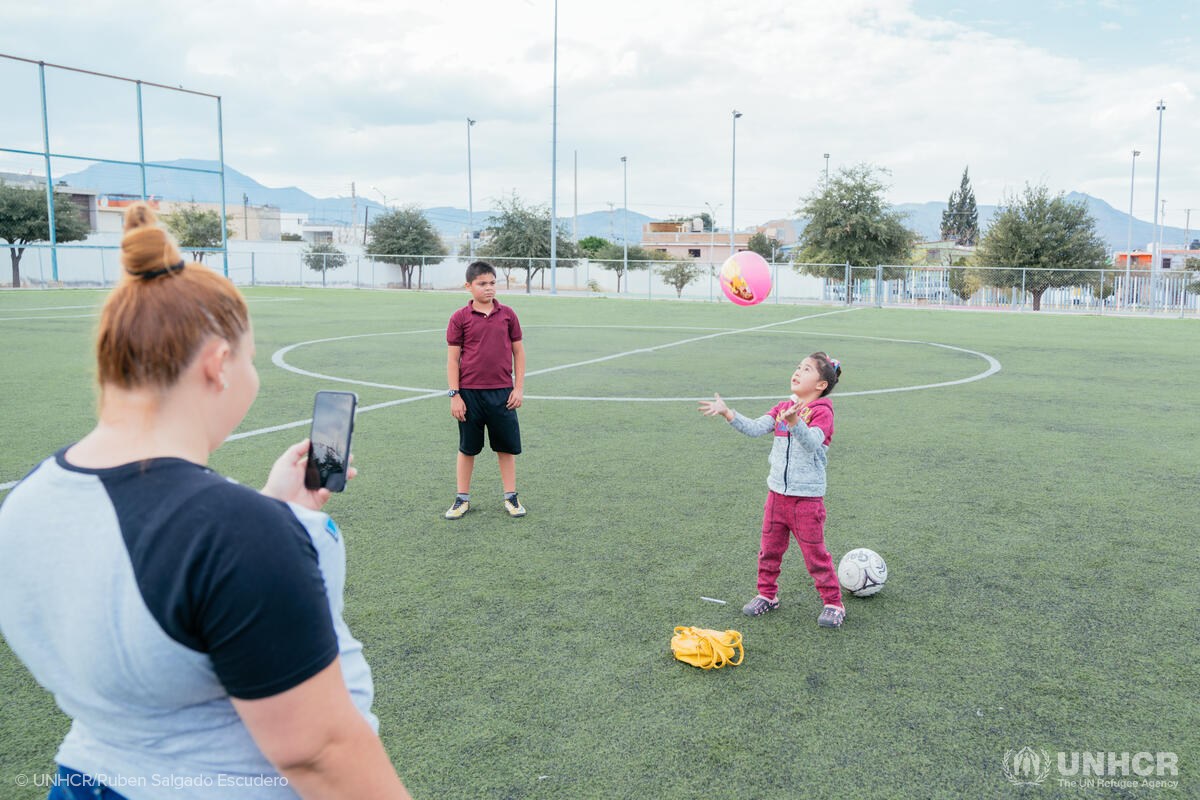 When the family arrived in Mexico, then-7-year-old Javier was unable to walk. Doctors in Honduras had extracted the bullet from his leg the night of the shooting, but the family did not have time for him to undergo any further treatment. The same gang members who had wounded Javier were waiting outside the hospital doors to “finish us off”, Dania remembers thinking.

“Here, I see a great future for my children.”

She and Cesar spirited the bandaged boy and two-year-old Nelly into Guatemala and then to Mexico, where they finally began to feel safe. “We could breathe because … we knew they (the gang members) couldn’t find us,” says Dania.

UNHCR lawyers helped the family lodge an asylum claim, and through a UNHCR humanitarian assistance program, the family was able to rent a small house and buy modest furnishings to tide them over while their asylum case was considered by the Mexican Commission for Refugee Assistance. “I had no idea what asylum was,” Dania recalls, adding that if it meant they could stay in Mexico, that was all they needed.

Once they were recognized as refugees, Dania, Cesar, and the children were included in UNHCR’s then-nascent Local Integration Program, which helps refugees relocate from the south of the country to the north, where jobs are more widely available and the prospects for integration are greater.

For Cesar, it sounded almost too good to be true. “We didn’t know anything about [the north of Mexico] and we were a bit wary,” he says. “The whole way [on the bus from Chiapas] we were wondering, what will happen to us?”

As it turned out, good things were in store for the family. With UNHCR’s support, Dania and Cesar found a house, Cesar secured a job at the furniture plant, and the family was able to leave the past behind.

“Here, I see a great future for my children,” says Dania.

The next goal is to obtain Mexican citizenship, and the family has the paperwork ready. Cesar says he already feels Mexican and is looking into a bright future. “When the national [soccer] team plays I root for Mexico,” he says. “I am going to celebrate with pride when I get naturalized.”

USA for UNHCR and its compassionate donors have been strong supporters of the Mexico Integration Program, funding more than $4.2 million since 2018. The program has helped thousands of families restart their lives and represents a new and innovative way donors are helping refugees thrive.