BOYABO REFUGEE CAMP, Democratic Republic of the Congo, October 8 (UNHCR) – As a fisherman, 36-year-old Jean came to rely on the Oubangui River for a living; but today he looks across it from exile and thinks only of death and suffering. 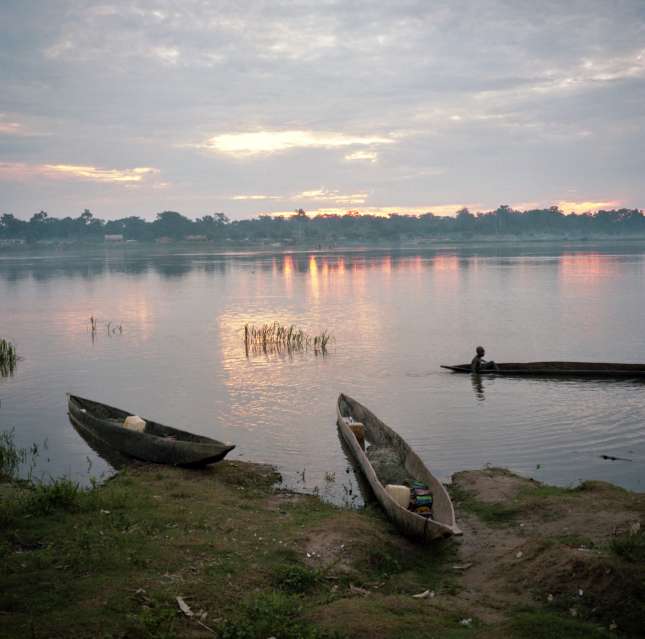 The sun sets as a young boy paddles on the Oubangi River at Batanga village, Equateur province in Democratic Republic of the Congo. The Central African Republic can be seen in the distance. © UNHCR/B.Sokol

"I cannot cross the river [to his native Central African Republic] because the Seleka are waiting for me on the other side," he says, referring to the former rebel coalition that toppled the government in March and killed his mother and many others. Jean is among more than 40,000 people who have fled the continuing violence and crossed the river to Democratic Republic of Congo's Orientale and Equateur provinces.

He says he did try to go fishing one day from Batanga, the riverside village in Equateur where he first found shelter with his wife and two children, but "they called me over and beat me." After that, he says, just looking across the Oubangui to Central African Republic makes him feel scared, but he feels safer since moving further from the river to the UNHCR-run Boyabo refugee camp.

He calls Boyabo the "promised land," and it's a bit easier to understand why after he tells his story. Like many others, Jean was caught by surprise at the speed of the Seleka advance and capture of the capital, Bangui, on March 24.

People were tense in his village, Batalimo, but he did not feel his life was threatened. That all changed on March 31, when armed men came to his home shortly before midnight after being told by other villagers that his mother sold palm oil and was relatively rich.

"My wife and my kids were sleeping at my mother-in-law's. I was alone with my mother. We heard someone knock at the door. I told my mother not to open it," he tells UNHCR, adding that several men with torches broke down the door. "They saw my mother in bed. They asked for money. As she had no money, they slit her throat. I was hiding under the bed. They did not see me," a weeping Jean recalls.

The assailants looted the simple home before leaving. The terrified fishermen stayed under the bed until morning, when he found his mother's body. "Eight young men had the courage to help me bury my mother. After the funeral, I found my wife and my children in the forest and we went to the ferry port of Zinga," he says.

They spent the night with the head of the locality and crossed the river to Batanga the next day. But it was still too close for Jean, who was unnerved by the sight of Seleka fighters across the river and feared they might follow him over the Oubangui.

In Boyabo, Jean seems quite relaxed and even happy, but he is still hurting – mentally over his mother's death and physically from the beating. He and his family were transferred to the camp in mid-August and quickly started trying to establish as normal a life as possible for themselves.

When UNHCR visited, he was looking forward to resuming life free from fear. On a hot sunny day, he keeps busy by cutting the grass around his shelter. He hopes that he will soon be allocated some land so that he can start growing vegetables for the family.

At midday, he takes a break and goes to join his wife and children at the communal kitchen where they have. They are surrounded by other families, each with their own dark memories and wondering if it will ever be safe to return to their troubled country.

Boyabo was opened last June on a site where it was easier to ensure protection and security for the refugees, who had been living along the river. Located some 12 miles from the Oubangui, it currently provides shelter to more than 3,600 refugees. UNHCR coordinates the work of seven partners in areas such as health and sanitation, shelter construction, social services, and distribution of food and non-food aid items. Jean benefits from these aid distributions, but, like the thousands of other refugees who have arrived in the DRC, he is uncertain about the future.

Silvestre Zawa, who was also transferred to Boyabo from Batanga with his family, said he was working for the Central African Red Cross Society as a water and sanitation technician when the fighting came to the capital. "The military groups were firing and killing people, we were disoriented and we ran in different directions," he said, adding that he became separated from his seven-year-old daughter.

Thanks to the family reunification program run by the Congolese Red Cross with support from the International Committee for the Red Cross, he was reunited with his daughter the day before he was transferred to Boyabo camp.

Ironically, Silvestre used to help Congolese refugees at a camp in Batalimo. Today it's his turn to be a refugee in the DRC and to live in a camp, but he hopes he can use his skill to help his fellow refugees in Boyabo by ensuring a steady supply of potable water for them.

Both Silvestre and Jean fear that their stay in the Democratic Republic of the Congo will be a long one. "There is no peace on the other side [of the Oubangui River] and I don't want to cross before there is peace," Jean said firmly.

By Céline Schmitt in Boyabo Refugee Camp, Democratic Republic of the Congo.