Refugees in Ethiopia choose their own housing - and create jobs

DOLLO ADO, Ethiopia, April 8 (UNHCR) — Life in a tent in this refugee camp used to spell sleepless nights and fraught days for 33-year-old Mako and her six children. "I could not sleep at night," the Somali refugee recalls. 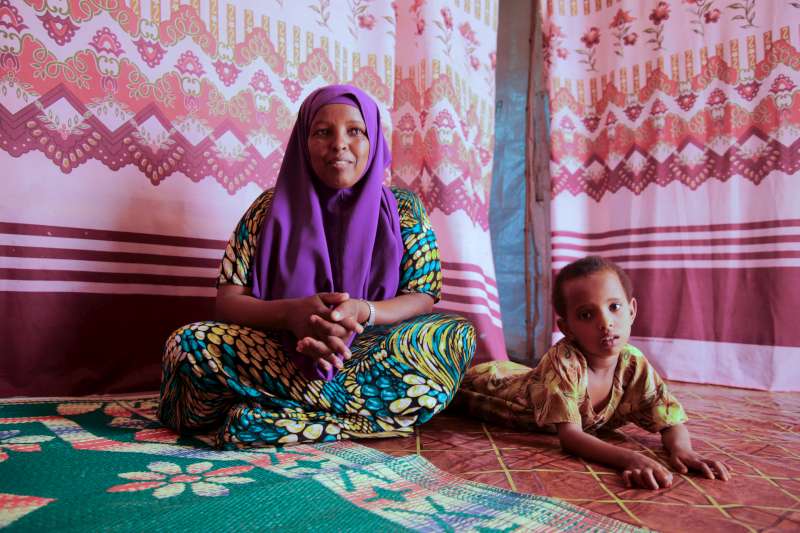 Somali refugees Mako and her six children moved into a new bamboo shelter last year, after living in a tent for several months in Kobe refugee camp, Ethiopia. ©UNHCR/R.Nuri

Even during the day, she says, "I would come back home and find my tent cut open and the sacks of sugar and rice missing."

But now she proudly surveys the bamboo shelter in Kobe camp that her family moved into last year. "My children are safer here," she says contentedly. "I can now lock the windows and the door."

Mako's new home is one of 7,200 so-called transitional shelters that UNHCR and partners have constructed in the last year in five refugee camps in the Dollo Ado area, some 621 miles south of Ethiopia's capital, Addis Ababa.

The new homes signal the transition from emergency response to recovery. In 2011 the emphasis was on quickly opening three new camps to provide a haven for the 100,000 Somalis who fled drought and insecurity in their homeland. Kobe, where Mako lives, sprang up, along with Hilaweyn and Buramino camps.

The look was the classic UNHCR refugee camp picture – rows of tents. But these days, as the emergency phase of the UN refugee agency's response in southern Ethiopia ends, the camps are starting to look more and more like rural villages.

That's because providing refugees with a more durable and dignified shelter became a pressing priority for UNHCR last year. "We invited refugees to be part of the solution rather than blindly packaging a shelter model for them," says Anicet Adjahossou, shelter specialist for UNHCR in Dollo Ado.

UNHCR began discussions with refugees, the authorities and partners to develop a compelling alternative to emergency tents. "After two months of consultations and focus groups, we decided to produce and pilot three different models," said Adjahossou.

Three partners working with UNHCR in the camp – Norwegian Refugee Council (NRC), Danish Refugee Council and Africa Humanitarian Action – each built a transitional shelter prototype based on specific requirements, including the social and cultural background of the refugees, local availability of materials, climate and weather patterns and livelihood opportunities.

"On behalf of all refugees, we chose the NRC shelter with bamboo walls, steel roof and mud plaster," says Mako, who is also a member of the refugee committee in the camp. "It reminded us of our houses in Somalia."

Covered with corrugated iron sheeting, the shelter is suited to hot climates like Dollo Ado, where temperatures can exceed 107 degrees Fahrenheit in the summer. "It remains cool all day long," she says, unlike tents, where refugees found it hard to breathe under the intense sunlight of the afternoon.

Luckily for the refugees, new homes also brought new jobs. More than 300 trained refugees and local residents now manufacture shelter components – bracings and roof frames – at workshops in the five camps. Another 150 workers from the refugee and host communities have been trained to assemble shelters on site. If they want better insulation, refugees can plaster their homes themselves.

So far, just under 20 per cent of the 190,000 refugees in the five Dollo Ado camps are living in these new shelters. Funding shortfalls mean UNHCR may not reach its goal to put 60 per cent of the refugees into such houses this year, Adjahossou says.

Meanwhile, house-proud Mako is doing what any new homeowner would – decorating and inviting the neighbors round. "I hope many more refugees will be able to enjoy greater living space, privacy and dignity," she says, showing off the red and pink carpets covering the walls and the floor of her living room.

"While my children are asleep, I can invite my neighbors for tea in the next room. Or I can also lock the door and spend time with just my family."