SULIMANIYA, Iraq, October 16 (UNHCR) – When Abdul and his family fled from the Syrian capital of Damascus earlier this year and sought shelter in the countryside, they were escaping from ethnic persecution. But the crucial decision to cross the border into northern Iraq was for his youngest child. 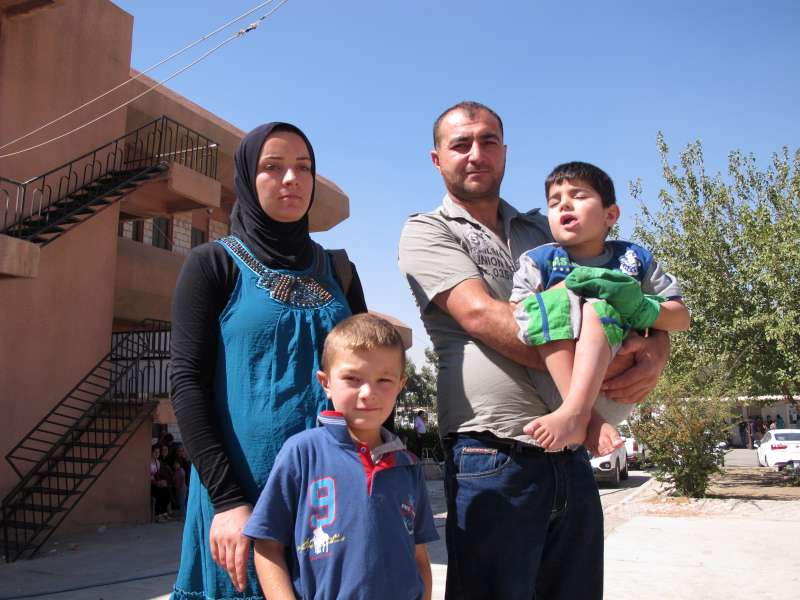 Abdul with his wife and two boys in the safety of northern Iraq. He is holding Sulimaniya, who needs special medical treatment. ©UNHCR/B.Farell

"The main reason we have come here is for our son," he tells staff at the UNHCR office in Sulimaniya, explaining that six-year-old Muhammad was born with cerebral palsy and needs intensive physiotherapy as he grows.

"We trust in God that we will be able to find treatment for him," says Abdul, a tailor by trade and Syrian Kurd by ethnicity. "I'll travel anywhere to get treatment for my son," he adds, gently holding Muhammad in his arms. Registration with UNHCR will open up access to many rights, including that vital health care that the boy needs.

The journey to find professional care for Abdul's youngest offspring has led him, his wife Saliha, eldest son Qassim, aged eight, and Muhammad to the village of Baziyan, near Sulimaniya in the Kurdistan Region of Iraq. It's not been an easy voyage.

Before the Syria crisis erupted in March 2011, they had lived a happy if quiet life in Damascus, where their home was close to the clinic that Muhammad attended for treatment. But over the past year things started to go downhill as the Syrian conflict escalated.

"We were threatened because we are Kurdish," Abdul reveals. "We were told to get out of town." The family moved from Damascus to Al-Hassakeh governorate in the north-east, but still did not feel safe and, critically, there was no physiotherapy available in the district for Muhammad. It was then that Abdul and his wife took the life-changing decision to cross the border into Iraq, following tens of thousands of other Syrian Kurds.

A month later, they find themselves registering as refugees at the UNHCR centre in Sulimaniya. They are among the 100 or so refugee families who are being registered each day in Sulimaniya, adding to the population of just under 200,000 Syrian refugees spread across the north.

William Tall, who heads UNHCR's team in the Kurdistan Region of Iraq, says the registration process, supported by the European Commission through its European Community Humanitarian Office (ECHO), is vital so that refugees can be counted and included in service delivery. "Registration is the first, and one of the most important, protection tools that we've got, because from it all of the other protections and services follow," he says.

Because Muhammad is living with disability, he is classed by UNHCR as a vulnerable refugee with special needs. The registration will ensure that he is linked up with specialists and receives the necessary health care and treatment.

But registration will also directly benefit the rest of the family, opening up access to the possibility of a residency permit, employment rights, food assistance and education.

The Kurdistan Regional Government provides free health care for Syrian refugees, as it does for the local population, however resources are stretched in meeting the ever-growing demand. UNHCR is calling on the international community to provide more assistance to neighboring countries, like Iraq, that are bearing the burden of hosting more than 2 million Syrian refugees.

Despite their own financial problems, many local communities in the Kurdistan Region of Iraq are sharing what they have with the arrivals from Syria. In Baziyan, the villagers have given cash and food to Abdul and his family and others. "There's no-one better than them in the world," he says of his new neighbors.

The donations have been so generous that Abdul has bought himself a sewing machine and plans to go back into business and to once again support his family and become self-sufficient – a goal encouraged by UNHCR.

It will be a long, slow process. As with their son's disability, there's no quick or easy cure for the challenges facing this family. But with the goodwill and generosity of the host community, and their own hard work and dedication, they're hopeful of a better future.

By Ben Farrell in Sulimaniya, Iraq