Mohammad Hasson has no words to describe his terrifying flight from Myanmar when he was just 8 years old, but his meaning is clear to those who understand his language of gestures and facial expressions. 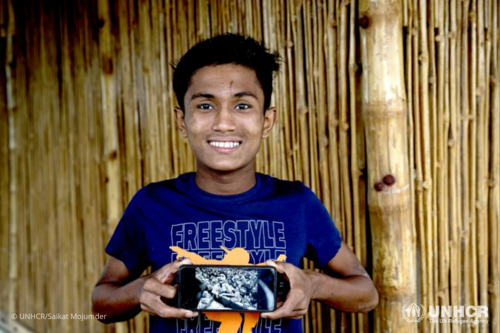 “They set our neighborhood on fire. I noticed gunshots from my house and fear struck my heart,” he signs, as his friend Sahat Zia Hero interprets.

Next, he gestures bombs exploding, running, and a long, painful journey to Bangladesh where he and his family joined hundreds of thousands of other Rohingya refugees in camps that were taking shape in the hills of Cox’s Bazar District.

Signing the pain of an empty stomach, he recalls the hunger that followed them across the border and that drove him to gather with a large group of other refugees as a vehicle arrived to distribute food and water.

“People were pushing each other to collect food,” he signs. “I climbed up on the vehicle. A photographer was standing on the top … I was crying and begging for food when the photographer took my photo.”

Hasson was given a food parcel which he took back to his shelter and shared with his family. He did not think about the photograph the man had taken of him until he later learned it had been seen around the world.

The photographer was Kevin Frayer. The photo of Hasson was among a Pulitzer Prize-winning series of black and white images he took that showed the influx of Rohingya refugees into Bangladesh starting in August 2017. During those first weeks, they arrived by boat and on foot, traumatized and exhausted, in such large numbers that aid workers struggled to assist them.

Five years later, more than 930,000 Rohingya remain in camps in the Cox’s Bazar region, including the more than 700,000 who arrived in August 2017. Over half are children. With few prospects for returning to Myanmar soon, and a lack of formal education or livelihoods in the camps, their future is uncertain.

Hasson, or “Asun” to his friends, is now 13. He spends his mornings like most other Rohingya children in the camps, attending a learning center. Afternoons are for playing football and wandering the camp taking photos with his mobile phone. 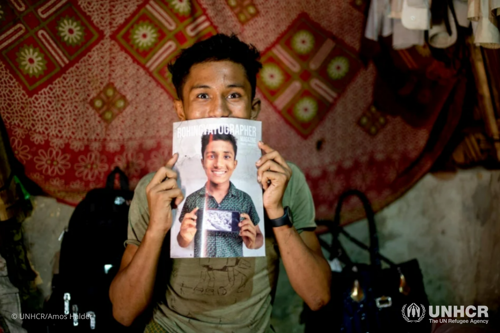 While after years of advocacy, the Myanmar curriculum is being rolled out by UNHCR, the UN Refugee Agency, UNICEF and partner organizations, there are still no education programs for children with special needs and limited opportunities for secondary-age children.

“Life is difficult as I cannot speak or hear,” signs Hasson. “I use sign language to communicate, which some understand, and some do not. There are many instances where I had to run to my home as people could not understand me.”

Hasson’s aunt, Johora Khatun, who has raised him since his mother died after giving birth, says he often roams far from home and gets into quarrels with people who do not understand him.

“I worry about his future,” she says. “Raising a child in this situation is difficult.”

Hasson has learned to write and draw, skills he uses to communicate with those who do not understand sign language. But his favorite mode of expression is photography.

“Everyone becomes happy when I take their photos.”

“I like to do photography the most,” he signs. “Everyone becomes happy when I take their photos.”

Sahat met Hasson two years ago at the Rohingya Cultural Memory Centre (RCMC) where he works, after recognizing him as the child in the photo taken by Kevin Frayer.

“I found him to be smart and talented,” he recalls, adding that he had no problem communicating with Hasson as he grew up using sign language with two cousins back in Myanmar. Hasson combines his own signs with more widely-recognized ones.

After noticing that Hasson was eager to learn how to use a camera, he began teaching him photography.

“Hasson has the mind of an artist. He got to grips with photography within a short time,” he says.

Sahat has helped gather together young Rohingya photographers who are using photography and social media to document their lives in the camps. Together, they launched the Rohingyatographer magazine, with the support of David Palazon, a Spanish designer and former curator of the RCMC, who gave Hasson a mobile phone with a camera so he could develop his skills further and contribute. The first issue was released in May with a photograph of Hasson on the cover, holding the famous photograph of him taken by Kevin Frayer. His smiling face is in sharp contrast to the image of him from 2017.

Inside the magazine are some of his own photos. “I take photographs of elderly people who are going through a hard time. I take photos of shelters which got wrecked by landslides, of disasters such as fires. People will understand our feelings and challenges when they see [the photos] on social media,” he signs. “They will know about our urge to get educated. I want people to assist us more and think of us by seeing my photographs.”

Sahat has his own dreams for Hasson. “I wish for him to become a world-renowned photographer,” he says. “We cannot bring change for everyone, [but] I am doing my best to bring light into Hasson’s life.”